The Two Quilts of Madame X

The location: undisclosed
The date: unrevealed
The source: anonymous
The job: provide quilt history
The payoff: images for my files

A quilt consultation was set up.  Here is the client’s story:

I don’t know anything about these quilts.  I knew we had some in our family, but never particularly cared about them.  But my sister and sister-in-law argued over them so much, that one day my  mother had enough.  She took me aside and said, ‘I have put those quilts in the trunk of your car.  Get them out of here!  Go, go, go!’

Now I would like to know more about them and what I should do with them.

Since her possession of the quilts is a secret from some family members, I will refer to this quilt keeper as “Madame X.”

Fortunately both of her quilts were textbook examples of quilting history, so I was able to help her.

The first one was a crazy quilt, which is a type of decorative coverlet, a conglomeration of irregularly-shaped patches, often of luxury fabrics like silk and velvet, and often bordered with decorative stitches.  A coverlet in this category may not be an actual “quilt” as it may not have a batting layer in the middle, or quilting stitches going through all the layers.

Crazy quilts were a fairly short-lived trend.  Janet Haigh in her book Crazy Patchwork, says that the trend was thought to be sparked by the display of Japanese art at the Centennial Exposition in Philadelphia in 1876.  In Clues in the Calico, Barbara Brackman says that 1884 was the peak year for magazines’ mentioning of crazy quilts, and by the late 1880s they were already criticizing the trend.  She also says that “The dated quilts from the 1880s were most often made entirely of silk; in the ’90s more wool and cotton was used in combination with silk…” (p. 144), and that gave me a clue for this quilt’s age.

Madame X’s quilt displays a common problem of this type of quilt — many of the silk pieces have entirely shattered, due to the metals being used in dyeing silk back then.  (It wasn’t dyed so much as “dynamited.”)  I was happy to reassure her that this damage was not her fault.  She and her family really couldn’t have done anything to keep the silk intact.

Where the silk patches have fallen away, the underlying white cotton foundation cloth is visible.  Many of the remaining patches are wool, which may mean it is more likely to be from the 1890s.  It does not have any batting, and it is tied rather than quilted. 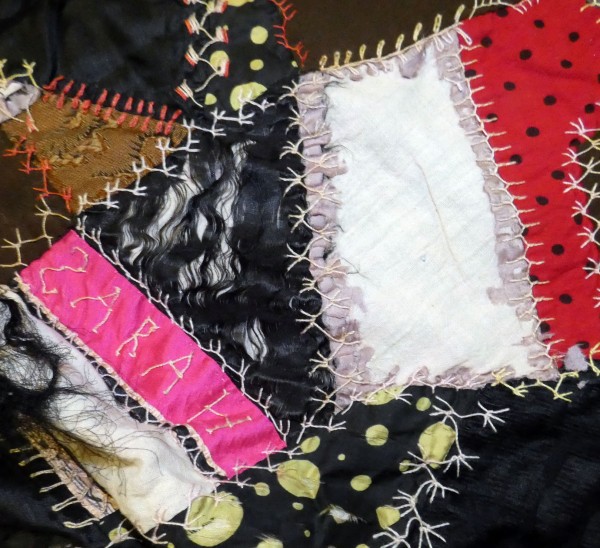 Silk in many stages of destruction — some patches have holes, some have only warp threads left, some are gone except for where the embroidery thread holds fragments.

It has some lovely hand-stitched embellishments.

The back is made of two pieces of woven plaid; at least one of them is wool. 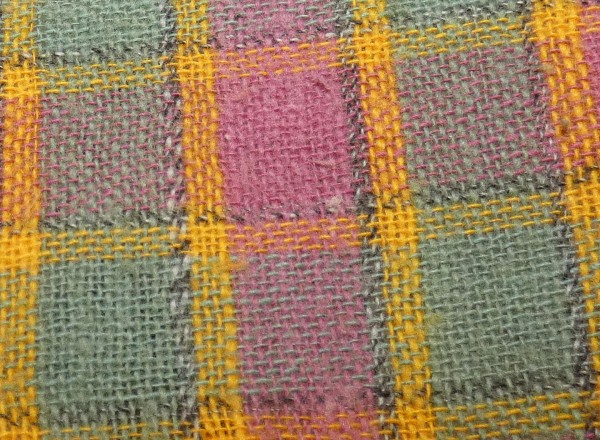 Singles wool woven into a plaid.

The second piece was a quilt top.  It has 16 blocks of hand-pieced eight-pointed stars, with the star points composed of smaller diamonds.  Maggie Malone in 5500 Quilt Block Designs calls this star variation Little Star — it is like the beginning of a Lone Star, but in these blocks, the placement of the fabrics is more scrappy and unpredictable than in a regular Lone Star.

The light and bright cottons point to a construction date of the 1930s through 1950s.  For fabric dating, I depend on Eileen Jahnke Trestain’s 2-book series, Dating Fabrics.  Here I used her Volume 1, which covers 1800 – 1960.  Some of these blocks seem like they were pieced to provide illustrations for her descriptions!  I will put quotes from her book in the captions and you will see what I mean. 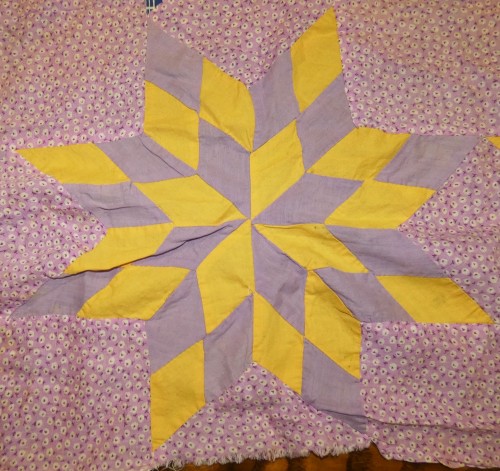 “Yellow gold with lavender was a common color scheme…” This is the only block with all solid-color pieces.

“Intense bright green, as well as yellow greens and chartreuse, were common in the 1950s.” 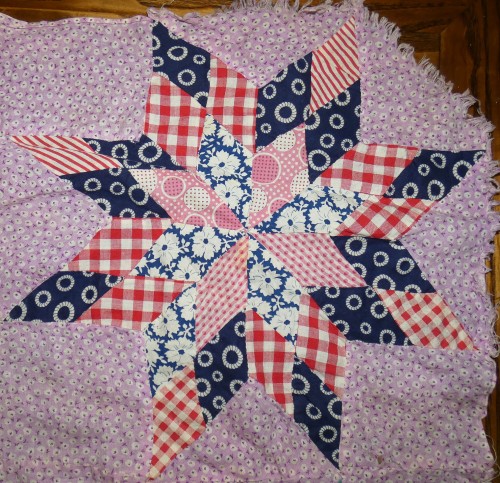 “Navy blue was just coming into its own as the 1940s and 1950s progressed. Red and white were the norm for color accents…Navy blue fabrics with polka dots in any size were available.” 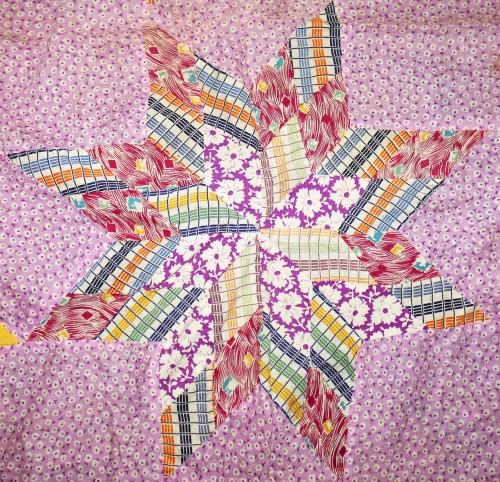 “During this time, it appears that someone went wild with the color wheel…” 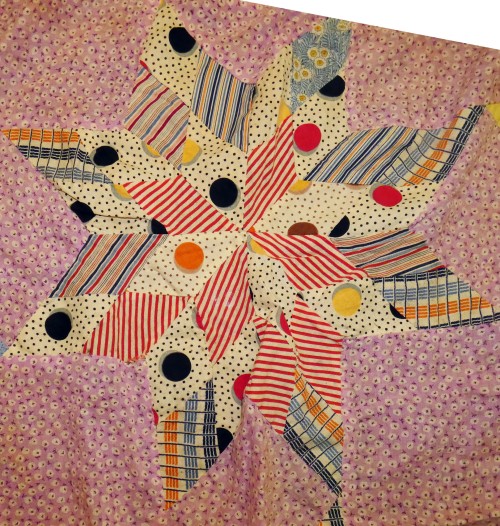 Words cannot express how much I love that giant dot fabric.

My initial assessment was that this was a 1930s flour sack quilt, but after reading Eileen Jahnke Trestain’s tips, I am inclined to date it a little later, maybe the 1950s.

But I instantly knew why the maker never quilted it — she had a lot of trouble with the bias edges in those diamonds, and the blocks do not lay flat.  Some of them are extremely puckered.  I think this would be a very difficult block to get right, especially when using scrap fabrics that have different thicknesses and stretch qualities.

Eight-pointed stars made with half-square triangles, or with one large diamond per point, are seen more often than this variation with small diamonds making up the points.  I did find one lovely and thorough tutorial on making a large-scale version, by Kristy Ward, on Moda Bake Shop.  She gives  many helpful tips in managing the points and seams.  Moda labeled it an “ambitious” project and I can see why.

My advice to Madame X was that it would be very difficult to replace the missing patches in the crazy quilt, and to get the Little Star top to lie flat enough to be quilted, but that she might want to stabilize that one with a muslin backing and a binding.  For now she decided to take both pieces to a family member who is in the arts, and see if that person wanted them for photography.  She also thought that ultimately she might have the lavender one stabilized, and then give it to her sister for a Christmas present.

I had so much fun looking at these quilts, and I can’t thank my anonymous source enough for setting up the meeting!

22 thoughts on “The Two Quilts of Madame X”