Since I am apparently just going to make quilt tops for the rest of my life, and never finish them, I thought I would post a few.

A benefit to this photo session was that I got lots of exercise going up and down the steps to take pictures from the balcony!

Quilt blocks set out on the deck, as seen from the balcony.

Last year I was given bags and bags of pre-cut squares, and I really enjoy grouping them by theme and color family and turning them into tops.

For this first one, I used up every single square of neutral-colored, horse-themed fabric. 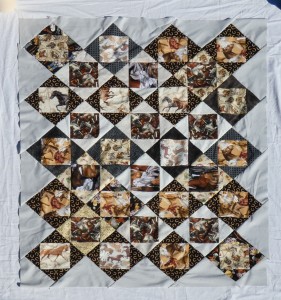 I don’t think I have ever made such a neutral-colored quilt before, but I like it, it reminds me of the mosaic floors at St. Mark’s in Venice.

In the donations, there was a huge assortment of kid fabrics that called out to be put into “I Spy” quilts, so I made four alike.  There are 48 different fabrics in the large squares, and some repeats in the small squares. 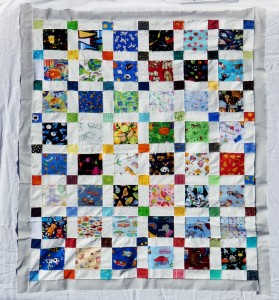 Two of the tops have gray borders.

Here are some of the fun fabrics. Out of every 6 prints, 5 are from the donations and 1 came from my stash or a few new purchases.

After staring at one of the quilts one day, it occurred to me that I could have made them with the disappearing nine-patch method!  So I started another top to check that out.

Ordinary nine-patch blocks. Each fabric is a 6-inch square. 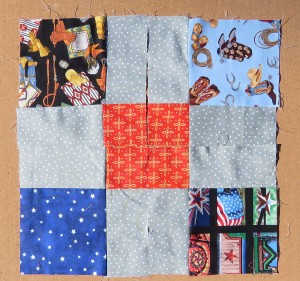 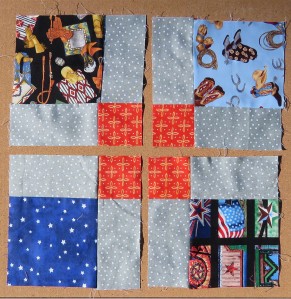 Step Two) Cut it apart in the center, vertically and horizontally.

Step Three) Turn the pieces for different effects and restitch. This arrangement gives a sash and cornerstone look, which is what I was going for in the kids’ I Spy quilts. 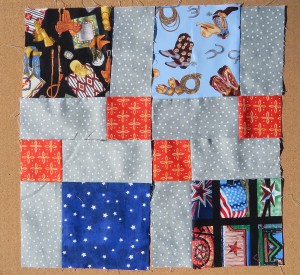 Yet again Step Three) This arrangement makes the large squares appear to float over the red squares.

Here is a diagram I have posted before to illustrate the concept.  (For some reason, out of everything I have ever done, this is about the only thing pinned on Pinterest, and it is pinned way more than I think it deserves.)

This diagram shows how cutting up a 9 patch and rearranging, makes it look like you did lots of fancy piecing. It only shows one choice on turning the pieces but there are others.

I am still deciding on the final arrangements.  Here are some possiblilities:

Here I took the cut quarters of the nine-patch and turned each small red square to the bottom right. This gave it the look of adding sashing and cornerstones to the larger squares, and I was seeing how I liked columns of the same sashing.

This one still has the sashing and cornerstones look, but with the gray sashing fabrics in the center.

This one has rows of small red squares together between the rows of large black and blue squares.

This one has the most movement, to my eyes.

I think I am going to go with the second option, the gray center with the sash-and-cornerstone look.  I will be more precise with where I arrange the large blocks though, and move matching ones farther from each other.

I have heard that whether you create this design the traditional way, by cutting pieces of various sizes; or this way, by piecing nine-patches first and then recutting, the actual amount of cutting is the same.  By my reckoning, for eight of the blocks (each having one large square, one small square, and two strips), it would take 19 cuts the traditional way, and only 12 the nine-patch way.  And for the finished quilt, I will have to cut small pieces to balance the sashing all around, so maybe that will make it about the same.  But for me, making nine-patches first certainly feels like a lot less fussing with picking up pieces, matching corners, etc.

One of these days I am going to have to quilt some of these!