Three Clues in the Parchment

In the early 1960s, a young agriculture historian named M. L. Ryder had the idea to use parchment manuscripts to research medieval sheep breeds.

He surveyed manuscript illuminations for evidence of the colors, conformation, and wool types of sheep from the past.  Few descriptions of sheep were written until the eighteenth century, so he was looking for clues to breed formation — were sheep raised more for wool or for milk and meat?  Where were new types of sheep imported from? Were the fabled Spanish Armada sheep survivors real?

You can see the list of images he found in this article (p. 10 of the PDF of the article)*, but thanks to the fabulous British Library, I can show you a few of the images themselves.  (And I would encourage you to go look at them on the British Library site, because you can zoom in to your heart’s content.)

Creation, page 2 v, from the Holkham Bible Picture Book at the British Library

That book, the Holkham Bible Picture Book, has a lot more sheep images that Ryder didn’t catalog.  I don’t know why.  Maybe he only had access to a copy of the page above and didn’t even know there were more.  So let me show you another really good one:

Cain and Abel from the Holkham Bible Picture Book, p. 5r, from the British Library.  The bottom part of the page shows Adam talking to his sons Cain and Abel, and the top shows them sacrificing the best of their labor to God. 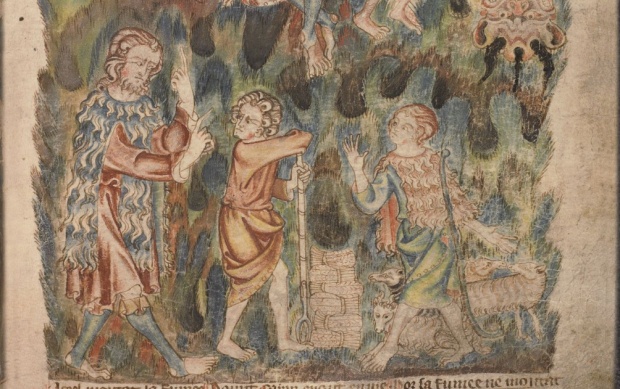 Detail from page above. Here the Biblical shepherd Abel has quite a flock, and he and Adam are wearing sheepskin clothes. Brother Cain, a farmer, is not.

Okay, back to Ryder and the sources he studied. 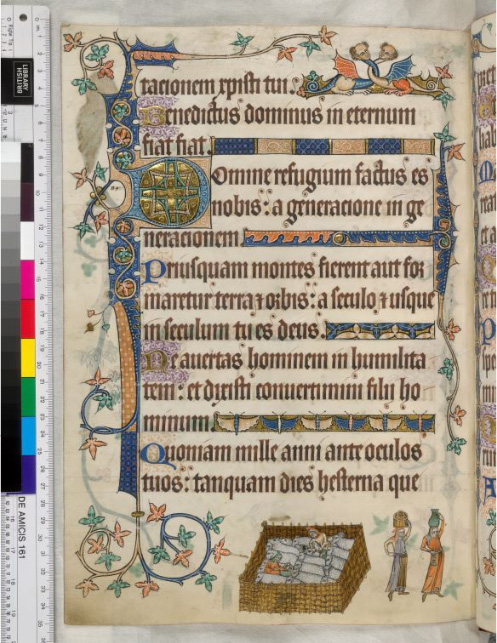 Detail of page above, showing 20 sheep being milked and shorn; 2 have horns.

Ryder listed about 40 sources for sheep images, from Roman times to 1825 AD.  From those, he noted face color, horns, fleece type, and other comments.

He also considered church carvings, and paintings.  And one of my favorite art history comments ever, is what Ryder said about the van Eyck Adoration of the Lamb—  you know, from the Ghent Altarpiece, one of the most famous and most stolen pieces of art in the world — when commenting on the Mystic Lamb, he wrote “good mutton conformation.”

From the study of these sheep images, Ryder felt you could tell a lot about sheep history.  He noted that most of the images showed the types of sheep found in the times and places the illustrations were made.

But he didn’t stop there.  These ancient documents were written on parchment, which was made from the skins of sheep (as well as calves and goats).  He realized that wool fibers remain embedded in the parchment, and analyzed those!  Getting the fibers from a manuscript as opposed to a piece of clothing has the advantage that the manuscript is dated.  Ryder analyzed about 100 wool fibers from seven centuries.  He created a chart showing how British sheep breeds probably originated and evolved. He surmised that the expanding towns of the 16th and 17th centuries caused more of a demand for meat, and as more land was enclosed,  farmers were able to control and protect their sheep better.  They brought in larger meatier animals, and the medieval emphasis on fine-wooled sheep faded.

Ryder continued to write about sheep and fibers up until 1987 (including an 846-page book!), but the story of parchment analysis continues.

Now in the 21st century, researchers are still uncovering clues to history from parchments, but with a new process – extracting DNA!  At the Borthwick Institute for Archives at the University of York, bioarchaeologists tested some tiny scraps of parchment for genetic information.  Like Ryder, they were looking for evidence of sheep breeds and characteristics .  They chose scraps from a relatively late time period, the 17th and 18th centuries, spanning a time when breeders were looking to improve the quality of British wool [after losing that quality during the 16th and 17th, according to Ryder?  I  don’t know. I’m just reporting the research]. The parchment study resulted in much more complete information than what has been available before, from bone fragments.  Unlike bone, the parchments’ dates are known, and there are millions of them available, in known locations.

Since “wool was essentially the oil of times gone by,” as Trinity College Dublin professor Daniel Bradley said, researchers hope this  parchment study method will reveal more information about the economy and trade of past centuries.  You can read the whole story here.

And thank you to Neighbor Liz, for passing on to me the March 2015 issue of The Scientist magazine, where I first saw the DNA article.

*The first part of Ryder’s article on sheep breeds.  Both of these were in The Agricultural History Review in 1964.  Ryder wrote over 200 articles and I look forward to finding more of them!  And here is Ryder’s 1984 update on the two I referenced here.

And here is an excellent history of British wool.

← A Productive Spell
White Elephant Treasures and a Mystery Item →

6 thoughts on “Three Clues in the Parchment”