If I Made the Movies

One of the things that gets me through the blazing heat of August is Turner Classic Movies and their Summer Under the Stars.  I love to sit in a cool room with some needlework and watch movies all day.  But I can’t help thinking – What if I had been around to make movies during the Golden Age of Hollywood?  What would they have looked like?  (Cue camera dissolve and harp music…)

The Widow Wore White (1947)
A string of wealthy men die mysteriously within days of their weddings – the only clues are lace-edged handkerchiefs clasped to their lips.  A new husband, Peter Lorre, rushes into Sam Spade’s office after discovering the pattern, to accuse his wife, Lana Turner, and beg for protection.  Turner swears she is innocent.  Can Humphrey Bogart unravel the clues and capture the real killer?
Husbands played by Sydney Greenstreet, Charles Coburn, and Edward Everett Horton.

Captain Dyefast (1937)
Synopsis:  Errol Flynn is unjustly condemned to hard labor in the jungles of Verde Azul, to harvest the Lazuli-wood trees.  He leads a band of men (including Alan Hale, Herbert Mundin, and Eugene Pallette) to freedom aboard a captured ship. They rename her the Mordant, and sail the Seven Seas, seizing cargoes of precious dyestuffs and re-distributing them to poor dyers around the world.

To Catch A Couturier (1956)
Synopsis:  State Department staffer Cary Grant must ferret out which European fashion designer is passing top secret information to the Communists.  A mousy typist, Grace Kelly, is reassigned to assist him.  After a quick make-over, she poses as his beautiful society girlfriend.  As they cross Europe to spy in all the leading fashion houses, Kelly quickly realizes that the signal code is based on the way the models arrange their brooches, earrings, and bracelets, but holds off revealing her discovery until her wardrobe is complete!  Will they realize they are meant for each other?
Designers played by Danny Kaye, Eve Arden, and Nancy Walker – with cameos by Audrey Hepburn and Christian Dior! 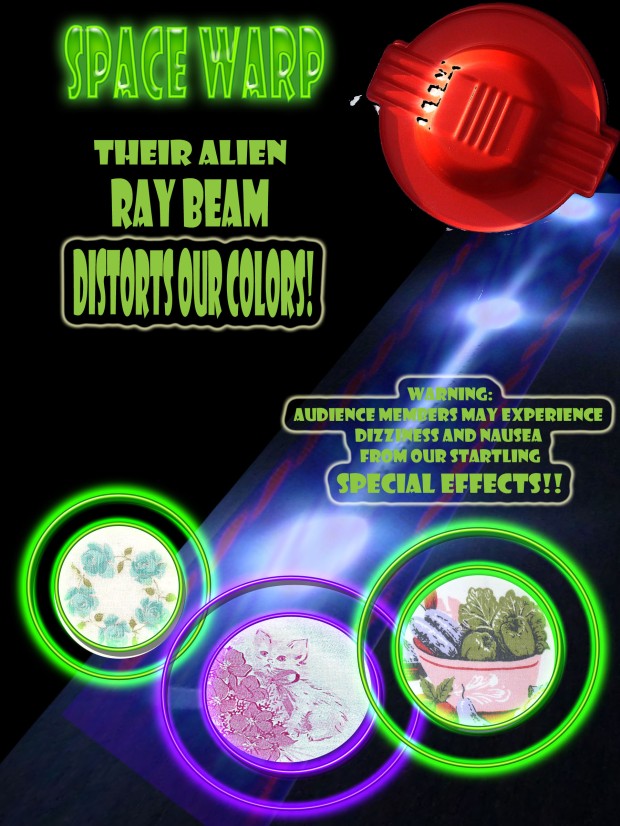 Space Warp (1957)
Synopsis:  Aliens come to earth and cause fear and disorder in society by merely altering the colors of everything from flowers to kittens to food.  This B-movie has achieved a cult following for its use of early op art effects and disorienting colors.  While the plot is supposedly about alien invaders, like many other movies of its time it was a commentary on the public’s disquieting ability to “see red” where it did not actually exist.  Cameos by Bela Lugosi and Michael Caine.

(harp music signals return to reality)  Well, those are some of the movies I wish I could watch!  I could go on and on – I haven’t even gotten to Esther Williams, Red Skelton, or Busby Berkeley yet!

Sources:  all movie star photos are in the public domain and are from Wikimedia Commons.   The background photos and textiles are my own.  I’ve had Adobe Photoshop Elements 3.0 for about ten years, but I learned a lot more about it while creating these posters!

← A Plethora of Leisurely Projects
Big and Bright Stitches →

13 thoughts on “If I Made the Movies”