One Little Scrap of Paper, So Many Stories

I am still spending a lot of time digitizing family photos.  This one doesn’t seem to fit in with any others.  It is from the Aunt Millie and Uncle Hugh collection – Aunt Millie grew up in Seattle and Uncle Hugh in Texas, but somewhere along the way they met and married and lived in Juneau, Alaska for years.  Most of their pictures are of local events or fishing or hiking, not busy streets and skyscrapers.

It is a very small black and white picture, just about 2.5 inches by 3, but there is so much going on!

From all of the uniforms visible, I would think we are in the middle of WWII.  Also, the big store sign on the left, half cropped out of the picture, must say, “Tailored Clothing, American Made.”  That “American Made” thing is always advertised during times of national stress.

Look at these two guys — are they turning different ways to see which way to go?  Or are they about to turn around and flirt with the girls behind them?

“I think we need to go that way. Or maybe these nice ladies will help us out with directions. Say, ma’am, how are you? If the war ended today, I would grab one of you and kiss you and we would be famous forever.”

This guy is the only one who notices the photographer.  He also looks a little concerned, as if he’s supposed to report possible spy activity.  And what is that great car parked across the street behind him?

“You there, what are you doing? Don’t you know there’s a war on?”

I had no idea where this might be, so I zoomed in on the signs for clues.  The one on the tall building says, “Puget Sound National Bank,”  but the one that really helped me was this:

I searched for Brewitt Bros. Clothiers, and found this ad from a newspaper from 1911. 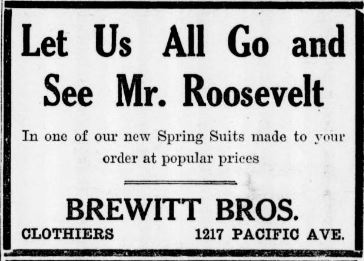 Brewitt Bros. ad from 1911. From Library of Congress.

The newspaper was the Tacoma Times.

I put that street address into Google Maps and got this:

Pretty amazing.  Those four-story buildings are gone, but the bank building and the streetlights are still there.

So I am surmising that Uncle Hugh had to travel to Tacoma during the war for some reason, and took a picture of the tall building to show the folks back home.  I may never know for sure but I love this little slice of life!

25 thoughts on “One Little Scrap of Paper, So Many Stories”