Following up on Viking Sails

Back in 2013, I visited the Maritime Museum in San Diego, California, and aboard one of the historic ships I saw a huge storage area set aside for extra rigging and sails, and it got me thinking about the textile half of sailing ships.  As I said then:

I was amazed at the amount of canvas the ship had to have on hand for emergencies.  It really sparked my curiosity – what fiber are sails made from?  Does sailcloth require special looms or techniques?  Were sailcloth weavers specialized workers?  Or did regular weavers weave up some sailcloth every now and then?  When was the switch to mechanization made?

I actually researched for a year before I wrote this post about sails in the Mycenaean world, and then a post about Viking sails.  And in the two years since then, I have kept an eye out for more information on sails and sailmakers.  It is harder to find than I ever thought it would be!

One note that interested me most was a story in the Spring 2011 issue of Wild Fibers magazine, in an article on Gute sheep.  I can’t find that issue now, but I remember a quote something like this:

Archaeologists made replica Viking sails out of Gotland wool, and their ships sank, and then they made them out of Gute wool, and the ships sailed.

I really wanted to know how critical it would be to use the wool of just one certain breed, and also, I wondered if the archaeologists really waited until they had full-size ships to try the sails out.  It seems to me that you would make some models first.  Also, how could you be sure it was just the wool that caused the sinking?

Gute ram. By Oskari Löytynoja (Own work) [CC BY 3.0], via Wikimedia Commons

It’s interesting to see how the research has grown over the years.

This 1996 account is by Amy Lightfoot, an expert on woolworking traditions in Norway and the Shetland Islands.  When a 650-year-old sail was found stuffed between rafters in a church ceiling as insulation, she was the one put in charge of creating a replica.  She had years of experience in interviewing elderly craftspeople about traditional skills, and for her, reconstructing the sail was a framework that helped her link bits of information together into an overall picture of sail-making technique.

She says that in the early summer, people gathered up the indigenous sheep (she doesn’t mention any particular breeds) for rooing, which is plucking the loose wool from the sheep, rather than shearing.  Wool from different parts of the sheep was sorted and set aside for uses as varied as shawls, work clothes, and sails.

Once autumn set in and the nights got longer, the stored fleeces were brought out and the locks opened, the long guard hairs separated from the downy undercoat, with men, women, and children working on the task by the light of the fire.  After this step, the wool was ready for combing and/or carding, and neighbors would gather to share the work and then have a celebratory dance.

Next it was woven in a twill structure on vertical looms.  Lightfoot says the weaving width was about 2 feet wide.  After weaving the cloth was fulled, then the individual lengths were sewn together by a sailmaker.  Finally the “finished sail was treated with a mixture of fir-tar, fish oil, and sheep’s tallow, brushed onto the sail to keep it windproof and water repellent.” 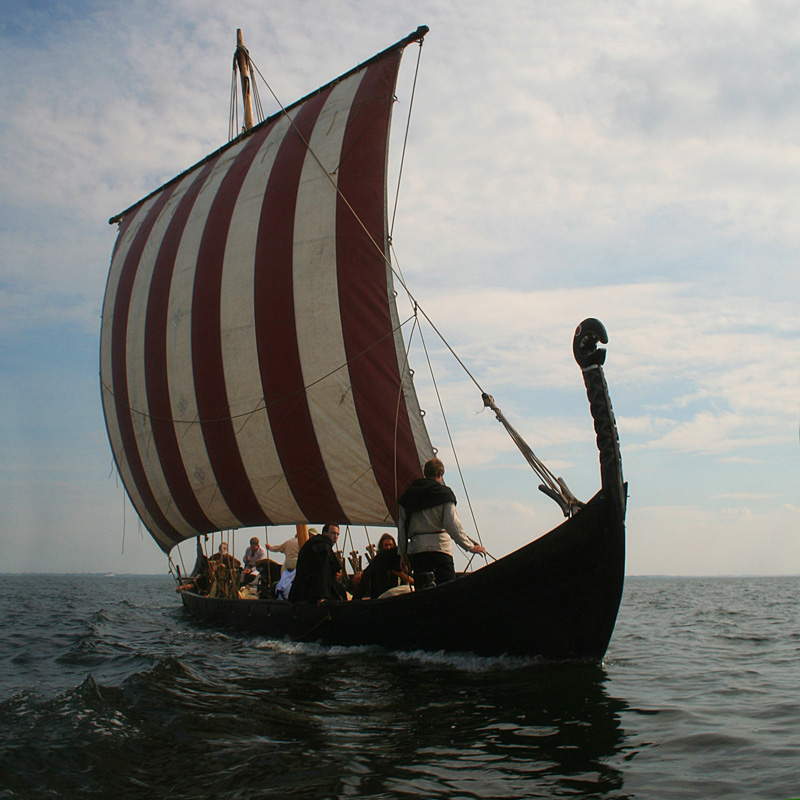 This year a story about the woolen sails was published in Hakai magazine: No Wool, No Vikings.  Journalist Claire Eamer sailed to an island with a group of Norwegian students, to gather a flock of sheep and roo their fleece.  Her article includes lots of pictures, and brings up another point about the impact of these sails:

Textile archaeologist [Lise Bender] Jørgensen says the introduction of sails must have greatly increased the demand for wool and grazing land. Norway-based historical textile researcher Amy Lightfoot has even speculated that the demand for pastureland might have driven the Viking expansion as much as the gleaming temptations of stolen treasure and legitimate trade.

Just how much wool was needed?  This thesis goes into the details of figuring it out.  (The page looks like it has a paywall, but if you scroll down the whole paper is there.)

I have also read the book The Far Traveler: Voyages of a Viking Woman by Nancy Marie Brown (and that very interesting book needs its own post), and according to it, a 1000-square-foot replica sail took almost a million feet of thread (100 square meters; 300,000 meters of thread), and it took two women four and a half years to make, using the wool of more than 200 sheep.

And as more ship burials are discovered, far from Scandinavian lands, researchers are theorizing that the need for sails might have been a factor in Viking explorations and raids.  This article in Science magazine (April 2016) says that it’s possible that they were capturing slaves to bring home for forced labor for their fleet of ships.  (Which would be sort of a fruitless cycle — you need sails, so you go out to capture slaves to weave the sails, so you need more sails for your next voyages…)

So I have not yet found any more information on specific wool breeds for sailcloth, but it does seem that the sails and sailmakers are getting some attention that is their due.

From the Viking Ship Museum in Roskilde, Denmark:

Woolen Sailcloth — a good explanation of different details of materials and techniques, but no illustrations or swatches.

A weaver working on sails (although they show her sewing, not weaving, and they only mention the fiber prep of flax and don’t go on to explain anything about weaving).

Hurstwic is an organization which teaches Viking combat methods, but their website also has a sizable reference section on Viking ways of life, including a very nice page on cloth-making.  There is a long article on Viking ships.  It has only a short mention of the sails, but the information on how the ships were built is well-illustrated and very interesting.

One thing I would never have thought of is that the shipbuilders went out to the forests and looked for trees that were already growing in the shapes they needed for certain parts of the ship.  Small models of ships have been found, which apparently were used to show the building crews what kind of branches and trunks to look for.  The natural grain of these curved pieces resulted in ship parts that were stronger than if they had been carved from straight-grained wood.  We produce timber on our farm and nowadays the only ones that sell are the very straight ones — it was interesting to me to read about a use for curved and crooked ones.

Were all those sail weavers willing wives?  Or possibly slaves stolen from other lands?  A recent article in Science magazine.

29 thoughts on “Following up on Viking Sails”