Barbers, bartered brides, and bullfighters, – they all get their own operas.   Pirates, demons, tsars, student princes  – they’re all thrilling characters, but if you ask me, textile artists are seriously underrepresented in the performing arts.  We have Mimi, the consumptive embroiderer in La Boheme, but that’s about it. At least we fabric aficionados can enjoy the costumes.

So, this weekend,  I was very happy to find a book filled with costume illustrations and photographs, The Standard Operas by George P. Upton (Chicago, A.C. McClurg and Co., 1914).

Marguerite, from Gounod’s Faust, which premiered in 1863. She sings a song at the spinning wheel in the third act. 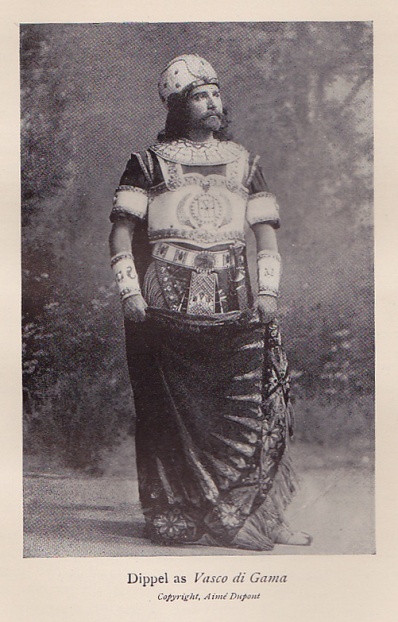 Vasco de Gama, from Meyerbeer’s opera L’Africaine, which premiered in 1865. I know nothing about this opera, but I love the embroidered detail on his cloak!

Two versions of Brünnhilde, from Wagner’s Die Walküre. What is a post about opera without a few Brünnhildes?

As I was paging through the book and admiring all the costumes, I noticed an opera title to warm the heart of a fiber fanatic –  The Queen’s Lace Handkerchief.  It turned out that Johann Strauss II, the Waltz King himself, the famed composer of the Blue Danube and Tales from the Vienna Woods, based a whole opera on a handkerchief!   It premiered in 1880, and I’m sure its original title in German, Das Spitzentuch der Königen, was an irresistible box-office draw.

Basically the plot is that the Queen writes a little note to the author Cervantes on her lace handkerchief, her enemy intercepts it and convinces the King that the Queen and Cervantes are having an affair, and then there are complications until the Queen talks her way out of it.

Interspersed among romantic songs such as “Where the wild rose sweetly doth blow” and “It was a wondrous fair and starry night,” are the well-known Truffle Song (“such dish by man not oft is seen”) and the “epicurean duet for the King and Premier,’ These Oysters’.”   How have I made it this far through life without knowing the Truffle Song?

Sadly, there are no pictures of costumes from this opera, or of the famous lace handkerchief in the book, so we will just have to imagine their glory.  I paid a whole eight dollars for the book, and I think it was worth it, just to learn that the German word for handkerchief is spitzentuch!

5 thoughts on “Waltz Across Textiles”