So we were in Presidio, Texas, buying ham and cheese croissants and chile rellenos from a grocery store lunch counter, and the lady didn’t speak any English, so I had to try my Spanish, but I must have done alright, because as we were leaving, the lady smiled and said, “¡Buen corriendo!”  (Good running!)

Thankfully, the government had reopened just in time for a planned trip to Big Bend National Park!

Big Bend is about 800,000 acres of the Chihuahuan desert.  It looks the way you expect all of Texas to be, if your ideas of Texas come from old Western movies (many of which were actually filmed in Monument Valley in Arizona instead of Texas).  I love Big Bend, and I have been there many times.  I was even a seasonal park ranger out there during the summers of 2006 and 2008.  So I know what to expect (more vultures and snakes than people) and what to bring (water, first aid kits, shovels to dig out your truck if needed, and more water).  And in the event someone were to say, “Hey!  Let’s go to Big Bend right now!” I am pretty much ready to just jump in the truck and go.

But this trip was a little different because I was going with four other people who hadn’t been there.  I needed to be the planner.  So instead of researching hikes that would be new for me, I chose from among familiar hikes and sights, to find activities that would fit with each person’s interests, fitness levels, and time constraints.  I came up with Plan A, for three solid days in the Park, with things to see on the travel days on either side (Big Bend is a 10 -12 hours drive from here in East Texas); and Plan B, for activities at Big Bend Ranch State Park, in case the federal government did not reopen. I even prepared a slide presentation – with handouts! – and Friend Liz hosted a gathering at her house so we could all go over the plan. 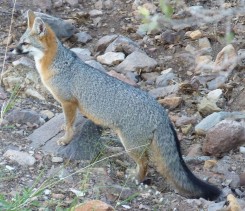 Gray fox in the Chisos Mountains.

The requisite view of the Window – looking into Mexico. 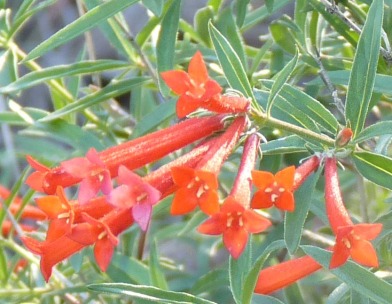 Is this in the Ludwigea family? Hmmm. 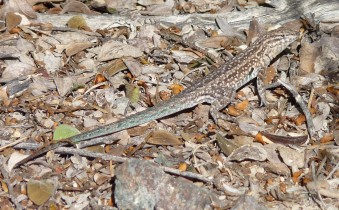 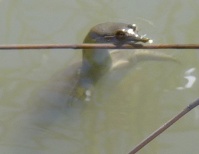 Sulphur butterflies along the Rio Grande.

I wish I had bought the Big Bend turtle book!

Liz, by the way, is the perfect travel companion.  She brought chicken tortilla soup for dinner for the whole group for the first night, a breakfast casserole for the first morning, and homemade trail mix bars for hikes.  She will go anywhere, from rocky ledges to sheds full of old bargain books to old cemeteries – and she likes it all!  She circles around while you stay still so birds you are trying to photograph are driven within camera range.  She stays awake while you drive and tells dozens of hilarious true stories, without repeating any of them!

In Big Bend, everyone was very flexible about adapting the plan.  Instead of driving to a popular hiking trail, we took the one that was right outside our lodging – and found mountain lion tracks!  When a 4-wheel-drive road was wet and muddy, we just turned around and came back two days later.  When I found out that my favorite ranger (and former supervisor) was giving an early evening program, everyone was fine with cutting birding short so we could go to hear his program.

It all worked out fabulously.  While revisiting many of my favorite places, I also got to have the joy of introducing them to new people.

Note: If you know herps and see that I have labeled these turtles and lizards incorrectly, please let me know!