This is the third in a series in which I look at my own textiles in the light of Mary Schoeser’s book Textiles: The Art of Mankind.

The essays in each section of this book seem very layered and dense to me, and generally, I am not finding threads of reasoning to follow.  They seem to be more of an association cloud, with bits of design history, artist’s philosophies, definitions, and even science facts tossed about at random.  (I would guess that’s the result if being so knowledgeable and so deeply involved with the textile world for years.  I believe her first book came out in 1984, but I’m not sure, because there is no biography of her on the web!!)

This third section, though, does have a structure I can follow.  It is divided into:

This section is filled with incredibly rich artworks, as well as simple utilitarian items.  Some show how a certain material can call forth its “soul-mate” structure.  For example, a thick and thin handspun single yarn practically demands to be shown off in a open-sett plain weave. Other objects show how a structure can take a material to a never-before-imagined pinnacle of beauty or interest.

Here are three I particularly love.

Warped by Heather Macali (2009) is a room-sized piece of 80 double-woven panels that shimmer.  From panel to panel, the design changes subtly in both structure and complementary hues of thread.

City #5 by Nancy Middlebrook is another shimmering double-weave piece, but in contrast to Heather Macali’s piece, this one is based on a grid design.

Contemporary Lace: White Shadow by Cecilia Heffer (2006) was inspired by Venetian lace of the 16th century, but created in a modern way, with machine embroidery on a soluble substrate.  (The link brings you a slide show.  The piece that was in the book is the picture that shows a white-on-white panel of circles, with a pale cast shadow on the left side.)

In this essay, Schoeser says, “While many collectors focus on a particular end product, there is equal satisfaction in taking a structural approach.”  She gives the example of Peter Collingwood’s book The Maker’s Hand, in which he documented and analyzed 100 woven structures from around the world.  She stresses that a wealth of techniques and structures are found all across the world, at all levels of society, and that exploring them can reinvigorate our work.

So with that in mind, I decided to do a little scavenger hunt within my own house, to see how many different structures I could find, in one room, in just 15 minutes. I found 20 different ones, with multiple samples of some of the structures like crochet and damask.  Some of the mass-produced samples like an upholstery trim and a bungee cord plait offer ideas that would translate well to craft works.

It’s just a utilitarian bungee cord, but obviously someone has a job designing their appearance!

Some of the examples look very much the same —

Lacy tablecloth #1 — a combination of biomorphic and geometric shapes.

But when you look at them close up, the structures are very different:

Detail of #1 – a knotted netting, with areas filled in with needle and thread. 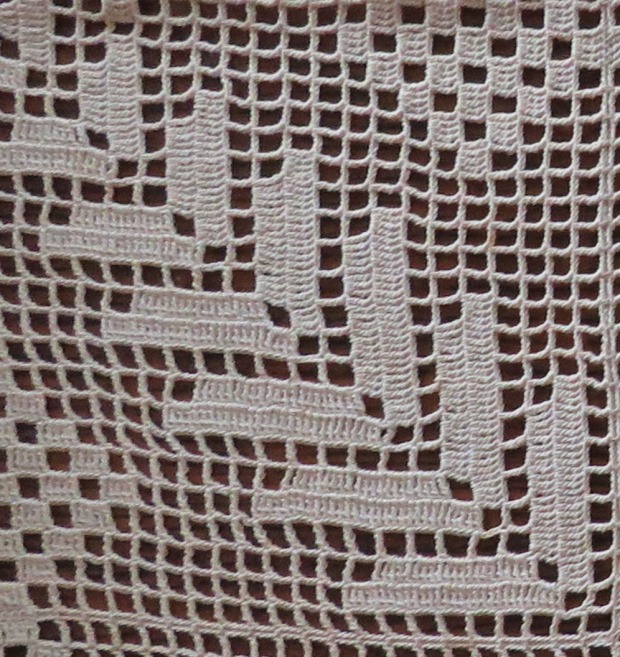 I don’t even know what to call many of the structures I found, much less how they were made, but even Mary Schoeser says, “One might expect today’s collectors to be better able to categorize their treasured textiles, but the global trade in artisanal production seldom reveals technical information, and the Internet’s ready supply of images of vintage and antique textiles often depends on general descriptions rather than precise identification.  Indeed, that can be part of the fun for the collector, or even the curator.” (p. 167) So at least I’m in good company.

And if you are interested in the “taxonomy of textiles,” a good reference book is World Textiles: A Visual Guide to Traditional Techniques, by John Gillow and Bryan Sentance, Thames & Hudson, 1999.

When I look at my own textile collection, the piece that zooms to the head of the class is this lace scarf.  The intricacy of the construction is what takes the silk thread from beautiful to glorious.

Silk scarf. It drapes beautifully on a person but does not lay flat well!

A scan of the lace.

Looking at the individual threads.

I wrote about it here, and at the time I thought it was needle lace. Now I’ve done more reading, and I think it might be bobbin lace.  If you can tell by looking at the pictures, please let me know!

When I look at my own work in terms of structure, I would say I am a jack-of-all-structures, master of none!  I love to analyze something I see and figure out how I would weave it/ piece it/ interlace it/ whatever.  I also love to look at articles and videos on technique and then try that technique for myself.  I would rather sample a lot of different structures than concentrate on becoming especially proficient at one or two.  And then I like to find other people’s masterpieces and collect them!