You know the image of our industrious forebears —

After studying textile history for the last 20 years, I had a hazy idea that that image casts our ancestors in a glorified light, but I didn’t know just how far from reality it is, until I read a Colonial Williamsburg book,  What Clothes Reveal: The Language of Clothing in Colonial and Federal America  by Linda Baumgarten (2002, The Colonial Williamsburg Foundation).

My previous assumption:  our self-sufficient colonial ancestors grew all their own fiber and processed it into all the clothing they needed, either themselves or by slave labor.

I never realized: “Colonial dependency on imported textiles began as soon as Englishmen and -women arrived on these shorts.  Historian Bernard Bailyn…compare the output of the most prolific weaver of Rowley, Massachusetts, with the yardages of imported textiles.  During a nine-year period from 1673 to 1682, the weaver produced less cloth than was imported in a single shipload.”  (p. 76)

“In the three-year period ending in January 1772, almost six-and-a-half-million yards of plain linens were exported to the colonies from Britain and Ireland…” (p. 78)

So instead of our lovely lass above, the truth is that our textiles were more likely to be produced like this:

“Many Americans did produce some textiles, yet, except for the period leading up to the Revolution, colonial textile production on a scale large enough to approach self-sufficiency was not economically advantageous…George Washington compared the cost of imported goods with similar items spun and woven on his plantation in 1768.  He concluded that the modest savings in homemade textiles were not enough to defray the cost of spinning wheels, of hiring a white woman (probably to oversee the work), and of clothing and feeding five female slaves.  Americans could not, and indeed did not want to, escape participation in the worldwide trade of consumer goods and textiles.”  (p. 78)

I was especially amazed at the amount of textiles that were imported to clothe slaves, and that, then as now, things were shipped around the world in a less than efficient system.  In the chapter Common Dress, Baumgarten writes, “…most of the textiles for slaves’ clothing were imported.  Colonists could acquire fabric from Britain, China, India, or Europe, as long as the goods first landed in England, as the law required, before being shipped to the colonies.” (p. 135)  She gives the example of a planter who in 1768, ordered from Liverpool “one thousand ells of German osnaburg, three hundred yards of Kendal cotton, one hundred yards of ‘plaiding for negroe Children’ and 60 ready-made ‘fear nothing waistcoats of the cheapest color.'” (p. 135)  [Osnaburg was a coarse linen, and Kendal cotton was a fuzzy wool fabric.  Plaiding could mean a white twilled fabric and not the multi-colored fabric we think of today.]

Another of my assumptions:  Every garment in a museum collection is a perfect and pristine example of a certain style of clothing, one moment captured.

I never realized:  Many garments in collections have been worn and even altered, sometimes decades after they were first created.  Textile historians can gain a lot of information from these garments as well as ones in mint condition.

“To analyze and catalog a collection of garments from any century requires thorough familiarity with the period and its material culture.  The process includes examining unaltered garments…familiarizing oneself with painting and print sources, understanding how people shaped their bodies, knowing what textiles were available, and recognizing period construction styles.  But costume historians need to know the same information about the centuries following because so many antique garments were altered when the original wearer changed shape, when styles evolved, or when ownership changed.”  (p. 184)

In colonial times, many garments were altered.  First of all, there was so much fabric in gowns that there was enough to completely remake a dress.  Sometimes the decorative under-petticoat was used to make a whole new bodice.  And cloth was so expensive, that it was cost-effective to put in the labor to remake an item.  One of my favorite  examples shows a man’s silk waistcoat that was remade when fashions changed — the original long front flaps were cut off and turned into a standing collar, and the pocket flaps were also turn to become welt pockets situated higher up on the waistcoat.  Many of these altered garments are in the Colonial Williamsburg online exhibit.

Another assumption:  Davy Crockett, one of our Texas heroes,  was a real frontiersman and wore buckskin. 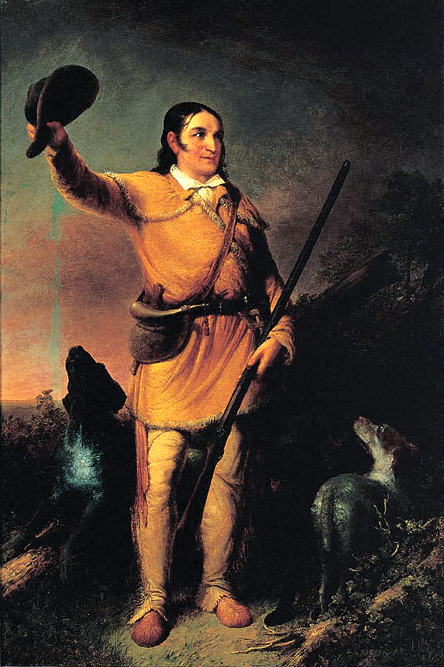 Say it ain’t so:  Davy borrowed hunting clothes for his famous portrait, and was described by others as ordinarily wearing conservative and respectable clothing.  I guess he was no different of politicians of our day who choose whatever costume (or sometimes, lack thereof ) that will make them appear most manly and interesting.  What Clothes Reveal has a whole page about this famous bit of American legend.

These are just a few of the things I learned from this book.  It is full of period illustrations and photos of actual garments, both whole garments and interesting details.  I also appreciated its emphasis on everyday clothing.  Again, almost every garment from the book is online at Colonial Williamsburg at the link above, but the book has so much more information than is available there, that I recommend reading it too if you are interested in historic clothing.

You can also look at 371 individual garments indexed here, and there are also interesting slide shows about different aspects of colonial life, including this one on how flax and hemp were processed.  Author Linda Baumgarten is interviewed in a video about costume accessories.

24 thoughts on “What Clothes Reveal”