Here is a look at precocious children from the past, courtesy of Punch magazine of London.

As a former teacher, I can relate to this one, titled Missus-ism.

Proud Mother (to the new Maid). “We parted with Sarah, because she was so sharp with our dear, sweet little Harry, who has such animal spirits, you know; throwing everything about, or kicking his football through the window — perhaps he’ll kick you too — but you must not mind it, for he’s such a lion-hearted, sensitive little fellow.” 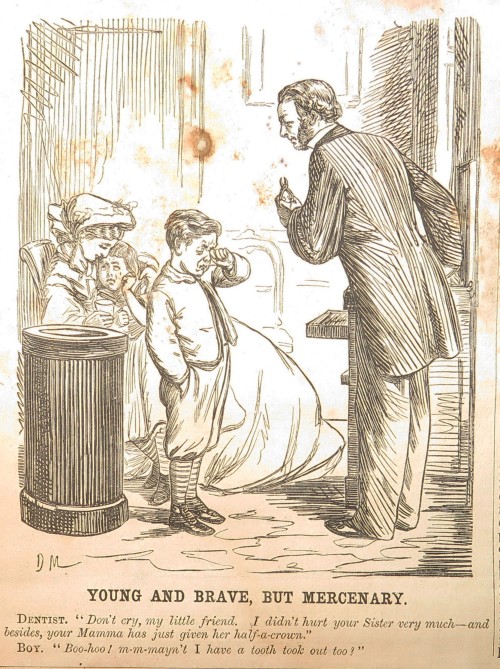 Dentist. “Don’t cry, my little friend. I didn’t hurt your Sister very much — and besides, your Mamma has just given her half-a-crown”.
Boy. “Boo-hoo! M-m-mayn’t I have a tooth took out too?”

Uncle (who is rather proud of his cellar). “Now, George, my boy, there’s a glass of champagne for you — don’t get such stuff at school, eh? Eh? Eh?”
George. “H’m, awfully sweet! Very good sort for ladies — but I’ve arrived at a time of life, when I confess I like my wine dry!”

Grandpapa. “I’m afraid, Johnny, we shall not be able to get to the Bazaar today, while it rains thus.”
Johnny. “Never mind, I’ll tell you what; I’ll toss you and Grandma ‘odd man’ with my Half-Crown.”

I don’t know what “odd man” is, but this one is my favorite, because I have a little tintype where the woman is wearing a dress that is very similar to Grandma’s in the cartoon. 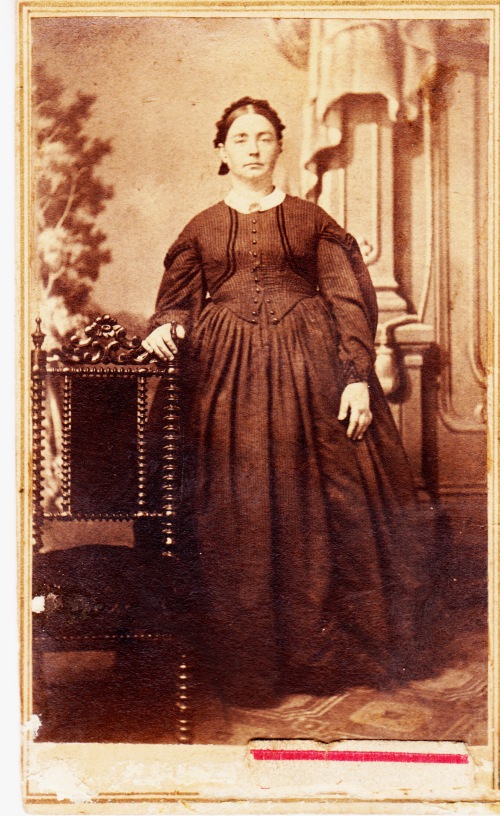 Tintype, circa 1862?  I thought maybe this lady was expecting, but perhaps she is just stout like the woman in the Punch cartoon.

And lest you think that Punch only satirized the behavior of boys, I’ll finish up with one of their observations of a little girl’s behavior:

Fanny (after a morning’s mischief at Grandma’s). “Ah, I’ll tell you what we’ll play at now. You shall be dear, good little Fanny, and I’ll be cross, disagreeable, old Grandma.”

Grandma does not look too upset.  Perhaps she remembers making a similar comment to her grandmother when she was little!