Here’s a little family history:  my great-grandmother Grace had four daughters, and they all embroidered pillowcases, and then crocheted lace edgings for them.  (They made lots of other things too, like dresser scarves, table cloths, and doilies.  They even had families and careers!  But since I never got to visit with them much, but did sleep on their pillowcases my whole life long, in my mind I see them primarily as Titans of Pillowcase Decoration.)

They embroidered way more pillowcases than we could use, but we appreciated all the love and craft that went into them, so we used the same few pairs over and over and carefully saved the others for the future when we would need them.  Because heaven forbid we ever sleep on regular, ordinary pillowcases that come with sheet sets!

As time went by, and family members started passing away, their stacks of unused pillowcases got handed down to other family members.

So last time I was home, my mother passed on a box full of pillowcases she had received from her cousin, Mary Alice.  The note in one of the tissue paper packages said, “From Aunt Jean.”  So I assumed that these pillowcases had followed a typical path through our family, something like this —  (you can skip this story if you want, but just know that all of these associations went through my mind in an instant, as soon as I saw that little note) — Great-grandmother Grace embroidered them, and gave them to her daughter Jean.  At some point, Jean felt like her sister Alice needed some cheering up, and sent her this lovely unused pair of their mom’s pillowcases.  Alice packed them away for future use with a note about who sent them.

Much later, when Alice died, her daughter Mary Alice got all her mom’s stuff, but couldn’t stand to go through the boxes for decades.  Then Jean also died, and when Mary Alice finally sorted the box, she thought it would be nice to send Jean’s pillowcases to Jean’s daughter, my mother, also named Grace.  Who, still having plenty of embroidered pillowcases of her own, passed them on to me.

I was suitably appreciative, but since I have lots of these pillowcases, I didn’t go into paroxysms of joy, or even open the package.  When I did, I got a surprise.

Tucked inside a case was a red ribbon from a county fair, and an entry tag.  The embroiderer was not my great-grandmother Grace, it was her sister Gertrude! who had married a Bohemian sheep farmer, moved to Montana, and thereby pretty much fallen out of family awareness. 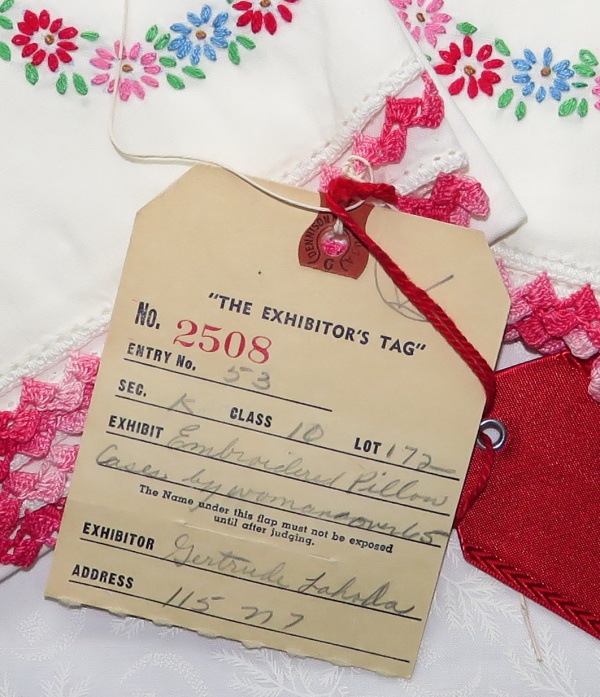 “Embroidered Pillow Cases by woman over 65.” Gertrude was 78 when she made these.

Gertrude was born in 1884, four years ahead of my great-grandmother.  I have her wedding picture, but I don’t know what year it is from.  I also don’t know how she met her husband, whether he was a farmer when she met him, or how early on they planned to move to Montana.

Wedding photo of John and Gertrude Lahoda, circa 1904. Is that not the face of a woman who will make a properly decorated home wherever she goes?

I do know they never had any children, and that she did come back to visit family at least once.  She brought some Montana souvenirs for gifts and a little agate ring that she brought has been passed down to me.

It just makes me so happy to know that she was another person in our family that loved to make pretty things, and made them her whole life long!

← Bright Blocks for Gray Days
What Do Christo, Sally Field, and Carl Icahn Have in Common? →

34 thoughts on “A Hidden Family Treasure!”