Helen of Troy: World-Renowned Weaver – and, I hear, kinda pretty!

I had read sections of the Odyssey and the Iliad back in high school – I liked the Odyssey but remembered the Iliad as a story where nothing happened.  I saw the movie Troy when it came out but wasn’t impressed – it just struck me as a movie where Brad Pitt and Eric Bana talked a lot, and nothing happened.  But obviously this epic would not still be with us if it didn’t have something important to say, so I decided to give it another try.

Fortunately for me, I found Caroline Alexander’s book, The War that Killed Achilles: The True Story of Homer’s Iliad and the Trojan War.   It’s a well-written study of what the Iliad says about war – about military issues such as loyalty, bonds between warriors, the price of honor, but also about the effects of war on non-combatants.  Alexander compares the epic with current events and viewpoints, making its relevance clear.

In case you too have forgotten everything you ever knew about the Iliad, here’s the back story – Paris of Troy has stolen the beautiful Helen away from her Greek husband, Menelaos.  Menelaos has talked his brother Agamemnon and a thousand ships’ worth of warriors to go to Troy to get her back.  The Greeks have besieged Troy fruitlessly for ten years, and that is where we come into the story.  Two warriors on the Greek side, Agamemnon and Achilles, are arguing and Achilles goes off in a temper fit.

While he is off  sulking, the two husbands of Helen plan to have a man-to-man combat to decide her fate and thus, the fate of both armies.

The messenger of the gods, Iris, goes to get Helen to watch this combat – and here’s where I found an interesting little nugget for textile artists:

She [Iris] came on Helen in the chamber: she was weaving a great web,
a double folded cloak of crimson, and working into it the numerous struggles
of Trojans, breakers of horses, and bronze-armoured Achaeans,
struggles that they endured for her sake at the hands of the war god.
Iliad Book 3

This one sentence is just packed with information for me, and raises all kinds of questions.

Let’s start with the basics of Greek weaving. The ancient Greeks wove on vertical looms, that were leaned against a wall.  They were head high or taller, so the weavers had to stand up to weave.

Reconstruction of a neolithic loom By Edal Anton Lefterov (Own work) [CC BY-SA 3.0 (http://creativecommons.org/licenses/by-sa/3.0) or GFDL (http://www.gnu.org/copyleft/fdl.html)%5D, via Wikimedia Commons

The looms would be similar to today’s Navajo looms, but instead of winding the warp threads around a sturdy frame of sticks top and bottom, the Greeks tied small weights to the warp threads to provide tension.  In the weaving world, loose threads are trouble, so this method already seems tricky to me – I can just see the weighted groups swinging and getting tangled around each other.  Then, to make things even more difficult, after placing the weft thread in and out across the warp threads, the weaver beat the weft up, away from her body, to make one finished row.


So the thought of the most beautiful woman in the known world working in this method already changes my opinion of her.  She is not just beautiful, she has skills and she is using them.

But the text shows that she is not just weaving basic cloth.  Weaving on any sort of vertical loom usually results in a simple plain weave, the kind you did in paper-weaving a place mat back in grade school.  The weft goes over one warp, under the next warp, all across the width of the web.  (A “web”, by the way, is just what weavers call the product of all those crossed threads.  It’s not really “cloth” until it has been fulled, usually by washing and agitation.  So Helen is not creating a spider’s web.)  It’s pretty easy to do twill, which has diagonal lines, but even that takes more knowledge and fussing than absolutely necessary to get a wearable cloth.

But here Homer says Helen is weaving “a double-folded cloak of crimson.”  That is essentially weaving two layers of cloth at once, with a join on one side, to make a cloth that is double width.  Or you can weave the two layers with a join on each side and a slit up the middle of the front layer.  It is possible to do that on a vertical loom, but it isn’t easy.  It would definitely require more concentration.

And then this is what really gave me pause.  He adds, “working into it the numerous struggles of Trojans…and…. Achaeans.”  So in addition to weaving double-cloth, she is also working in tapestry pictures?!  In tapestry, you don’t place one weft across the full width of the web, you use many small wefts and work them back and forth in little sections.  Trying to remember where you were in the placement of the colors in each row, as well as remembering where you were in counting the warp threads to weave the double-cloth structure, would be pretty near impossible.  I guess if the loom was propped up straight, she could go around the back of the loom to see what she was weaving on the back layer, but most scholars think the looms were leaned against the wall.  Either way, this would show some extraordinary skill.

It would be the equivalent of us saying, “She was weaving baskets with one hand and shooting hoops with the other”  – two basket-related tasks, but rarely seen together.  So that makes me ask, is this account of Helen’s superior skill intentional?  Is it meant as evidence of her immortal parentage?  Or is it the result of a poet that really doesn’t understand weaving?  If there was an actual person named Homer, and he was actually blind, that might explain a lack of weaving knowledge, so he could have just added in details that sounded impressive.  On the other hand, he put together earlier traditional tales, so are these details from earlier accounts?

Or is it just translation by modern people who don’t understand weaving?  Or is it me?  Were Greeks running around in double-woven tapestry and somehow I’ve missed that?

So far I have just talked about the weave structure Helen was using.  But there is another very important term in the sentence – crimson.  I have read enough about colors in the ancient world to know that “crimson” could mean red or purple – and of course purple was extremely valuable.  It would have been extracted from shells in Tyre or Sidon in Lebanon, which was pretty close to Troy.  But it takes 18,000 of these shells to get about 2 grams of dye, so just a stripe of purple on a garment showed wealth and status.  So is Helen weaving a red cloak?  Or are we meant to understand that a whole double-sized cloak is purple, as an indication of Helen’s great wealth?

So all this background information flashed through my mind as I read this little section.  But I also thought about her subject matter.

If I am stressed or unhappy, like a lot of people I turn to art and craft to lift my mood.  I find comfort in the look and feel of fibers, and as I concentrate on the process, I forget whatever upset me.  But I purposely go to a “happy place.”  I choose innocuous cute subjects like sunflowers or puppies, or just color combinations.  So when I read about Helen weaving pictures of the warriors who were having to suffer due to her, I thought, that would really take strength, to confront those realities. It seems courageous to me, to absorb and represent tragedy while you live through it, especially when you know you are the cause of it. 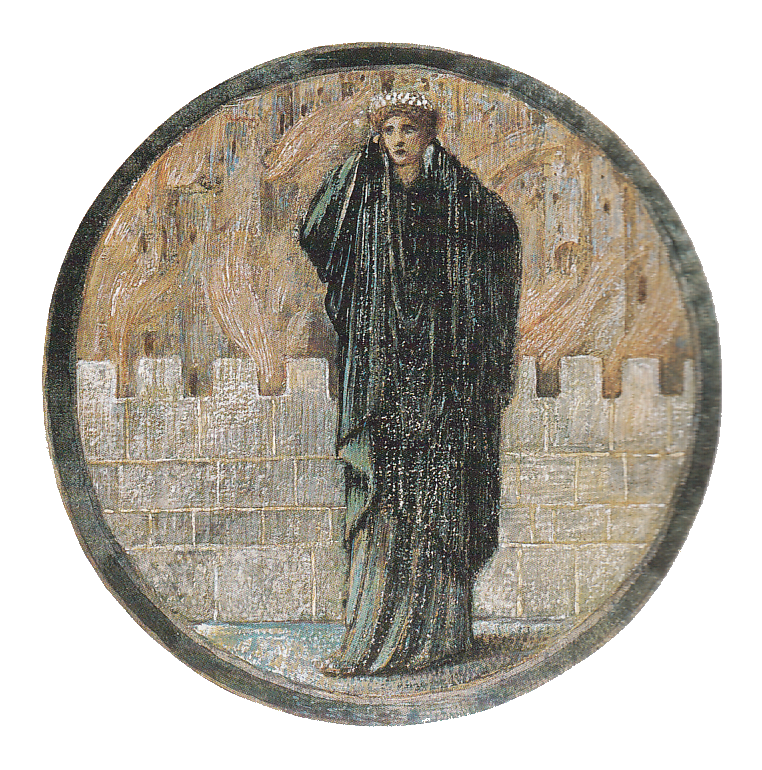 But in The War That Killed Achilles, Alexander sees this is totally differently:

Elsewhere in the Iliad, warriors are said to “weave” speeches and counsels, plot and schemes; by setting certain events in motion, such masculine weaving, then, shapes reality.  The women of Troy weave only the representations of events.  The gentleness of the imagery in this scene – the quiet chamber where Helen sits spinning the story of her own life and the calm delivery of Iris’ shattering news – places the domestic world of Troy and its women at an almost surreal remove from everything that exists on the plain outside… The remoteness of this inner world of spinning and weaving from the rending and tearing that is the work of war is also a symptom of its powerlessness.  At the very moment that Helen sits calmly weaving her own story, she is entirely ignorant of the fact that her story is being changed yet again – her fate rewoven, as it were, by Paris’ off-the-cuff offer and Menelaos’ acceptance.
(Alexander, The War that Killed Achilles: The True Story of Homer’s Iliad and the Trojan War, Viking Books, NY, 2009,  51-52)

Aside from the fact that I really wish people would not use “spinning” and “weaving” as interchangeable terms, I was struck by how differently this author and I viewed Helen’s weaving.  Alexander may be right – I’m sure she knows better than I what Homer intended to communicate with this scene – I just think it’s interesting what insights can arise from familiarity with a topic.

This is already a very long post – so I will save the rest of my musings on Helen’s weaving for tomorrow.  In the meantime here is a link to a beautiful Greek krater, the François vase,  that illustrates stories from around the time of the Trojan war.  There are people in patterned clothing, but they all seem to be wearing the exact same pattern.  The vase from about 200 years later than the Iliad was composed, so I have no idea if these are the kinds of clothes Homer would have had in mind, but they’re different than the usual drapery you associate with the Greeks.  More to research!

← Christmas Cheer
Helen of Troy and the Trojan Cloak →

8 thoughts on “Helen of Troy: World-Renowned Weaver – and, I hear, kinda pretty!”