A few months ago, Turner Classic Movies was running “Films about the Future”, and my husband and I watched “Logan’s Run.”  In case you haven’t seen it, the premise is that everyone is young and beautiful and living in a giant mall – at age 30 they go to a ceremony supposedly to be “renewed.”  (The key word there is “supposedly.”)

What I noticed of course was the costuming.  In so many futuristic movies, the costume designers seem to  believe that in the future we will all be content to wear the exact same thing as everybody else.  In “Logan’s Run,” the citizens wear clothing in either red or green, depending on their age – the boys wear a tunic and pants, the girls wear a pillowcase-shaped garment (very sheer and chiffon-y) in the same colors.

They are all supposed to be young and free-spirited and all that, but you know some of them would have dressed the exact opposite as the mainstream culture told them to.  If they were supposed to look all clean, airy and carefree, some of them would have had to dress in heavy, dark, weighty clothing.  Some others would have cut up and re-seamed their tunics for a patchwork effect, or added metal trim, or written slogans on them, or something.  It’s just human nature to express yourself with your clothing.

Back in the 1970s when “Logan’s Run” was made, I was busy personalizing basic clothing for myself and my friends and family. 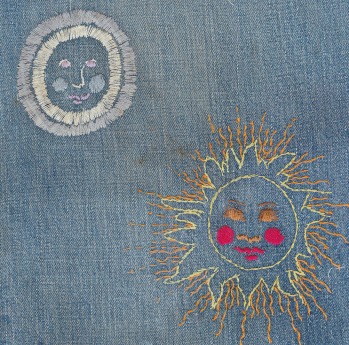 I had so much fun embroidering my blue jeans back in the 70s.  They were bell bottoms, of course!  When straight leg jeans came into style, I got rid of the jeans but cut out this little embroidery first. 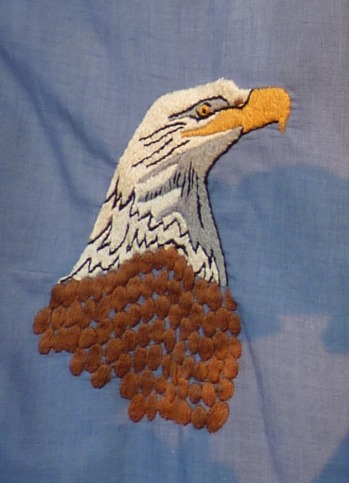 This was a pattern that you ironed on to a work shirt. I made this one for my dad. The shirt doesn’t fit him anymore, but my mom couldn’t bear to get rid of it, so now I have it. If I ever find a Museum of the 70s, I can donate it!

Denim seems to lend itself to self-expression so easily.

My mom did a spectacular job piecing old denim together to make this jacket for my daughter.  It didn’t fit her for long, but I can’t pass it on – there is so much work in it!

For me it would be so interesting to see what people really wear in the future.  The basics have not changed much during my lifetime, although we dress more informally now than we did when I was very young.  Maybe everyone really will be in silver spandex years from now – but whatever the style, I bet it will show up in a million variations.

8 thoughts on “Denim, Chambray, and Self-Expression”