Women Are Here to Stay!

We wrapped up our recent visit to Big Bend with a short stay in Marfa, Texas.  Marfa is famous for its mystery lights, (written about even before cars were invented), for its reputation as an art town, home to the Chinati Foundation, and for El Paisano Hotel, where Elizabeth Taylor and James Dean stayed during the filming of Giant.  I have been to Marfa many times, and the only one of these sights that I have actually seen for myself is the hotel, which I love!  The public spaces in the hotel have changed very little since 1950 – even the lobby piano has never been tuned since then.  People sit and play it and it has a unique sound that I associate with wonderful times. 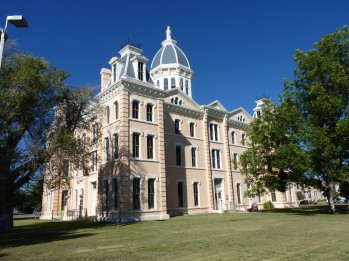 The entrance to El Paisano

El Paisano courtyard.  Ah, I could go for a glass of wine there right now. 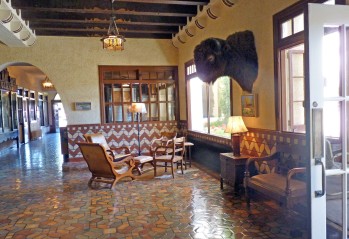 The quintessential Texas hotel lobby.  No, it doesn’t have a longhorn head mount, but I’m pretty sure there’s one around the corner.

One of my favorite things to do in any small town is to go to the library, and see what is available for sale on their donated and discarded book shelf.  In Marfa we hit the jackpot!  The library had a whole shed full of books for sale!  We only had 45 minutes to browse before they closed, but we each managed to choose enough books to fill a box in that short amount of time.

Here are some of the ones I got:

Some of these I bought just for their great old covers, some for the content.  The book Design Through Discovery is from 1977 and actually has a whole chapter on textile design!  The current design books I have don’t even have a whole paragraph on textiles.

And here is my absolute favorite – from 1949, Women Are Here to Stay: The Durable Sex in its Infinite Variety Through Half a Century of American Life.  Its “assembler” (not “author”) was Agnes Rogers, a “picture-book-making genius.”  The book flaps announce that this is “A big book of pictures and commentary for people who enjoy, or are puzzled by, or are women.”  It is “roughly chronological, (but not troublesomely so)”. 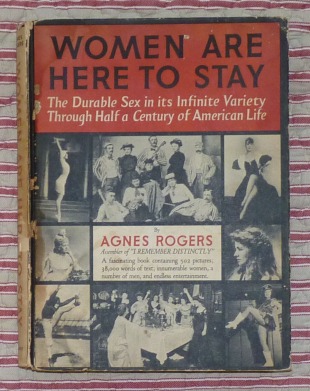 Isn’t this a great cover?

It is a fascinating book, starting off with the “Sheltered Lady” of the late 1800s – describing events in elevated social circles, such as the Vanderbilts’s housewarming ball in 1883, with a total cost of $250,000!  But it quickly moves to the realities of life in that era for immigrants and sweat shop workers.  There are pictures from the 1911 Triangle Shirtwaist fire, in which 145 girls were killed.  The book covers all sorts of aspects of social history, from sports to reforms to occupations.

Some of the attitudes in the book seem incredible today – “Delia Akeley was a co-worker with her husband, Carl E. Akeley… and assisted him in the construction of his famous habitat groups of animals.  Obviously the elephant must be killed before he can be mounted, and here is Mrs. Akeley perched upon the first one that she killed.”  The first one???  She killed more???

Also Rogers’ attitude toward smoking is very different than today’s – “The very idea of women smoking was termed a ‘horror and a crying shame’ in 1898…The moral turpitude formerly associated with the use of tobacco is hard for young people of today to realize; equally hard to comprehend is the strong prejudice that once existed against men smoking in the presence of women.”  It’s like she was saying that women should smoke to prove they were equal to men.

As the book comments on different aspects of American life, some of the complaints are still common today.  With a picture of a six-year-old pageant winner is a comment: “There is a large section of the American public that takes what seems to those outside it a perverted delight in seeing children copying certain music-hall antics of their elders.  The six-year-old torch singer, drum majorette, and adagio dancer are curious products of this aberration, not to mention baby parades.”  I would like to know what an adagio dancer is, but there is still plenty of controversy over activities for children and pushing maturity onto them before they’re ready.

Here are two of my favorite pictures from the book. 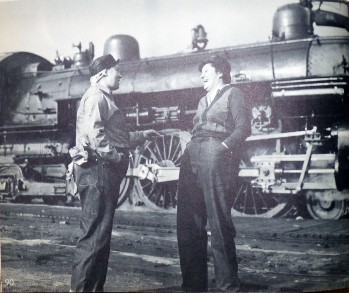 Two women working as railroad employees during WWII. These look like capable, happy women that would be fun to know. 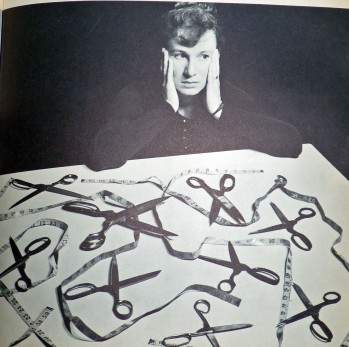 This is Elizabeth Hawes, who had a fashion establishment in New York in 1928. I just like the odd abstract arrangement of the scissors and tapes.

When you think about the amount of change people faced from 1900 to 1950, it is mind-boggling.  We have had lots of change in our own time, but I think we are better prepared to accept constant and rapid change.  I love this book and its look at how women caused and adapted to social changes in their time.

9 thoughts on “Women Are Here to Stay!”