When we left the fascinating archaeology of Crete a few posts ago, it was about 1450 BC. From the evidence we have it seems the rulers in the palace of Knossos were big consumers of textiles, using them for exchange and religious offerings. Unfortunately we can’t read that language yet, so there is a lot about Minoan textiles that is still unknown.

At some point, Mycenaeans from the Greek mainland took over on Crete.

On the map below you can find Mycenae in Achaea, the section west of Athens, and Knossos to the south.  You may remember that in The Iliad, Agamemnon and Menelaus came from Mycenae. 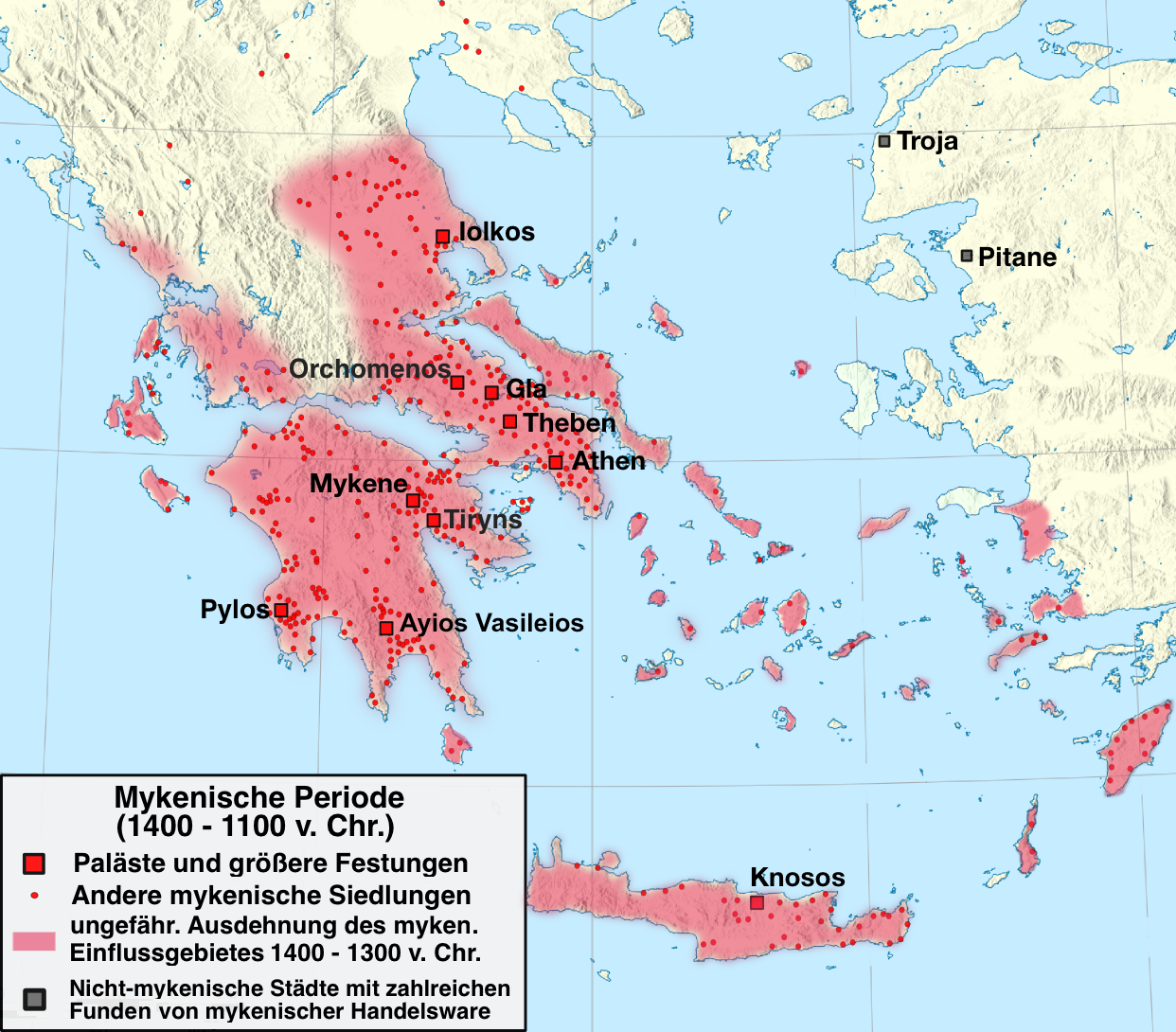 By Own work [GFDL or CC BY-SA 3.0], via Wikimedia Commons

No one knows exactly how, when, or why the Mycenaeans were able to come into power, or why, about 250 years later, their culture collapsed.

What we do know is that at the end of their civilization, Knossos went through another destruction, sometime around 1200 BC*, preserving more clay tablets for us.  And since the Mycenaeans had adapted the Minoan writing system (what we call Linear A) for use with their own Greek language (Linear B), we can read them.

There are whole segments of society that are not mentioned in these tablets – there is very little about weapons, or ships, or pottery.  But fortunately for me, there are thousands of records having to do with textiles!

If you try to picture what Bronze Age cloth production was like, you might imagine young people guarding the family flock of sheep and goats, chasing butterflies as they gently “wool-gathered” the locks of fleece that the animals lost on thorny bushes, and bringing the wool home to mother for her to spin and weave into cloth for snow white tunics at her leisure.  At least that’s how I pictured it.

But as we saw with the Minoans, rulers require a lot of cloth for their consumption.  And it looks like, when the Mycenaeans took over Minoan culture, they liked the system they saw in place, and tweaked it for greater efficiency, managing every step to “acquire raw material (wool) for transformation into value-added finished products for redistribution and exchange.”  (The Cambridge Companion to the Aegean Bronze Age, p. 305)

They kept records of every step in the process, from gathering the flocks to adding garment fringes.

There are 800+ sheep census forms from 30 places around Crete, and they all go something like this:

Shearing or plucking record for the same flock

From the collection of tablets we have, we can see that the Mycenaeans were controlling about 100,000 sheep, probably using 1/4 to 1/3 of the available grazing land.  Even today Crete supports about 530,000 sheep, so the Mycenaean number, although large, is realistic.  The scribes were just keeping internal records.  They had no reason to think their work would be preserved or even seen by anybody outside the kingdom, so they had no reason to try to exaggerate the king’s power or control.

I like the idea of the “wool unit” equaling the output of four sheep.  I can imagine how this came about:

Tribute Collector:  Shepherd Ti-mi-za, if my memory serves me correctly, the amount of wool you are contributing is less than it was last year.

Shepherd:  My sheep have been sick, it was a hot summer… half of them just didn’t put on wool like they did last year.  They might have a mineral deficiency.

Collector:  Fine, from now on, instead of collecting one fleece from each sheep, we will require a certain weight of wool, and it’s up to you how to combine fleeces to make your quota.  But you will make your quota.  Am I clear?

Other shepherds murmuring:  Oh great, thanks Ti-mi-za, for your little idea.  I told you you’d never get away with short-changing the tribute collectors, but you said, “No, what do they know about actual fleece weights?  A handful here, a handful there, who’s to know?  They’ll be too tired from traveling all over the kingdom, lugging their little clay tablets!  If we all do it, they’ll never notice!”

We even know what the wool unit was – it was equivalent to about 3 kilograms, which means 750 grams of wool per sheep.  And that means that the palace controlled 30 – 50 tons of wool each year (as Killen says, depending on whether the “owed” amounts were ever actually collected).

Once the wool was collected, it must have been spun somewhere, but I did not find a lot of information on that step. (Although one theorist thinks that an undeciphered Linear B tablet means that wool baskets were delivered to a certain work group.)

The records next show us the wool being distributed to weavers, “with the expectation that set production targets would be met with finished textiles delivered back to the palace.” (Burke, Location 1533)  And it wasn’t just like, “Here’s your wool, it’ll be interesting to see what you make.”  The type of cloth and number of finished units was specified.

There are at least 11 Linear B symbols that we know have to do with cloth.  The three below are pretty well understood and tell us a lot about cloth specifications.

Linear B cloth signs, based on From Minos to Midas by Brendan Burke

Here are descriptions of those three cloths, summarized from From Minos to Midas by Brendan Burke:

TELA-PA used five wool units to three cloth units, and the term is often linked with red or purple.  One tablet refers to 453 pieces.   Burke credits textile historian Elizabeth Barber’s idea “that this was a thick cloth with three closed edges that could be used as a cloak, a blanket, or a woman’s peplos.”

The sign TELA-PU refers to a thick, folded cloth, where one wool unit equaled one cloth unit.  It is described as red, purple, or patterned, so the thought is that this was meant to be outerwear, and was possibly a loin cloth or kilt.  Two tablets refer to a total of 980 of these units.

TELA-TE used seven wool units for one cloth unit, which would make the finished object weigh 21 kilograms, or 46 pounds!  Burke says it was nearly four times as heavy as the pa-we-a cloth, probably a heavy-duty cloak or rug, maybe bedding or tapestry.  Possibly these last two types of cloth were felted.

So even though we don’t know each and every specialty item, we see that there was a system of specifications. (I’m not convinced we have figured them out properly. The weaver in me wants to know why the historians keep assuming that the more wool went into a cloth, the thicker it got, instead of longer and/or wider.  The heaviest garment I own is a vintage wool coat, and it only weighs four pounds.  What loin cloth would weigh six pounds? Couldn’t one cloth unit be made into several garments?)

The tablets also show a surprising amount of specialization in textile jobs.  Workers were not generalists.  Every time a product was picked up from one group and delivered to another, there was a record, for the quantity of material left and what was expected to be made from it.  There are terms for wool pluckers, wool combers, linen workers, spinning women, men and women weavers, headband makers, and fullers.  There were people whose entire job was adding white “fingernail” decorations to finished cloth.

There are also records of the rations workers were given after meeting their targets.  These workers probably didn’t live in Knossos itself, but were dependent on the palace system.  Some of the weaver groups are described by the place they were from (“women workers of Siteia,” for example) – they may have been slaves or prisoners of war, or descendents of the same.  Possibly 1000 workers were in this system.

And what was done with all this cloth?  That has been a huge bone of contention among archaeologists and historians. It used to be thought that it was collected into storehouses, and then redistributed to the whole population.  Now the thinking seems to be that it was used more for the rulers’ purposes – to clothe their slaves and soldiers, provide tents and sails, make exchange gifts with other rulers, dress themselves in finery, and make offerings to the gods.  Burke writes, “I believe most of the exchanges were on a community-to-community level rather than on an individual merchant-to-merchant level…The palace directs consumption of the finished product for military, ideological and political purposes, and to acquire other prestige goods which serve to maintain power.”  (Burke, Location 350 of 5490)

Reading about this textile system has really opened my eyes to the complexity of life in ancient times. I am just amazed that the concepts of targets and quotas (and detailed record-keeping!) were around at such an early time, and that textiles were made in such numbers.

When the Mycenaean civilization fell, the system disappeared.  (I can’t help wondering what happened to the weaving slaves who were used to being told what to do and where to pick up their rations.)  Even writing disappeared, for hundreds of years.

“Indeed, once the palaces were destroyed, this specialist activity clearly ceased, and virtually all the terms which are listed above pass out of use in the Greek language.  It is not until a millennium later, in the great conurbations of the Hellenistic and Roman periods like Alexandria, that we again find anything like the degree of specialisation in textile production that we find on the tablets, in that case sustained by a market economy.”  (John T. Killen in Ancient Textiles: Production, Craft, and Society, Location 1752)

So these are the three books I have read and reread many times, to try to get a handle on all this information.  I think it’s a fascinating era, but I think I am going to take a break from history for the rest of this year, and go back to creating some textiles of my own.