I enjoyed the structure of a weekly photo post when I did the 1 Day 1 World Project, so I thought I’d keep that going on my own, with just whatever strikes my fancy each week.

(Warning: some creepy crawly creatures ahead.  Just take a deep breath and don’t miss out on the beauty in their colors, patterns, and textures.)

This week we had a cool spell that had some birds migrating through, and some reptiles moving slow enough for me to get great pictures.  A pair of Eastern hognose snakes came out and sunned in a corner of our garden, for four days in a row.  If hognoses are cornered, they can be very dramatic, first puffing up like cobras, and if that doesn’t work, playing dead.  I can’t bring myself to mess with animals for my own amusement, so I didn’t try anything to provoke a reaction.  Instead I just enjoyed watching them as I came and went in the garden.

And I was surprised to find a Mediterranean house gecko in our wood pile – as you can tell by the name, they are not native, but they are not known to be harmful as some invasive species are.  When I lived in Sugar Land, we had these geckos all over the place, but there they were a translucent white, which I guess is much better camouflage on the white siding of subdivision houses.  I would love to know if the ones up here in the woods are more likely to be dark, like the one I found.

I noticed some crumpled leaves gathered into a ball on a goat weed — when I checked it out, I found a beautiful green lynx spider guarding a web full of her babies there.  She was the perfect color to blend in with parts of the plant.

There was another insect that I noticed only because it was stationary on a man-made surface. If it had been on a tree, I would never have seen it.  I’m not sure, but I think it was a lunate zale moth – they come in a spectacular range of variations.

I also discovered two persimmon trees I didn’t know I had, and I learned a lot about them at Grackle & Sun.  I am going to try mordanting and natural dyeing with these. 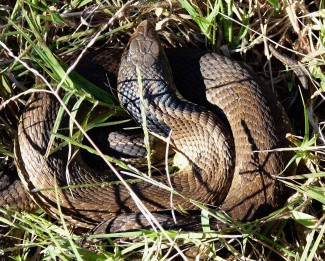 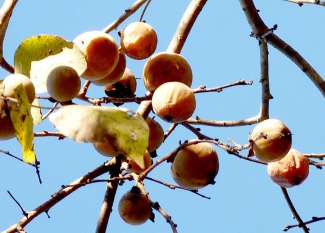 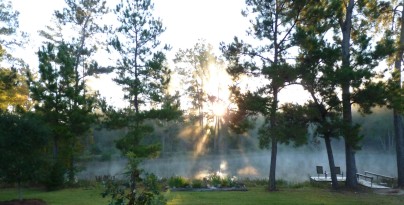 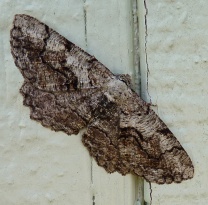 I believe this is a lunate zale moth. 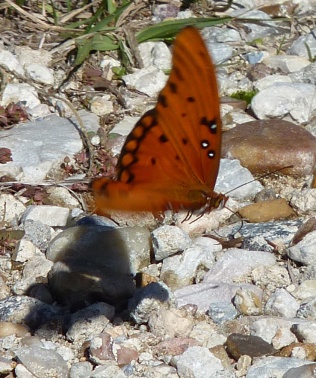 I love the shadow under this Gulf fritillary. 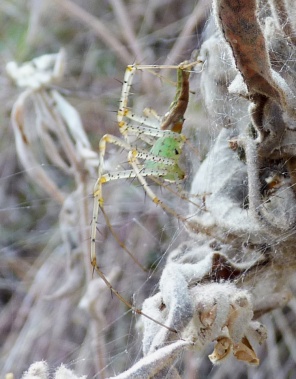 Green lynx spider on goatweed. If you look closely, you can see some of the baby spiders too. 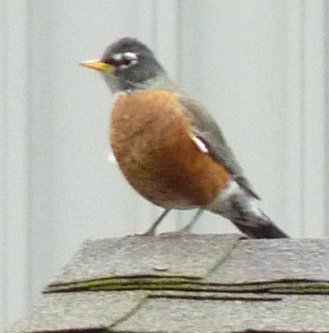 We only see robins during fall and spring migration. 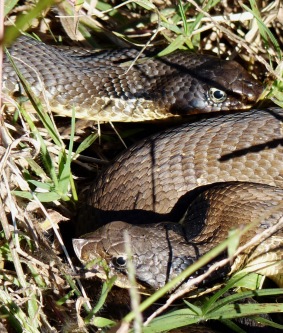 We saw these two Eastern hognose snakes in a corner of the garden, several days in a row.

This is a Mediterranean house gecko. They were first recorded in Florida in 1915, and have spread.

We don’t usually get dramatic fall color in Texas, but these subtle colors are beautiful in their own way.

11 thoughts on “Subtle Colors of Autumn”