For weeks I have been trying to figure out how to take my own fabric swatches and digitally blend them with specific shapes, to use in art quilts.  Even though I have a lot of photo editing books, my problem was that the books are organized by term, to explain what each program feature does, but I had no idea what term I was looking for.

Finally, after going through practically every option in every tool bar, I figured it out. After seeing the plethora of effects you can get, you might want to try it too!

I use Adobe® Photoshop® Elements 12 software.  Fortunately Adobe allows use of screenshots of their programs for educational purposes on websites*, so I can show you the process.  (However, they do not allow cropping or otherwise adjusting screenshots, so the thumbnails will be hard to see here.) If you use another photo editing program, I hope these steps will be helpful there too.

A practice piece that combines Grandma’s cream pitcher with some handwoven fabric, and photo editing magic.  From here I could print it on fabric, and then use it in an art quilt.

Prerequisites for this technique – a basic knowledge of how to select parts of an image, and how to create layers.

Step One:  Take a photo of your object against a simple but highly contrasting background.  It doesn’t matter what color it is, because you can change that later.  Upload to your computer, straighten, crop, and otherwise get the image to your liking. 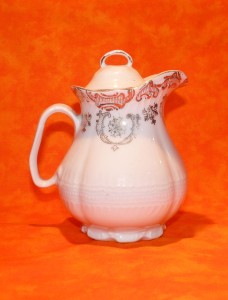 I will refer to the pitcher as the object, and the orange fabric as the background.

The original photo is on the left. I never work with the original, I always copy it to a new transparent base layer.

All Adobe product screenshots reprinted with permission from Adobe Systems Incorporated.  See terms of use link at the bottom of this post.

I like to set up my working layout in columns (the layout button is on the bottom left tool bar).  Whichever picture I am working on will show that it is active by a white highlighted file tab, and on the right, its layer thumbnails will be visible.

Step Three:  Close the original photo.  Now we are going to separate the object from the background, while keeping both available to use as we wish. It is like cutting a paper doll away from its background, while keeping both parts intact and useable, but since we are going to do it with pixels, it’s going to take a little more work.  The benefit is that once it’s done, we can use it over and over.

Use the magic wand tool to select the background. I have zoomed in on my image so you can see the white dashed line that shows the border between the selected object and its background.

The magic wand tool selects the orange background and separates it from the white pitcher.

Step Four: From the Layer menu in the top tool bar, choose Layer/New Layer via Cut.

This will give you one layer with the object, and one with the background and an object-shaped hole cut out of it.  When you look at the image in the main screen, you won’t notice any difference, but the thumbnails show what is on each layer.  The positive shape and the negative space are separated and are each on their own layer.  In the screenshots below, I clicked on the little eyeball icon in each layer’s thumbnail one at a time, to make that layer invisible, and show you the image separation.

The background layer once the object has been cut out.  Both of these screenshots are from the same step.

When I make the background layer invisible, we see the object by itself on a transparent ground.

Step Five:  Now open the photo you want to use to combine with your shape.  I am using one of my handwoven samples here, but I could use a photo of a sunset, or a flower — you get the idea.  I would only ever use my own work, though.

The fabric I am going to use to fill the shape is on the left.

And here is the real magic, the shortcut that took me weeks to figure out!

Select the layer with the object in it; not the transparent layer and not the background – you can see a blue bar selecting it in  the layers menu on the far right.  (I have made the background layer invisible so this shows up better, but you don’t have to.)

From the top tool bar, choose Layer/New Layer.  A dialog box will open, and check the little box in the middle with the phrase, “Use Previous Layer to Create Clipping Mask.” 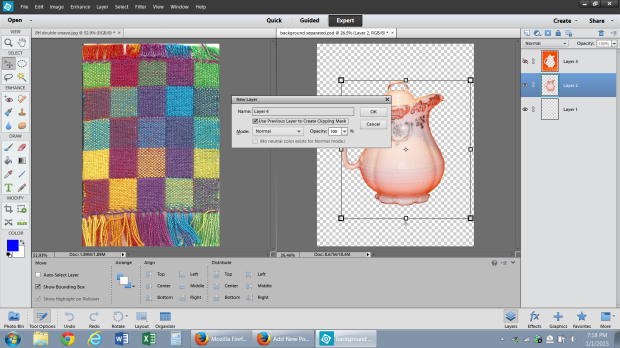 A swatch of double-woven fabric is on the left.  To apply it to the pitcher shape, I checked the box to create a clipping mask.

A new blank layer will open above the object layer, but indented to the right.  Copy and paste your filler photo into that new blank layer.  You may have to move it and/or expand it, but IT WILL FIT THE SELECTED SPACE PERFECTLY!!!!

I used the move tool to adjust the fabric expand to the pitcher shape.

(This was very counter-intuitive to me, because in every other process I have ever done in Photoshop, I have worked from the top down.  Usually, the topmost layer blocks the visibility of the images on the layers below. So in adding the fabric swatch image to a top layer, I would expect it to hide the pitcher outline, and if I just added a new layer in the regular way, that is what would happen.  But the check box switches it to an alternative function.  The upper layer becomes a sort of subordinate layer, and the lower layer controls where it is visible.  If it was up to me, instead of calling it “Clipping Mask from the Previous Layer,” I would title it something like, “Upper Layer Drips into Lower Layer.”)

For just a flat cutout look, you could stop here.  Choose Layers/ Merge Downward to link the clipped layer (what I think of as the fill) down onto the object layer.  Then the new surface and the shape will bond together as one, and you can move them, resize them, etc.

But before that step, I like to play with all the filters and see what effects I can get.  To make the featured image at the start of this post, I applied a stained glass filter to the layer of the double-woven fabric.  For richer color, I used the “multiply” adjustment layer, and then duplicated that whole layer.  You can see the two identical thumbnails on the right hand side below.

I reduced the opacity on those colorful layers to about 75%, so the white pitcher is still visible underneath.  Its highlights and shadows show through somewhat and make the new creation look more three-dimensional.

When I am happy with my choices, I merge the layers.  Then the effects will stay with the pitcher shape — I can copy it and use it on another background, or resize it.

The stained glass filter makes the double-woven fabric unrecognizable.  I made the background layer invisible so I could concentrate on the pitcher’s appearance.

I like to use the background that was in the original photograph, because the shadows match up and add to the 3-D effect, but I change the color to complement my new object, using the Enhance/Adjust Color tool.

The slider adjusts your existing color, it doesn’t match the color in the display bar. 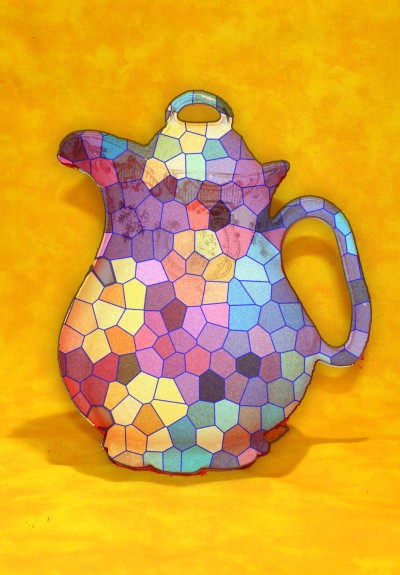 The edge on this one is not great, but at this point, it’s only a twinkle in my laptop’s eye!

So much whimsy, so early in the year. 🙂

I always have more ideas than I have time and materials to actually make.  For me, digital collage is a fun way to play with a lot of ideas in a short amount of time.  Now that I have figured out the process, I think I’ll be doing more with it this year.

← A Cloud of Witnesses
Shadows of the Past →

24 thoughts on “Digital Collage with Fabric”