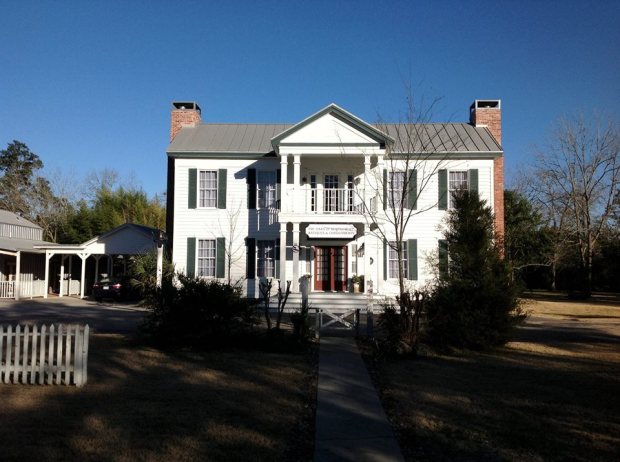 The Oaks of Montgomery antique store

This is wonderful antique shop that I visited a few weeks ago, the same one where I bought the flour sack quilt.

On that same visit, I walked into a large, airy room that was filled with antique clothing.  I had been in this room about 15 years before, on a historic house tour, and I had a vague memory of the then owner of the house being in costume, greeting us in this room, and talking about the clothing of the past.

I realized that many of the dresses and hats in the room were replicas, but about half were the real thing.  They were for display only, but the kind owner gave me permission to take as many photographs as I wanted, and use them for this blog.  The most fabulous gown was hanging in an open wardrobe, and he even allowed me to move it so that I could get good pictures.  And now I can share it with you!

Black sequined gown.  Collection of The Oaks of Montgomery Antiques and Consignments

Detail of the collar, and intricate beadwork on the bodice.

My guess is that this dress is from 1900 – 1905.  I am basing that on the relatively narrow skirt, and the sleeves that are reduced in size from the giant leg-o’-mutton sleeves that were in style from 1894 – 1896.  However, if you can date it with more precision, I would be happy to hear from you! 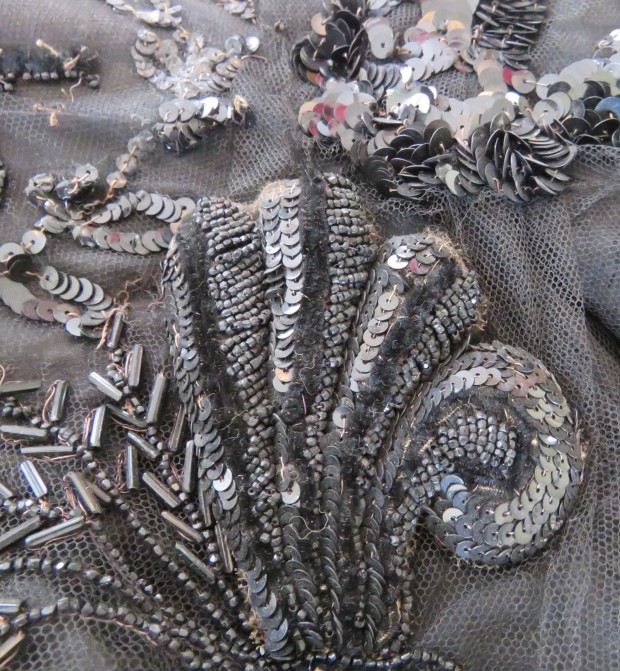 Close-up of the embellishment.

I was happily shooting away, getting pictures to show the construction, when my husband asked what sequins were made of.  I thought that modern ones are made of some sort of plastic, but I had no idea what earlier ones were made of!

So that started me on a hunt.  The most interesting article about sequin history is here at Fanzine (although the constant use of sentence fragments wears thin after a few paragraphs.  It’s like Sam Spade is narrating textile history).  The part that sticks with me, is that during the early 1800s, Napoleon tried to sustain his soldiers on pure gelatin, unsuccessfully.  French inventors then found other uses for gelatin, including rolling it into sheets, punching and electroplating to make shiny spangles.  The sequins took dye well, but they also melt in the heat, so not many of them have survived.  (I would think, especially not here in Texas.)

That article made it sound like the gelatin sequins were first produced in the early 1800s, but this article from the Smithsonian says the process started in the 1930s (and that is also where I found the link to the Fanzine article).  It also links to this site about the 2009 recreation of a sequined jacket of the 1600s! at Plimoth Plantation.  I was hoping to find details about sequin production in the centuries between King Tut’s gold and the gelatin sequins, some time that would bring me closer to understanding the embellishment on this dress.  The Plimoth historians mention that their recreated jacket used more than 10,000 gilded spangles, and that they brought back production methods unused for hundreds of years, but the blog that detailed their process has apparently been taken down, so no more details available there.  😦

Detail, showing the chain stitching that holds the sequins to the netting.

Here’s what 1964 Textile Fabrics and Their Selection* has to say:

Nearly all the laces classified as “real laces” can be duplicated by machine with slight variations and simplifications.  Machinery for making looped net was invented about 1764.  But the forerunner of the present lace machine, the bobbinet machine, was patented by John Heathcote in the early 1800’s and was later modified…

Bobbinet, which comes in wide lengths like dress goods, is often imported from France…Bobbinet is sold by the hole count… The greater the hole count, the finer the quality.  When stiffened, [it] is used for veiling, evening gowns, and dress lining.

Tulle.  This is similar to bobbinet but is made in silk, rayon, or nylon and has a higher hole count.  Tulle is stiffened.

Tulle was first made in Nottingham, England, in 1768, and its mechanized construction was perfected and patented by John Heathcoat in 1809.  After his Loughborough factory was attacked by Luddites in 1816, he removed to Tiverton, Devon, and also established a steam-powered factory in Tulle, France — a location that gave its name to this net.  (p. 169)

I find it really amazing that machines for making lace were in use so long ago! 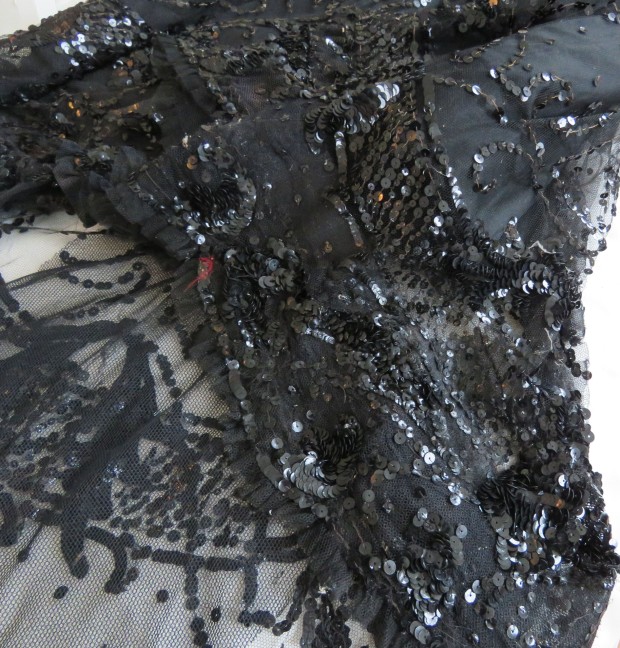 Detail of the layers of cloth and embellishment at the hemline.

The gown being held up in the light (only for a moment!) by my patient husband.

I felt very honored to have some time with this beautiful survivor. The kindness of the store owner gave me a wonderful afternoon!

← Too Many Lambs
Lovely to Look at: Difficult to Summarize →

12 thoughts on “Generosity and Splendor”