Some of you rightly guessed that the mystery magazine was from the late 1940s — and Mary from Zippy Quilts got it exactly, with her guess of 1947.

“You Can Enjoy Ironing” article. Although it really doesn’t look like she is.

(Tara Sparling claims she wrote this ironing article in 2015.  She writes a lot of funny stuff and I have read it all but there wasn’t any ironing.  Now Kerry and I do enjoy ironing, much more than the lady above, and we have both written about it, Kerry about eight times.  Me just once.)

So why have I been reading magazines from 1947?

I happened to pick up two books about fashion advice in the first part of the 20th century.  The one which I have already referred to is The Lost Art of Dress: The Women Who Once Made America Stylish by Linda Przybyszewski, and the other is A Perfect Fit: Clothes, Character, and the Promise of America by Jenna Weissman Joselit.

Przybyszewski focuses on women such as Mary Brooks Picken and other “Dress Doctors” who wrote hundreds of books and pamphlets to teach American women how to dress appropriately and thriftily at any age, and for any occasion.  They “took traditional ideas about beauty and art and used them to help American women to flourish in the twentieth century, an era they viewed as one of unprecedented opportunity for their sex….  Gently but firmly, the Dress Doctors urged all American women to wear clothes that let them work efficiently and that brought the elevating power of beauty into their lives… The Dress Doctors also advised what suited a woman at different ages…They explained how a woman can age with grace and dignity by using the right hues and fabrics.”  (The Lost Art of Dress, introduction)

A Perfect Fit focuses more on the targets of this advice.   Pastors, rabbis, and social workers warned their audiences,especially minority and immigrant women, to avoid extremes, such as bright colors, flashy jewelry, or gigantic hats..  “The stuff of countless sermons and editorials as well as dreams, clothing loomed large on the national agenda in the years between 1890 and 1930, a period during which the institutions of modern America — the ballot box and the blaze of electricity, the metropolis and the melting pot — came into their own….the custodians of American values had much to say about the style, cut and color of everyday attire.  What one wore, they claimed, transforming personal appearance into a civic virtue, was no private affair, subject to fancy or the whim of a moment.  What one wore was a public construct, bound up with an enduring moral order… Fashion was not simply about looking good.  Fashion was about being good as well. ” (A Perfect Fit, introduction)

After reading these two books, I wanted to look for supporting or conflicting evidence in the publications I have collected.  I had two magazines from 1947, a McCalls and Ladies Home Journal, and while they were full of the usual Spam recipes  and sprightly homemakers —

— and ads for products that have disappeared —

A special ironing device for shirts, for less than $100!

I also received a few surprises.  For example, the Ladies Home Journal had a 2-page spread directed at 16 year-olds:

This is it!  This is your summer… you are longer, slimmer, lovelier; there’s a young man called Bob, Bill, or Peter on you mind, and a very sixteenish-looking wardrobe will make things perfect.  Whether you visit friends or stay put in your own back yard, you’ll want to look your best, and your best is — sixteen.  Make the most of this summer in which you’re young enough to play pranks but old enough to be romantic, young enough to run to mother but old enough to travel alone.  Dress up to these privileges in the clothes designed for you — only you! And – get snapped every time you make a move, for the record or the sentiment.

I would have never thought that there would be such youth-oriented articles in the 1940s. 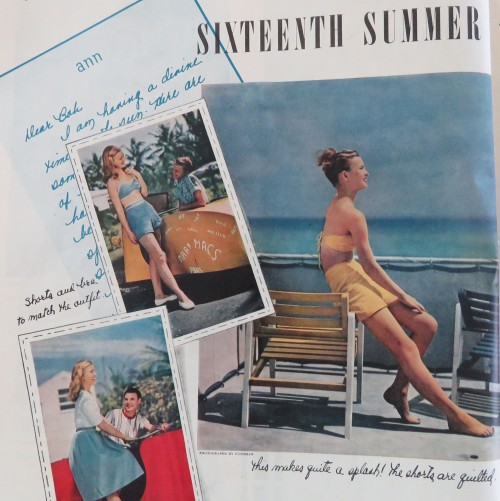 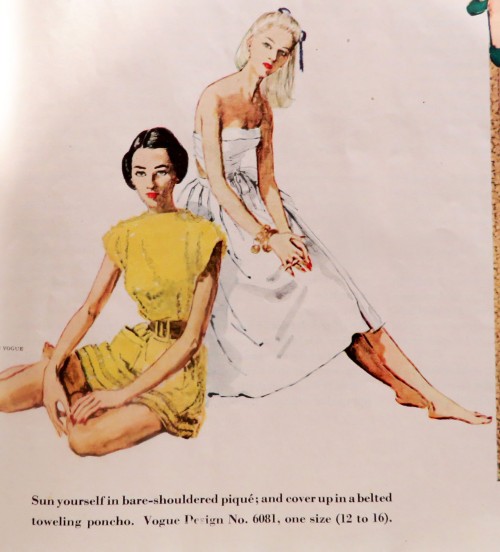 Another illustration from the same issue. These girls look like they might be 17, and realizing that according to the previous article, they are already past their prime.

The thing that surprised me most about these magazines was their editorial content.  Between the ads for hair brushes and baby food are long, thoughtful articles, such as: “Peace and Another War: the Second World War need not have happened, and a Third World War need not, and may not, happen”, “Self-Confidence,” and “The Unwed Mother: On shoulders too small to carry it rests the burden of the unwed mother’s dilemma,” (which advocated plain birth certificates with no label of “illegitimate” attached).

The opening editorial in McCalls was extremely harsh:

You Are Losing Ground

The American woman is, by and large, the most complacent on earth.

She would not trade places with any woman in the world.

Indeed, she is apt to look on others of her sex as several cuts below her…Czechoslovakian women she still largely associates with the picturesque, but hamstringing, multiple petticoat.  Cuban women, along with others of Latin America, she is sure are just beginning to descend from the balcony.

But take a look at the streamlined, chromium-plated, much-touted American woman.  She now sits in Congress all of seven strong — or about 1 percent of membership.  This is one half of the poorest showing in the countries named, countries where women are by no means ultraprogressive…

Lawmakers are big shots — perhaps, in a country like ours, the biggest.  For law is the composite of the will of the people — and people are supposed to be running things.  yet where is the highly press-agented amalgam of beauty and brains, the American wonder, the all-in-one?  She composes slightly more than half the population of the United States and certainly holds her own in the movie palaces, cocktail lounges and at the race tracks.  But in Congress she is, proportionately, about 97 percent missing.

Our lady of the ‘home of the brave’ may be a tiger at the nylon sale, a lion over the bridge table, but she is a mouse where it matters.

And it goes on like that for three pages.  The author was an Alice Fraser but I have not been able to find out anything about her. I would never have guessed that any magazine would have taken such a berating tone toward its readers.

So, I was surprised that already in 1947 we had the product predictions, the permissiveness toward youth, and the weighty political articles that I associate with later decades. Those of you who were guessed the era – did those things surprise you too?  Or did you already know about them?

I did find stylish evidence of the Dress Doctors’ principles too, but I will save that for another post.

← Guess the Year
Design Advice from the Dress Doctors →