In the closing days of WWII in France, couturiers in Paris created an exhibit which would both “show the continuing vitality of the fashion industries” and raise money for war relief.  After the deprivations and horrors of war, fashion workers were eager to bring visual beauty back into daily life and to resume their place as the heart of the fashion world.

Paris had been liberated in summer of 1944, but with raw materials scarce and transportation severely disrupted, there was no way to resume producing fashion collections as they had been done pre-war.  After discussion, the members of the  Chambre Syndicale de la Haute Couture Parisienne decided to resurrect a tradition which went back to the Middle Ages — traveling fashion dolls, which could display new styles in miniature.  They wanted prominent artists to be involved too, and Robert Ricci had the idea of giving the artists free rein to create theatre sets (décors) for the dolls, naming the exhibit Théâtre de la Mode.

To reflect the changing times (and probably also in response to the lack of materials), the dolls themselves were made from wire, just a suggestion of a body, like a rough sketch, to support the fashions.  A refugee Catalan sculptor made their plaster heads but specified that they not have make-up, so they would be seen as small sculptures.

Couturiers signed on for the challenge, enlisting the help of furriers, jewelers, hairdressers, and milliners.  The creative teams worked through a terrible winter of extreme cold, with almost no coal for fires, and electricity on just a few hours a day.

Plagued by inadequate heating, electricity cuts, barely adequate food rations, and often obliged to get to work on foot or on bicycles, the skilled tailors and seamstresses in the workrooms of the couturiers and milliners nevertheless threw themselves into the project with enthusiasm and fervor.  At first, the figurines were only to be dressed, hatted, and coiffed.  ‘But then later there was a kind of rivalry between the couture houses and they said, “Why not have shoes?”  So then little shoes were made.   “Why not have bags?” “Why not have umbrellas?”  A few workrooms even made underwear.  It would never be seen, but it amused them.  You have no idea of the competition between couturiers.  Each one tried to find out what the other was doing in order to do more and better.’

The couturiers could choose what type of outfit to make, and displayed both day and evening wear.  Everything was correct down to the last detail, with tiny buckles, infinitesimal embroideries, hand-covered buttons going through hand-stitched buttonholes, and real gold jewelry.

The planned exhibition was meant to make money for French relief funds.  Over 200 dolls were created.  Each couturier not only created the doll for free, but contributed an entrance fee.  Programs were printed for cost, and the exhibition was held in donated  space.  All the revenue from ticket sales went to the relief agency L’Entraide Française, and the couturiers also dressed cloth dolls to sell for additional funds. 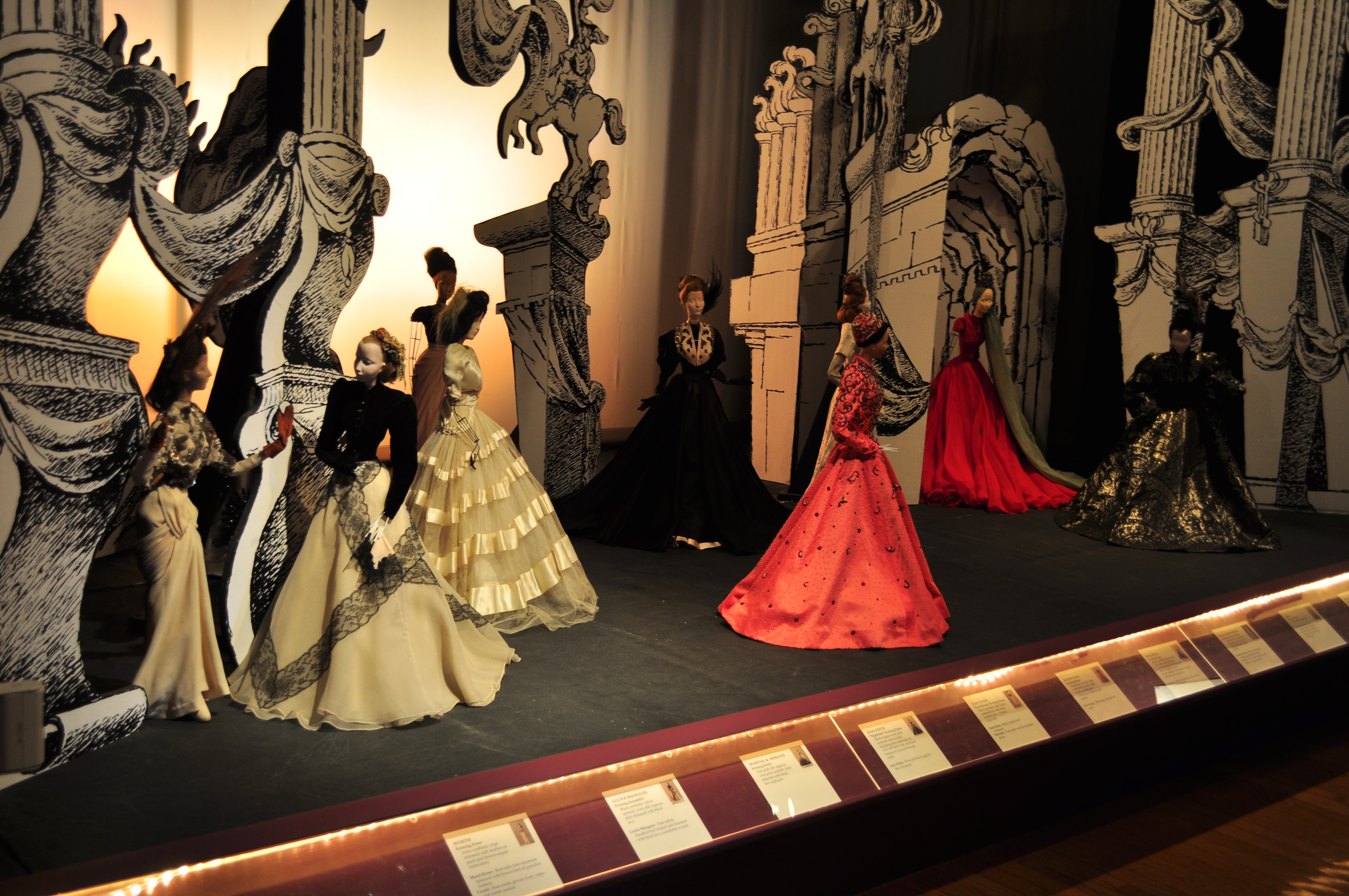 The exhibition was extremely successful, with 100,000 people coming to view, and 1 million francs raised.  The whole exhibit was packed up and then displayed in London, Leeds, Barcelona, Copenhagen, Stockholm, and Vienna.  In 1946, it was updated with current fashions, and sent to the Whitelaw Reid mansion in New York, where it ran for two months.  Tickets were $20!

Its last stop was in San Francisco, at the de Young Museum.   After it closed, the dolls were stored in the basement of the department store City of France.  The store’s president, Paul Verdier, felt strongly that the dolls should be preserved, and proposed to send them at his own expense, to the Maryhill Museum in Washington State, and the directors of the Chambre Syndicale agreed.  Starting in 1952, about 160 of the dolls were exhibited there in glass cases.

In 1988, the dolls were sent back to Paris for restoration and an exhibit at the Musée des Arts de la Mode in 1990.   The theatre sets had been destroyed, but nine of them were recreated at that time.  They went on to the Metropolitan Museum of Art in New York, to Tokyo, Honolulu, Baltimore, and other places.  The dolls have returned to the Maryhill Museum.  One third of them are exhibited each year in their theatre sets.

This is just a brief summary of the exhibition.  Much more is found in a fabulous book,  Théâtre de la Mode: Fashion Dolls: The Survival of Haute Couture.  (I have the second revised edition from 2002. ) This multi-faceted book has accounts of the trials faced by the French fashion industry during the war, the hardships of life after liberation, the exhibition design process, French fashion trends, and costume renovation, as well as inspiring art photographs by David Seidner, and a color catalogue of the dolls still in existence.

With all the bad news we’ve had lately, I found it encouraging to read about these teams of artists letting their creativity flow in the midst of hardship, to inspire and support others.

← Multiple Technique Practice Piece — the Back
The Milliner’s Secret →