Eighty Years Ago in Mexico

Finding clues in the most unlikely of places…

More beautiful textiles arrived from my mother-in-law’s house.  She told me that her in-laws had traveled to the West and Mexico on camping vacations every summer, and she thought that’s where these came from.

Next we have a smaller piece, maybe more of a throw rug, although it doesn’t look like it was ever used.

Then there are two very coarsely woven “toss rugs,” that were just meant as tourist souvenirs.  (There is some color bleeding on these, but the whole house has been flooded several times, so it could be that another textile bled on to these.)

Then we have the pièce de résistance, a beautiful serape, or as they spelled it then, a zarape.  This too, has about 12 warps to the inch, but they are fine cotton warps; and there are about 60 wefts to the inch.  Most of the weft is wool, but the thin white stripes seem to be cotton.

Of course these are still to be seen in souvenir shops, but with sadly diminished craftsmanship.

Stepped diamond, requiring many small butterflies of weft, instead of one weft crossing the entire piece.

Of course I was curious to find the date of their manufacture.  Then in one box of memorabilia, I came across this guidebook:

The book was published in 1937, but did my husband’s grandfather buy it a few years before they went, to plan a good trip?  Did he buy it afterward as a souvenir of what they had seen?

Fortunately for me, they marked their intended destinations on two of the maps in the book!  So I was guessing they bought the book for research before traveling.

The towns of Tamazunchale, Puebla, Cuernavaca, and Taxco are marked.

Some interesting notes from the book:

AFTER LEAVING Colonia Junction, and between Klms. 75 and 70, keep a sharp look three or four points off the port bow for the snow capped peaks of IZTACCIHUATL and POPOCATEPETL, and don’t look for them on the ground but in the Heavens.  They are more than eighty miles distant at this point.

If still full of pep, and the day is not too far gone, it is advisable to turn off at Klm. 27 for the pyramids. (You should have at least 3 hrs. of daylight to properly see these monuments.)

SAN JUAN TEOTIHUACAN PYRAMIDS… The archaeological zone comprises several square miles but only 500 acres have been excavated.  DON’T miss this!  Pass up anything else, or all the rest, but don’t pass this up.  Who built them?  When?  Quien sabe.  Your guess may be as good as the next fellow’s.  But they are here, and they have been for thousands of years.  What a wonderful thing, after all, to be able to motor in a few days from your home over an unsurpassed scenic highway direct to these awe-inspiring, stupendous monuments left by some misterious [sic] race thousands of years ago!  Suppose one could motor direct to the pyramids of Egypt without having to ship one’s car across the Atlantic, requiring weeks and costing hundreds and hundreds of dollars?  Wouldn’t we think it wonderful?  But, even if we could do this still we wouldn’t see anything more wonderful than TEOTIHUACAN.

It goes on for quite a while, but I think you have gotten the flavor of this fabulous guidebook.

Being that this book was published by a souvenir store and cafe, there are several ads scattered through it.  Here is one showing their merchandise,

and here is my favorite — it basically says, “Just buy everything at our place here on the border and save yourself a lot of trouble.”

“You can get those curios just as well on your way back, and save the trouble of lugging them all over the country.”

So is that where these rugs and the “zarape” came from?  I can’t be sure, but chances are there are more clues tucked into a box somewhere.

And then, in a different box, I found a little brown paper sack, with this tie folded up in it.

Not the most attractive of ties.

I wasn’t fond of the color choice, and as a weaver, I really thought the cloth should have been fulled a little to let the threads bloom and blend with each other into something that looked more like finished cloth, instead of a collection of threads that just happen to be next to each other. 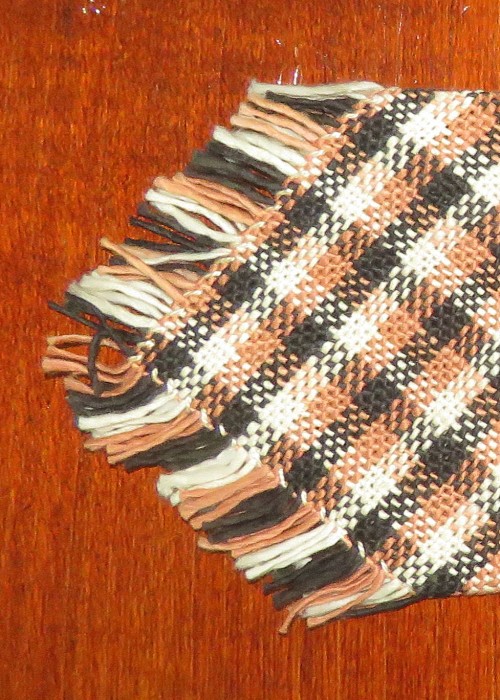 But then!  I noticed this small note on the bag.

Spun glass!  No wonder it looks like that.  I hope it was a short-lived fad because it can’t have been safe for the workers.

So that is our little trip back in time and south of the border.  Who knows what will turn up in the next box?

← Greek Costume Dolls
All Singing! All Dancing! from the Archives →

25 thoughts on “Eighty Years Ago in Mexico”