In Awe of a Master Designer and Stitcher

You think you know a person…

… and then you find out she’s been interviewed by NPR and the BBC, had an offer from the Guinness Book of World Records, turned down that same offer — all over an amazing masterpiece of cross stitch — and you didn’t even know she was a stitcher!!

I met Jo Roberts about 5 or 6 years ago, through the neighborhood association for our weekend property out in the Texas Hill Country.  She was the treasurer and I had just volunteered to put together the newsletter.  I came to know her as someone extremely energetic, precise, and focused.  She knows the proper procedures for running organizations, and can explain them simply and clearly.  She has a high-powered job for which she travels just about every week, driving 4 hours each way to and from the airport.  Her home in our neighborhood is perched on the side of a rocky ravine, and she designed and built it herself — and by “built it herself,” I don’t mean she hired a crew; I mean, she was the one to move the lumber into place and run the power tools.  She and her husband monitor and study the songbirds that thrive there.  They also built a house in Canada in a remote area, and that house is totally off the grid.  Her husband, Aaron, also volunteers for our association, maintaining the water system and the locks.

So, with that background, you can see why I never even thought to ask whether she had any other hobbies.

But then one day as we association volunteers were emailing back and forth, I happened to mention that I was working on a quilt that day.  Aaron responded that Jo’s mom quilts, and that Jo herself had some fame as a cross stitcher, although she would probably never mention it, and that I should Google her. 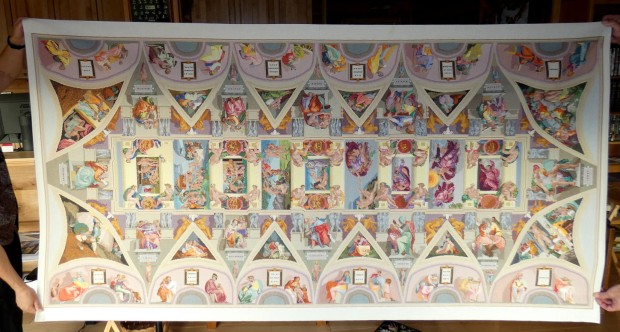 The Sistine Chapel in cross-stitch, designed and executed by Jo Lopianowski-Roberts.

Jo had designed and stitched a replica of the Sistine Chapel ceiling, and then self-published a book with all the cross stitch charts.  It is 40 by 80 inches, on Aida 14-count fabric.  There are a total of 628,296 cross stitches in it.

This article, the Stitch-tine Chapel gives all the details, and has some wonderful pictures comparing Jo’s stitched version to the original.  (There was also a detailed article in the magazine of the American Needlepoint Guild, Needle Pointers, in July 2005, but I have not been able to find that online.)

The first thing I did after getting my breath back, was to wangle an invitation to their house, so I could see this incredible piece for myself.  They succumbed to my hints quickly, and invited my husband and me over for dinner.

It was a wonderful evening.  After a house tour, some time out on the deck watching raccoons and deer, and a tasty dinner of braised short ribs, I got to see the Chapel in depth and take pictures.

Figure from the “Naason” lunette.

The faces were made with quarter-scale stitches.

Then we all settled down with tumblers of postprandial beverages, and I got to talk textiles to my heart’s content.

I think one of the things that stands out most to me about this piece, is the way that it captures the curvature of the ceiling, even though it is perfectly flat.  Even in the detail shots, you can see how the border lines make the fabric look three-dimensional.

I love the colors and the spatial quality.

Jo did use a computer program in her design, but she couldn’t just scan in a picture of the whole ceiling and have the program do the work.  The restoration of the ceiling was complete in 1994, so a number of high-quality art books were available to show sections in detail.  However the photos were in different scales, and taken from different angles.  Jo had to find ways to meld these images together into one master image.  She printed out grids of various sizes on transparencies, laid them over the photographs to find the best fit, and then plotted the stitches into the program one at a time.

Next she had to choose colors.  DMC makes 426 colors of embroidery floss, but that wasn’t enough to capture all the shades in the original.  Plus Jo has some color-blindness!  Aaron came to the rescue and helped pick colors. They used all but five of the DMC colors.  However they ended up with almost three times the number of colors that DMC produces — 1,206 in all — by pulling one strand from two skeins at a time, and blending them together.

Now Jo being Jo, she didn’t just grab thread and start stitching.  Here is her notebook of the one-inch square stitch samples she made for all the colors. 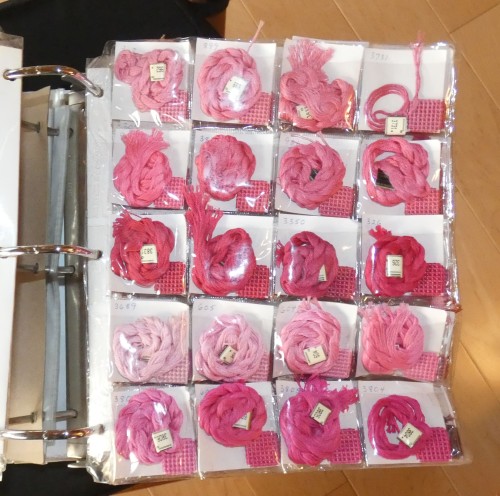 For this next two pictures, I did not crop out the background so you can see the wall of glass that Jo built into the house, the floors she laid, the shelving she put in, the outlets for the electric lines she ran.  My favorite quote from her, as I was talking to her about her design process and all the hours spent stitching, was when she said, “Well, the house slowed me down for a while.”

Stitch reference notebook, in the middle of a hand-built house.

So let’s talk about the hours spent.  Most days Jo spent at least one hour on the project.  She had the cloth set up on a frame, like a quilting frame, that she brought with her on all her travels, and set up in the hotel rooms.  Aaron had the idea that they would document the stitching by taking pictures after each 20 hours.  Toward the end, she really wanted to get done, and spent three hours a day stitching after work, and six to seven hours a day on the weekend.  Her total hours were 718 on designing, 68 on choosing colors, and 2,872 on stitching.

Jo and Aaron Roberts with her Sistine Chapel.

The piece was finished in 2004, and has been on display in several shows.  In Austin, Texas, Jo was present with her piece to answer questions.  I asked her what she heard most often from viewers, and she laughed and said, “‘C’mere!  C’mere!!  Look at the back!!’” which of course was something I had said too!

The flawless back of the piece.

When it was on display at the Tennessee American Needlepointers Guild seminar, Jo got the idea to publish her charts as a book.  One version is full color, spiral bound, and it is available here at Lulu.com in paperback or as an e-book; and there is also a companion book with the charts in black and white, and in a larger scale.  (They are much less expensive at Lulu.com than through Amazon.)

One thing I didn’t know before, is that counted cross-stitch is one form of needlepoint.  The American Needlepointers Guild says that needlepoint is “anything done with needle and thread on a readily counted ground.”  Jo has tried weaving and quilting in the past, but prefers the needlepoint arts, because she enjoys the space for creativity within the structure of the counted background.  She would love to see needlepoint get the respect that quilting gets.

Jo enjoyed the different aspects of this project, both the designing and the stitching.  She said that all that time working from the photographs of the Sistine ceiling, gave her time to really notice and appreciate the depths and details of Michelangelo’s work.  She has ventured into stitching designs from her own photographs as well.  When I was there, one of the pieces in progress was capturing a misty morning and the dew on a spider’s web, and she is working that on Aida 18-count fabric, I believe.  (Maybe smaller. There were about 40 threaded needles, each laid on a tiny little magnet, labeled with the thread color number.  I was a little overwhelmed and did not write down the fabric count number.)

She especially likes the challenge of translating one art form into another.  She is creating a piece from a photograph of the ruins of her grandfather’s home town, after World War II.  This one has different stitches to bring out the different textures.

She said she would love to do another large piece, based on Islamic art this time.

For me, it was just an amazing evening.  I got to see such a variety of stitched pieces, as well as quilts made by Jo’s mom, and I got to talk about the history and philosophy of art and textiles for hours.  It was like my very own personalized TED talk!

46 thoughts on “In Awe of a Master Designer and Stitcher”