Putting Herself in the Picture

Last week, in one of my favorite used book stores, I found the book Women’s Worlds:  The Art and Life of Mary Ellen Best 1809-1891.

Mary Ellen Best was a professional artist active in the 1830s and 1840s.  She painted for sale, but she also “painted her autobiography,” painting the places, people, and events of her life, everything from hotel kitchens to cathedral towers to nighttime trips on steam boats.  In 1840, Ellen married a school teacher she had met in Germany, and continued to document their life together with her paintings.  She painted an estimated 1500 pictures, and more than 370 survive.

They could easily have all been destroyed.  A descendant who had inherited a group of Best’s watercolors approached Sotheby’s about selling them, but was told they were unsaleable.  Fortunately another colleague saw them and promoted them as a diary of 1800s life, and got them the attention they deserved.  Then the next year, another descendant, totally unaware of the first sale, came in with a complete album!

In piecing together Best’s biography, author Caroline Davidson discovered that Mary Ellen’s sister Rosamund had kept a written record of family events, and was able to mesh both the visual and the verbal accounts to give a rich picture of life in Northern Europe.

Ellen excelled at documenting the locations and activities of ordinary life.  She painted many interiors, including kitchens — the large perfectly equipped kitchen at her grandmother’s house, the kitchens of the hotels where she stayed on the Continent, both urban and rural cottage kitchens, and even the kitchens of charity institutions.

“Kitchen at Langton”, 1830s, by Mary Ellen Best. This was the kitchen of her grandmother’s home. 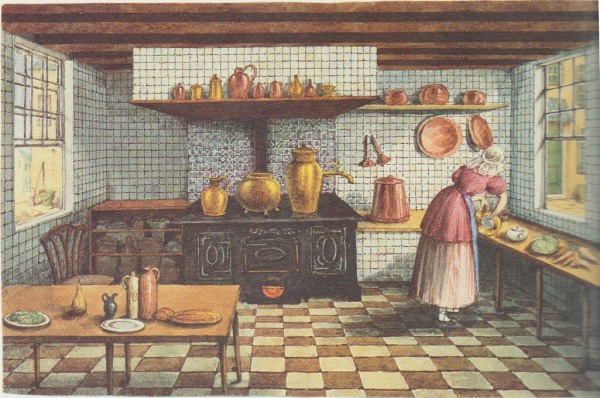 She painted portraits of servants, market sellers, patrons of outdoor cafes, and workmen.

“Portrait of Frederike Cramer…a short time in our service…”, November 1834.

She painted festivals and religious processions, collections of armor and paintings. 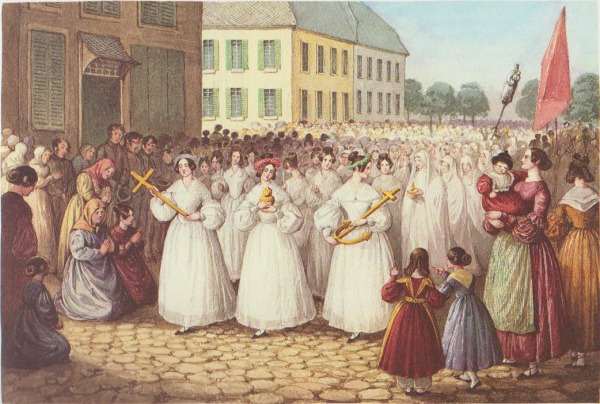 “Procession at Dusseldorf, October 14, 1838”, by Mary Ellen Best. Since I was just in Dusseldorf, I had to show this one!

Sister Rosamund wrote about the toys Ellen bought for her nieces and nephews; Ellen painted scenes of the booths where she bought them.

I love all the detail she included.  In this picture, “Exhibition of the Works…” you can see the elaborate chandeliers…

“Exhibition of the Works of Modern Artists in the Ball-room of the Goldnes Ross Hotel, Frankfurt,” May 1835, by Mary Ellen Best. Best is seen in her own painting, studying the catalog.

…And in this one, you see the same sort of chandeliers, wrapped in cloth to protect them from flies.

“The great room in the Forsthaus, a place of public entertainment in Frankfurt Forest, with our own party drinking coffee”, August 1835.

And what I really love most is the way she placed herself into her own pictures, sitting in a hotel room with friends, or buying things at a market stall.  Once she showed herself painting a clock tower, with villagers and children gathered around her to watch her work.

I think any account of this artist’s life would be interesting, but author Caroline Davidson does an excellent job of adding layers of knowledge and interpretation to her account.  She matches details from sister Rosamund’s written chronicles to Ellen’s paintings.  She explains the details of daily routines that are portrayed.  She tracks down the location of some of the paintings and furnishings that appear in Ellen’s interiors, and describes architectural changes in the buildings that Ellen painted, if they still exist.  For example, in the caption for “Kitchen at Langton” shown above, Davidson writes, “The kitchen table is still in use at Langton Hall, which is now a boys’ preparatory school.”  She also explains differences in the lives of working male and female artists of the time.

One thing that is very odd about this book though.  It was initially published in Great Britain in 1985, by Chatto and Windus, Ltd. of London, with the title The World of Mary Ellen Best.  The edition I have is also from 1985, but from Crown Publishers, Inc. of New York.  (I am not sure why they felt like they had to change the title to Women’s Worlds, because Best painted plenty of things that would appeal to men’s traditional interests, including wine vaults, underground water reservoirs, card players, and so on.)  But there is one huge mistake — in her painting, “The Artist at Work,” the left third of the painting is cut off, a section that shows some of her artist tools, the prints she collected and her shelf of sketchbooks.  I wonder if it is the same in the British edition.

Fortunately it is in its entirety on Wikimedia, along with some other works.

It was so hard to choose just a few pictures to share.  This is a delightful book to get lost in!

22 thoughts on “Putting Herself in the Picture”