Locked Down in History — Beauty from Harsh Surroundings

A man is sentenced to prison for an indeterminate time, condemned to stay there until he can produce what he has promised, gold from lead.  Even after four years in prison, with absolutely no results, he is promising to produce quantities such as two tons within eight days.  This situation wouldn’t seem to offer an intriguing plot, but Janet Gleeson has turned it into a book that reads like a spy thriller, The Arcanum: The Extraordinary True Story.

In 1701, at the same time the French government was experimenting with modern economic ideas, it was still a common belief that base metal could be changed into gold.  Even educated people and royalty held this belief and searched for the formula or “arcanum”.

A young man in Berlin, Johann Frederick Böttger, demonstrated turning silver into gold to some of his friends. To this day no one knows exactly what he did, but they found it convincing and spread the word.  He may have been hoping to arrange for support while he continued his research, but unfortunately for him, the King of Prussia learned of this transmutation and summoned him.

Knowing that he could be tortured and even killed once his deception was uncovered, Böttger escaped to Saxony. But that was no solution, as Augustus II the Strong, Elector of Saxony, decided to keep Böttger for himself, imprisoned until he revealed the secret of the arcanum.

Just as with Louis XIV of France, Augustus loved his wars and his luxuries and he was impoverishing his kingdom.  As the years passed with no miraculous gold popping into existence to bail him out, one of Augustus’ advisors suggested that at least Böttger could be set to a new problem — creating a substitute for the beautiful, expensive Chinese porcelains that Augustus collected.  Porcelain was so rare and so sought after that it was called “white gold.” If Böttger could discover how to create it, the sale of porcelain could bring money into the kingdom — or at the very least, keep Augustus from spending so much money outside of his kingdom.

Augustus agreed, and in 1705, had Böttger transferred to another prison, the Albrechtsburg fortress in Meissen. 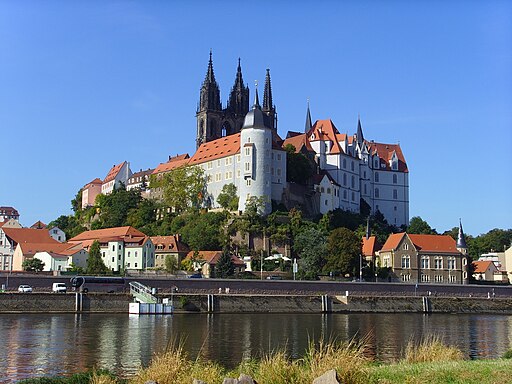 So now you know the rest of the story.  The secrets of porcelain manufacture were indeed discovered after many years, and incredibly fancy things were produced.  (And eventually Sèvres came along, and Limoges, and as our ancestors came up in the world, they collected it too, and now a lot of us think it’s more trouble than its worth because it won’t go in the dishwasher, and so I get it for 50 cents a plate at the thrift store. )

German, Meissen; Beaker; Ceramics-Porcelain, “part of a tea and chocolate service given to Vittorio Amadeo II, King of Sardinia (1666-1732) by Augustus the Strong, the Elector of Saxony.” Circa 1725 Metropolitan Museum of Art / CC0 source

Böttger ended up being imprisoned for twelve and a half years, sometimes being coaxed with comfort, sometimes being punished with loss of privileges.  Afraid that another ruler might capture him and the secret formula, Augustus would move Böttger to different fortresses.  One move resulted in him being denied even books, paper and ink for a year.

Often his staff was imprisoned with him.  As they struggled to create true porcelain, they had to experiment with different kinds of kilns.  Gleeson captures the atmosphere in telling details:

The vaulted chambers of the laboratories were poorly ventilated by small windows — as a defense in medieval times against enemy incursions — and despite the chimneys into which the furnaces were built the heat in the room became so stiflingly intense that the men’s hair was scorched.  Shoes offered scant protection against the searingly hot stone floor that blistered their feet…as the furnace continued to rage the very fabric of the vault that contained it threatened to collapse.  Lumps of rendering and plaster turned silver in the heat and began falling from the ceilings in large molten fragments. Stones loosened from the rendering exploded like bullets into the vault and littered the floor.  Smoke from the furnace mingled with the moisture-laden atmosphere, filling the rooms with noxious fumes.  It was barely possible to breathe and the sweat pouring from the brows of the men congealed the soot and dirt staining their faces and fell into their eyes, partially blinding them. (pp. 74, 74)

Gleeson masterfully weaves into the account the backstories of the rulers and scientists, the history and science of porcelain, and even the procedures for making and enameling it.  Other than the picture of a porcelain piece on the cover, there are no illustrations in this book, but her descriptions plant images in your mind.  Speaking of the designer Kändler, who came after Böttger, she writes:

Nothing was too difficult or too bizarre to be made from porcelain.  He shattered the conventions governing the design of tableware and decorative objects, replacing them with a repertoire of incredible novelty.  On a visit to the factory showroom you might have seen teapots modeled in the form of monkeys or exotically plumed birds; sugar sifters cast as women astride cockerels; chandeliers like branched trees festooned with exotic birds as richly colored as tropical fruits. (p. 233)

Unlike the previous two books I have written about here lately, I would fully recommend this book to anyone.  I thought Forbidden Fashion was too repetitive, and The Queen’s Embroiderer went too deep, in too many directions at once for me to follow easily; but I re-read The Arcanum just to enjoy the colorful word choice and sentence structure.

And in researching this post, I have learned that Gleeson has written a lot of other books, including one on John Law, the Scottish economist who figured so heavily in The Queen’s Embroiderer.  I can’t wait to read that and her other books!

Throughout this crazy year, I have been enjoying the YouTube videos from The Frick Museum in New York, and a recent release complements this book:

It was wonderful to see illustrations of the people and objects involved!

Category : Book Reviews, Books, Nothing to Do with Textiles
Tags : book, books, video

12 thoughts on “Locked Down in History — Beauty from Harsh Surroundings”