One of my daughters kindly picked up some old fashion plates at an auction and gave them to me.

The caption at the bottom has been trimmed off, but based on the font, I believe that this plate came from the British periodical The World of Fashion and Continental Feuilletons.

What is a “feuilleton“, you may ask?  It is the part of a newspaper devoted to the arts, literature, theatrical criticism, etc.  According to Wikipedia, the feuilleton section came into being about 1800.  Napoleon was severely controlling the press in France, but one publisher realized he could sneak some political commentary past the censors, if it was hinted at in reviews of books and plays, instead of being printed above the fold on the front page, and other publishers were quick to follow his lead.

The World of Fashion, however doesn’t seem to have done any political criticism.  Beneath its masthead was its selling line — “Dedicated Expressly to High Life, Fashionables and Fashions, Polite Literature, Fine Arts, the Opera, Theatres, &c. &c.”

Monthly sections included “Lives of their Majesties and the Royal Family the month of –“, “On Dits and Gossip of the Fashionable Salons,” “Marriages and Deaths in High Life, with a Glance at Projected Unions,”  and so on.

I really love to have a daily dose of escape into these old magazines, reading the descriptions of drawing rooms, hair styles, and gossip.  Here is one article that caught my eye in the July 1836 issue:

Hints on Etiquette
Rules and Suggestions in Regard to Dinner Parties

When the members of the party have all assembled in the drawing room, the master or mistress of the house will point out which lady you are to take into the dining room, according to some real or fancied standard of precedence, rank (if there be rank) age, or general importance ; that is, the married before the single, &c. ; or they will show their tact by making those companions who are most likely to be agreeable to each other. Give the lady the wall coming down stairs, take her into the room, and seat yourself by her side. If you pass to dine merely from one room to another, offer your right arm to the lady. Re- member that it is the lady who at all times takes precedence, not the gentleman… The lady of the house will of course take the head of the table, and the gentleman of the highest rank will sit at her right hand ; the gentleman next in rank will be placed on the left of the hostess, so that she may be supported by the two persons of the most consideration (who will assist her to carve). The gentleman of the house takes the bottom of the table, and on each side of him must be placed the two ladies highest in rank. You will find a party of ten convenient, as it admits of an equal distribution of the sexes — neither two men nor two women like to sit together.

It is considered vulgar to take fish or soup twice. The reason for not being helped twice to fish or soup at a large dinner party is, because by doing so you keep three parts of the company staring at you whilst waiting for the second course, which is spoiling, much to the annoyance of the mistress of the house. The selfish greediness, therefore, of so doing, constitutes its vulgarity. At a family dinner it is of less importance, and is consequently often done. Do not ask any lady to take wine until you see she has finished her fish or soup…

At every respectable table you will find silver forks ; being broader, they are in all respects more convenient than steel for fish or vegetables. Never use your knife to convey your food to your mouth, under any circumstances. Feed yourself with a fork or spoon, nothing else ; a knife is only to be used for cutting. Fish does not require a knife, but should be divided by the aid of a piece of bread. Eat peas with a dessert spoon, and curry also. Tarts and puddings are to be eaten with a spoon. As a general rule— in helping any one at table, never use a knife where you can use a spoon. Making a noise in chewing, or breathing hard in eating, are both unseemly habits, and ought to be eschewed. You cannot use your knife or fork too quietly.

But even better, I liked this subtle disclaimer in the following issue:

In our last number, we published some extracts from an excellent little work, bearing the above title, and we regret that, inadvertently, we omitted to mention the quarter whence they were derived. We, however, return to the subject, with much pleasure, and state (for the information of our readers, who having been entertained with the extracts made by us, may be desirous of possessing the mass of ” hints” of which those extracts were a sample) that the work is published by Messrs. Longman and Co., and bears the title of ” Hints on Etiquette, and the Usages of Society ; with a glance at Bad Habits.” It is, evidently, the production of a person accustomed to move in good society, and his ” hints” must be of great value to those who may be ignorant of the regulations laid down for conduct and behaviour. To persons who have resided in the country, and are just commencing a sojourn in the metropolis, we would particularly recommend the publication ; for its perusal would prevent those persons much embarrassment, and unpleasant feeling.

I wonder who called their attention to their using an author’s work unaccredited, which even in 1836, was bad practice.

So let’s look at a few of the fashion plates for January, almost 200 years ago. 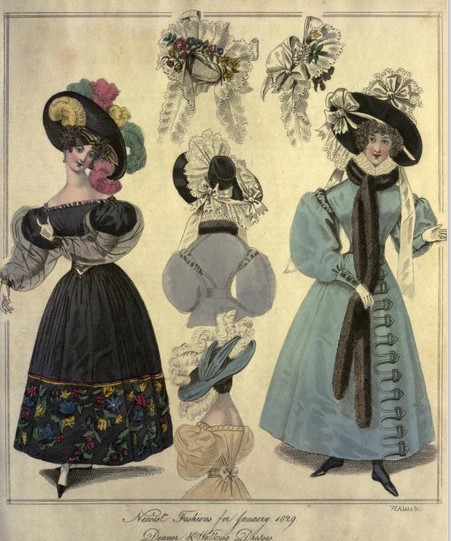 A dress of black Smyrna, with a broad border of satin, beautifully embroidered in various colours, of natural flowers. The corsage a I’Enfant, with a pointed zone, embroidered to correspond with the border on the skirt. Short sleeves of black Smyrna, under those which are long, of crepe Aerophane, a la Mameluke, confined at the wrists by bracelets of gold, fastened with white agate, or rubies. The hair arranged in Madonna braids, with clusters of short ringlets falling half over them ; the head-dress completed by a beret of black velvet, placed very much on one side ; under the brim on the right, where the beret is elevated, is a feather of bright jonquil; where the beret is brought low over the left side of the throat, is another feather placed under the brim, of vermillion colour ; this plays gracefully over the neck. The crown of this head-dress, which is very low, is ornamented with a full plumage of green, vermillion, and yellow feathers.

For the child’s dress —

When I spend time reading these old magazines, I have no desire to go back and live in the past.  There are so many reasons I am glad to be living now.  Even minor historical issues would put me off a time-travel trip — I cannot imagine having to know (or care) which lady walks into a dining room first, or having to wait until some gentleman offers to pour my glass of wine!

But I do love to look at the fashions, and just think about the huge teams of artists and craftspeople it would have taken to construct one of these dresses.  The fashion plates themselves are works of art, and I find them inspiring to look at.