Another Day, Another Dyestuff

In spite of last year’s drought, we have a lot of plants thriving in the pasture, so I have been trying some natural dyeing.  A few weeks ago I tried rudbeckia (or black-eyed Susan), and this week I tried a few more dye experiments.

There was one huge difference in how I prepared the cloth this time – previously I had read that I should use a scant teaspoon of sodium carbonate (also called soda ash) to one gallon of water.  Then I read in two separate places that I should use one cup to one gallon of water.  That’s a huge difference and I was anxious to see if it would make a difference.  I soaked the fabric samples in the soda ash solution for 20 minutes, and then let them air dry for 24 hours.

On some of  the samples, I followed that with a 20 minute dip in a soy milk solution – one part soy milk to five parts water, and then 24 hours to air dry.

I used two different kinds of plants – gaillardia or blanket flower, and wild grape vine.  Here’s the blanket flower sample in the dyepot.  The blossoms are yellow and red, but they gave a kind of greeny-yellow color.

As before, I just covered the freshly picked flowers with water, brought it to a boil, simmered for 20 minutes, and let it cool overnight.  Then the next day I added the cloth – about the same weight of cloth as there is of the dye substance.  I just estimate because I am not trying to come up with perfectly reproducible results.  Again, I bring it to a boil, let it simmer 20 minutes, and let it sit in the dye for 24 hours.

The grape vine is a much tougher plant than the blanket flower.  I pulled out some of the woody stems before I put the plants in a big enamel stock pot that I use only for dyeing.  Since the plant is so tough, almost leathery, I heated it for a lot longer to let the leaves break down and release the dye.  I allowed it to boil for about half an hour, and then to simmer for about 3 hours, and then let it sit in the dye for 24 hours.

The stronger soda ash solution seemed to make a huge difference.  The cloth started taking the dye immediately.  The two plants gave very different colors, which was exciting.  After air drying, I ironed them without rinsing.  The center three here show the results, while the two on the left show the original fabrics, and the two on the right show the previous rudbeckia dye samples for comparison. 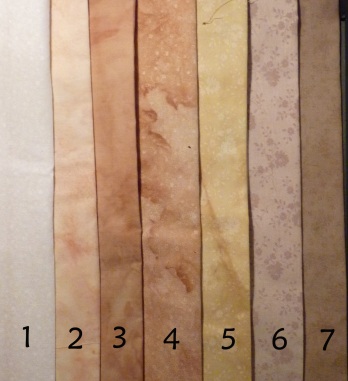 I like a varigated look, so I just throw the dry cloth in, a little crumpled up, and leave it in one spot.  That way it takes the dye more in some spots than others.  If I wanted really uniform results, I would dampen the cloth before putting it in the dye, and I would stir  more.

The soy milk step didn’t seem to make any difference in the strength or look of the color.  I think I will skip it next time.

The next step would be for me to test them for fastness.  I should rinse them, and then put them in the sun with an index card taped over part of the cloth – if the sun fades the color, the part under the index card will show the original color.  Hopwever, I’ve read that in traditional dye procedures, the dyed cloth is allowed to rest for up to a year! to let the dye particles bond better.  So until I get the urge to use these fabrics in a project, I will just let them rest.

One thought on “Another Day, Another Dyestuff”