Why I Always Watch Where I Am Going

(Herpetologically-challenged people beware – there are snake photos further along.)

Over the weekend we went to our place in the Hill Country with friends.  I remembered my camera, but left its rechargeable battery at home!  So I didn’t get any pictures of the whitetail fawns and Western scrub jays that I saw.  But one of my husband’s friends wanted flint for flint-knapping, and while I was out hunting for some, I found two pieces of fossilized deer antler, just yards apart!

We’ve actually had a good amount of rain out there, and the Texas persimmon trees were loaded with fruit.  I picked some and tried them in a solar dye jar with alum-mordanted wool.  I got deep color immediately, but it was just a bronzy brown that looks pretty ordinary.  So I left all the rest of the persimmons for the deer.

Last night I had a meeting, and by the time I got home it was already dark.  I had brought the refreshments, so I had coolers to carry in.  I was thinking about not letting my purse slide off the top cooler, when I realized I had just seen the sidewalk sort of shiver.

I set everything down and stayed put.  I tried to use my phone to cast a light but that didn’t work.  Then I realized that I actually had my camera on me, and I was able to get some pictures!  Once I realized that it was not the coral snake we had a few months ago, and definitely not a copperhead, I calmed down and took lots of shots.

I congratulated myself on my quick thinking, until I was processing them, and realized that I had never zoomed in.  Maybe I didn’t calm down as much as I thought.  The pictures were good enough to help me identify the snake as a broad-banded water snake. 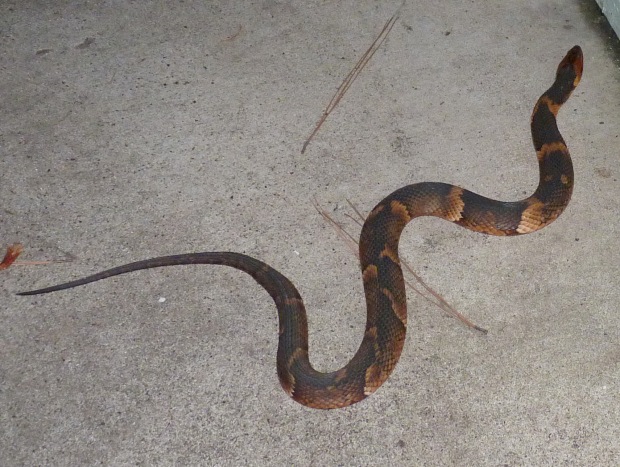 I checked my copy of Texas Snakes by Alan Tennant for similar snakes, but he says, “No other aquatic snake in this animal’s Texas range shares the contrasting colors of its bold dorsolateral patterning.” Somebody really needs to write a snake guide for people who rarely see snakes, much less memorize their details to the level that they can make mental comparisons.  Or know that a snake on land may be an aquatic snake.

This morning I was putting Harper in the kennel so I could get to quilt group, and as I turned around, I felt something flick the grass near my foot, and I took a quick little hop over it.  I was thinking it was a grasshopper, because we have huge ones everywhere, but then I decided to take a closer look.  And I saw the same snake!

I ran in the house for the camera, and he stayed where he was long enough for me to find it! 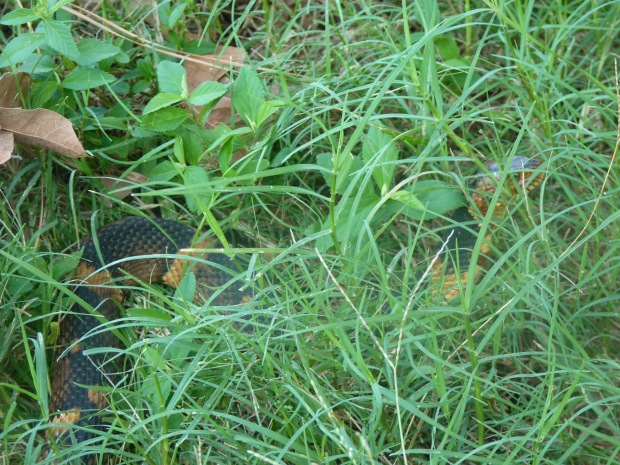 The meaning of “snake-in-the-grass” is brought home to me. 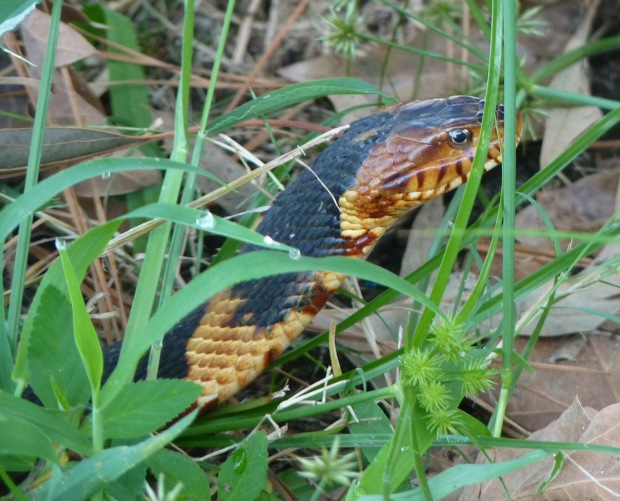 Look at the little “whisker” lines beneath its mouth.

His dorsolateral patterning doesn’t look so bold to me.

It is unusual to see the same snake two days in a row, because usually when we see a snake, and it sees us back, it takes off, and we rarely see it again!

A few weeks ago when I was working in the garden, saw something in the grass and thought, “How’d that little bungee cord get there?”

Again, I had time to get the camera and get a few shots before the snake crawled off into deeper grass. I knew it wasn’t a copperhead, because they have a Hershey’s kiss pattern on their sides, but I had no idea what it was.  One blotchy snake looks like another to me, but the strong pattern on its head helped me identify it as an Eastern hog-nosed snake.

I walk slowly, but I notice a lot of interesting things!

← Vacation by Video
Check on Stripes →

6 thoughts on “Why I Always Watch Where I Am Going”

Leave a Reply to Melanie in IA Cancel reply