Summing Up, Looking Ahead

Last year I made three resolutions – I was going to keep an art journal, use up my fabric scraps, and watch the quilting videos I had, which would in turn help me try new techniques.  I was aiming for one new technique a month.

I did not keep an art journal.  I did a few sketches, but not even in one main sketchbook.

I did reduce the amount of fabric scraps somewhat, and get them organized in color groups, but I did not come close to using them up.  It turned out that while I had a lot more scraps than I thought, I didn’t really have enough in any one color group to put together the way I would want to.  So I would say I partially accomplished this goal.

I did watch some of my quilting videos and online classes, and I learned a lot!  Again, I had more than I thought I had – they can fit lots of information on one innocent-looking little DVD.  So this goal was also partially accomplished.  I did try some new techniques, but not as many as I would have liked.

I had a quilting problem this year that sidetracked me.  I was attempting a larger than usual quilt for me, a single-size, and when I did some practice quilting I ran into all kinds of problems.  I didn’t want to risk ruining that quilt, so I spent lots of time trying to figure out the best way to proceed.  I tried different kinds of thread, needles, batting, sewing machine settings, etc.  I didn’t finish that many projects this year, but taking the time to sample and compare was very valuable to me.

In the end, it came down to a very simple issue, that I probably should have figured out years ago – the proper presser foot.  When you are designing a free motion quilting line, it’s like you are looking down at a snow-covered field, and trying to make one smooth beautiful line that will enhance it.  Your choice of presser foot will determine what you are able to do with that line.

My sewing machine has a walking foot and a darning foot.  A walking foot has a mechanism to feed multiple layers of cloth through evenly, but it is really made just to go straight ahead.

To me, using it is like driving a car. Just as a car can’t just move sideways into a parking spot, the walking foot won’t stitch smoothly left and right.  If you are trying to create lines that curve or slant in multiple directions, this foot is awkward to use.  When I first tried free motion quilting though, that is the foot I used because I just didn’t know any better.  Looking back, I am amazed I was able to get any decent results at all.

After watching some of my quilting videos, it finally sunk in that another foot might be better, so then I tried the darning foot.

It can go easily in any direction, but it has a spring, and the bouncing up and down between each stitch means you can’t stitch quickly and smoothly.  It’s like trying to get where you want to go on a pogo stick.  Even if it had worked well for me, the choppy bouncing sound it makes would have driven me crazy.

I didn’t know if there would be much difference between a darning foot and a free motion foot, but I finally worked up my nerve to try yet another foot.  Late in 2012, I had found a lovely little sewing machine at Salvation Army (for a whole six dollars and fifty cents!) and I had bought it to have as a back-up.  I hadn’t used it yet, but it had a free motion foot.  Its threading was a lot more complicated than my other machine –  had to download an old threading diagram before I could figure it out. 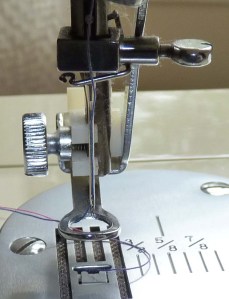 A free motion foot is more open, so you can see your stitches easily, and it just glides lightly along the fabric surface.  It guides, rather than actually pressing down on the fabric.  The results were amazing!  My stitches are still not perfect, but getting the stitches to go where you want is practically effortless – it’s like swooping around in a helicopter instead of trying to maneuver a clunky car.

I am sure I could have found this out years ago, if I had read through my quilting books in a disciplined manner, but I am more of a trial-and-error learner, and I am fine with figuring out things at my own pace.

So!  Looking ahead to this year, I am hoping that I will hone my free motion quilting skills, and get a lot of big projects done.

And here are my three slogans/resolutions for this year:

I am looking forward to reading about y’all’s ideas and goals for the New Year too – I get so much inspiration and so many good tips from all the blogs I follow!

← 52 Weeks of Fantastic Bindings, Week 52: an embroidered Bible presented by Charles I, on behalf of Queen Anne, to Sir Harry Wardlaw of Pitreavie
A Great Coat for Great Weather →

8 thoughts on “Summing Up, Looking Ahead”