(It would be very helpful if you could read this in the voice of Sgt. Joe Friday from the series Dragnet.)

Here in the deep and lonely woods of East Texas, many plants produce dyes.

Some plants give gorgeous color, like this coreopsis, that produces orange —  (you may be thinking, I don’t think Sgt. Friday ever said “gorgeous”, but there is no arguing with the use of that adjective for this color, so it stays) — 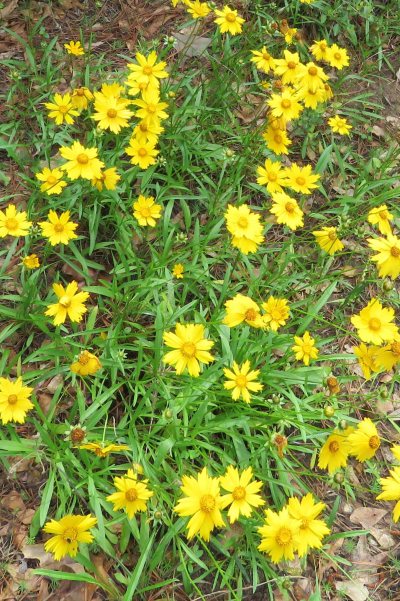 The orange came from coreopsis.

or these pokeberries, that give red —

But while many of these dye plants are well-known and publicized, some look for unknown dye sources.

In 2013, a humble dye novice, aided only by the books Wild Color by Jenny Dean, and Harvesting Color by Rebecca Burgess, conducted a series of dye experiments.  She tried different mordants, heating methods, and post-processing treatments, searching for non-fugitive colors from native plants.

Eventually she relied on one process and one process only — Step One: prep wool ahead of time by mordanting with alum and cream of tartar (common, grocery-store chemicals), let it dry and wind it into small skeins,about 10 grams. (More details about the process are in this post.)

Step Two: fill a quart jar full of plant material, pour boiling water over the plants, drop a test skein in.  Let it set in the sun all day, and cool in the dye overnight.

Step Three: Remove the skein, let it dry in the shade.  Wait a week or more to rinse.

Being ignorant about plants, the dyer did the dye tests before doing time-consuming study to identify the plants.  Plants that produced good color jumped to the top of the “Most Wanted!” list and were identified as quickly as possible, given the dearth of helpful nature guides and/or websites relating to Miscellaneous Pond Plants.

Two otherwise nondescript plants, dog fennel and waterleaf, yielded clear, colorfast yellow-greens.  The dyer points now carries dyed yarn samples with her whenever she leads nature hikes, to alert others to the value of these  “ordinary weeds”. 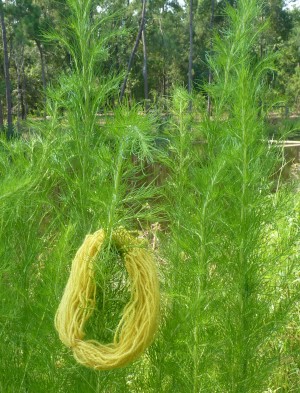 Dog fennel and dye sample. Dog fennel is one of those common names that is used for very different plants around the country. 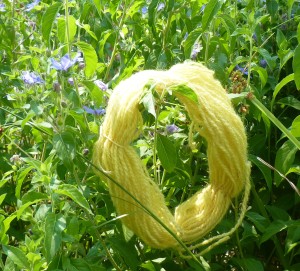 Day after day the dyer ventured out in the morning, picked a couple of plants, ran dye tests, and recorded results in the evening.  She began to recognize some of the plants, even when she encountered them far from their usual environments.  But as the dye tests often proved disappointing – with weak colors, or maybe no color at all  –  she started to get sloppy on her record-keeping.

One hot July day, some lovely deep colors showed up in one of the jars.

1 and 3, mystery plant in solar jar; 2, dipped in copper after dyeing. 1a, 2a, and 3a show how those colors held up to being in direct sunlight.

Thinking she knew which plant produced the color, she thoughtlessly tossed the plant material onto the compost heap.  Several days went by before she picked more of the plant for another test.  But this time, no color resulted!  What happened?  Had she sampled the plant at a particularly dye-some moment in its life?  Or had her memory played her false?!  What plant had produced the bronze???

She scouted the plant’s neighborhood to see what information she could turn up: 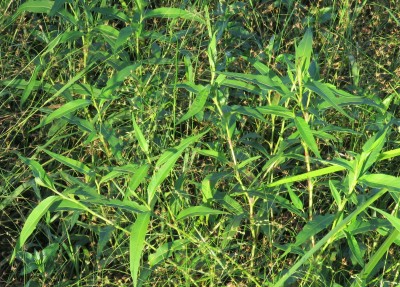 Who could pick the prospect from this crowd?

But everything looked the same.  Nothing tipped her off to which plant would produce those gorgeous bronzed tones.

There was only one thing to do: a Plant Line-up.

The possible dye producers were rounded up, brought in, and photographed.  All appeared very similar.  Only close study revealed the differences.

Number One has tiny purple, orchid-shaped flowers, and the growing tips look like grass seedheads.  Number Two has tiny four-petaled white flowers, and just more leaves growing at the tops.  Number Three – on further observation, the novice dyer recalled from two years ago that its name is waterleaf – it flowers later in summer, and it has fine but painful thorns. She realized it was not a prospect for the bronzy dye. Number Four has the largest leaves, and red shading at its joints.  Based on the look of its blooms from past summers, it is believed this is primrose willow.

Two more prospects were found and brought in.

Number Five is thought to be goldenrod, based on old flower stalks found hiding in the plant.  Number Six has coarse, reddish, dandelion-type leaves.

Prospects 1, 2, 4, and 5 were put through the dye test, (the dyer running low on jars at that time), and these are the results handed down.

All the plants produced a dye in the olive/ gray-green spectrum. Nothing to write home about.  However, the dyer is glad to have distinguished among these very similar plants, and also glad to have tested all the prospects. The best prospect for a bronze-colored dye is Number 4, the unknown plant with the reddish joints.  Further investigation will be made. AND DULY RECORDED.