The first time I heard the word pixilated was long before digital imaging.  In the early 1980s, we often spent weekends with some friends on an Arkansas farm.  A few times we played Fictionary, which is a game of trying to make up definitions of unfamiliar words to fool the other players, and then trying to correctly choose the real answer from all the unlikely variations.

Pixilated is probably the only word that remained in my vocabulary from those games.  I learned that it meant “drunk” but to me it was such a picturesque term. I could see someone just slightly tipsy, lightly tripping over their own feet, hiccuping, with their hat awry.  I could see proper women in parlors using the term to discuss their reprehensible neighbors in front of the children.

So decades later, when I saw the little squares that make up digital images, with colors seemingly scrambled from any predictable color order you’d ever seen before, pixelated seemed like the perfect word choice.

So you may remember that I’ve been working on this scrap quilt, and didn’t know what to do with the side panels.  Melanie suggested log cabin squares, and I really liked that idea.  And Joanna said, “It takes a village to make a quilt”, and I thought, “I will make the log cabin blocks look like rows of little houses!”  But as I was working on the blocks, they didn’t feel right to me for this quilt.  I placed them along side, and they reminded me of blue jean quilts.  I realized that I was not going to have room for the little roofs I had planned.  It seemed like the side panels were of a different era than the center, and there was already a lot going on there. 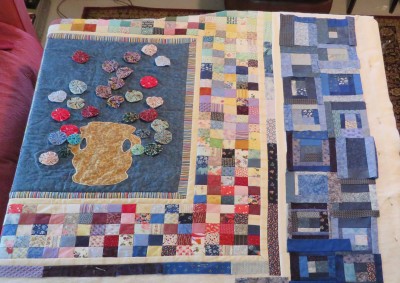 Trying the blue log cabin squares with the center.

I used photo editing to see what it would look like with these blue panels on all four sides.

(Also, I used random-width strips for the log cabin blocks, and the strips varied a lot in value.  I think if I had stayed with a uniform width and more subtle values, I would have liked the effect better.  But now I have a lot of blocks ready for another quilt.)

So I tried larger squares, and I liked that and went with it. 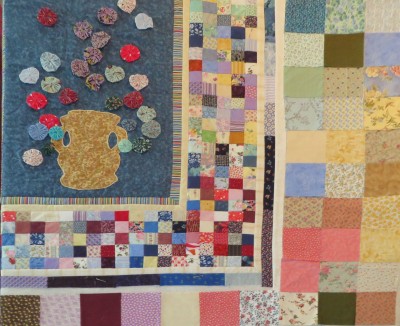 Trying out larger squares around the sides.

I hope it is not as crooked as it looks in the picture!  But I am happy with the overall effect.  It is not the perfect quilt, but it will be useful.  In weaving we do a lot of color gamps and weave structure samplers to try different effects, and that is how I am viewing this quilt, as a visual reference to see what color and design combinations appeal to me, that I want to do more of.  I still need to do the quilting and binding, and then I can get to arranging the yo-yos!