In this season of harvest, I bring you some creative costumes from the bountiful Rio Grande Valley of  Texas.  They were made in the 1930s, 40s, and 50s, for the annual Birthday Party in Weslaco, Texas.  To promote the region’s agricultural products, each costume had to be made from fruits and vegetables!

I came across this collection of costume photographs from the Weslaco Museum, at the Portal to Texas History.  I received permission to use some of them here, but I encourage you to go take a look for yourself – there are 305 photographs in total, and the work is amazing.

Most of them are stylish day dresses or formal gowns, but there are also creative entries including a drum majorette, a nurse, a naval officer, an Elizabethan courtier, and a skier.  In all of them, the cut and detailing are original and well-executed.

Many of the photographs have only a standard caption about the costume contest – the contestant’s name, specific materials, and even the exact year of competition entry is not known.  And that photos that do have information, leave me wishing for more!

In some designs, the organic source materials are apparent.  Here is a dress made from some sort of leaves or possibly poinsettia bracts:

There is no further information about this entry, not even the color of the dress.

And here is one of my favorites, a beautiful gown and wig created from cotton — not woven cloth, but what looks to be just carded cotton sliver.  (Possibly a little worse for wear.)

Amparo Rodriguez, in a dress of cotton.

This next photo is undated, but I think we can assume that it is from the early days of WWII.  I love the jaunty salute of the sailor in her outfit made of grapefruit peel!

Adorable sailor suit made of grapefruit peels, on a contestant whose name was not recorded.

I love this ensemble.  I don’t think it would look out of place in the 1939 movie The Women (you know the one — Norma Schearer, Joan Crawford, Rosalind Russell).    Miss Carlisk represented a garden club, and her dress was made out of 1000 leaves of the acalypha plant.  I didn’t know that plant before this, but it has long red catkins and is also called the chenille plant, so I wonder if that’s what gave her club the idea.

Edrington Studio. [Dorothy Carlisk], Photograph, n.d.; (http://texashistory.unt.edu/ark:/67531/metapth21295/ : accessed November 15, 2015), University of North Texas Libraries, The Portal to Texas History, http://texashistory.unt.edu; crediting Weslaco Museum, Weslaco, Texas
In many of the pictures, it is impossible to tell that the outfit is made of fruits, flowers, and vegetables.  You would never know that they were not made of regular cloth.   Here is one in that category — it looks like sort of coarse, homespun cloth, but you cannot see any distinguishable plant parts.

Ann is representing the American Legion. She is wearing a Dutch costume that was made by the American Legion Auxiliary. The skirt was of delicate pink, made from five quarts of crushed bachelor button petals. The bodice was made from 2,000 purple bougainvillea blossoms and the blouse of 583 white periwinkles. The latter flower was used for her cap and apron, requiring 556 blossoms. The skirt featured a border of a lighter pink, embossed with tulips made from banana leaves and hibiscus petals. Trimming on neckline and sleeves, in five point star design, were created by using 150 inverted bougainvillea centers. Wooden shoes were made of Rhodes grass bloom. Cost: $17.08 Time: 723 hours.

Okay, so we know how many flowers went into it, but we don’t know how they were turned into clothing. And how did they calculate those hours?
The information with this picture of Santa Claus gives a clue.   It says that 10 bushels of flower petals were dehydrated to 10 pints, and that 120 hours went into it.  So I am guessing that the dehydration time is a big part of the hours used.  And I am picturing something like instant mashed potato flakes and I still can’t imagine how you would get those to hold together to make some cloth.  Maybe you just sort of glue them to finished cloth?  But all of these outfits seem to have much better drape than I would expect from an outfit with a layer of flower petals applied. 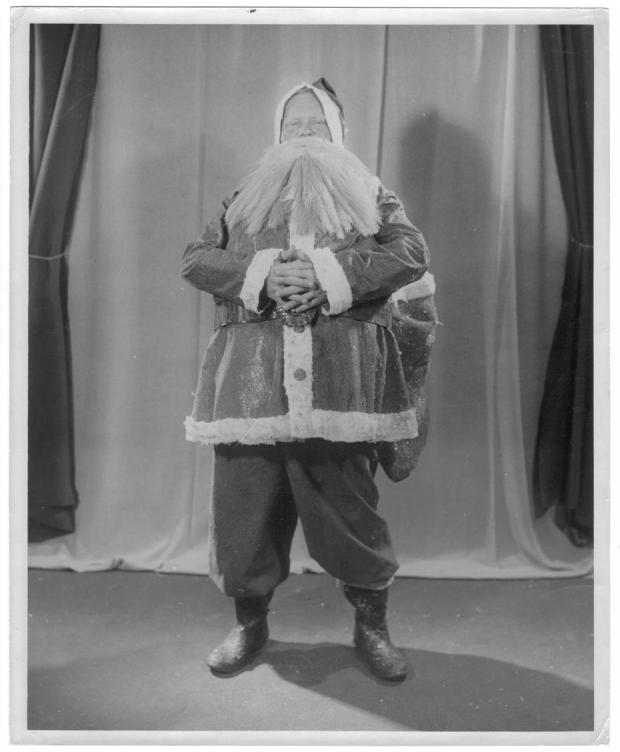 Santa Claus, in an outfit made of dehydrated flower petals. 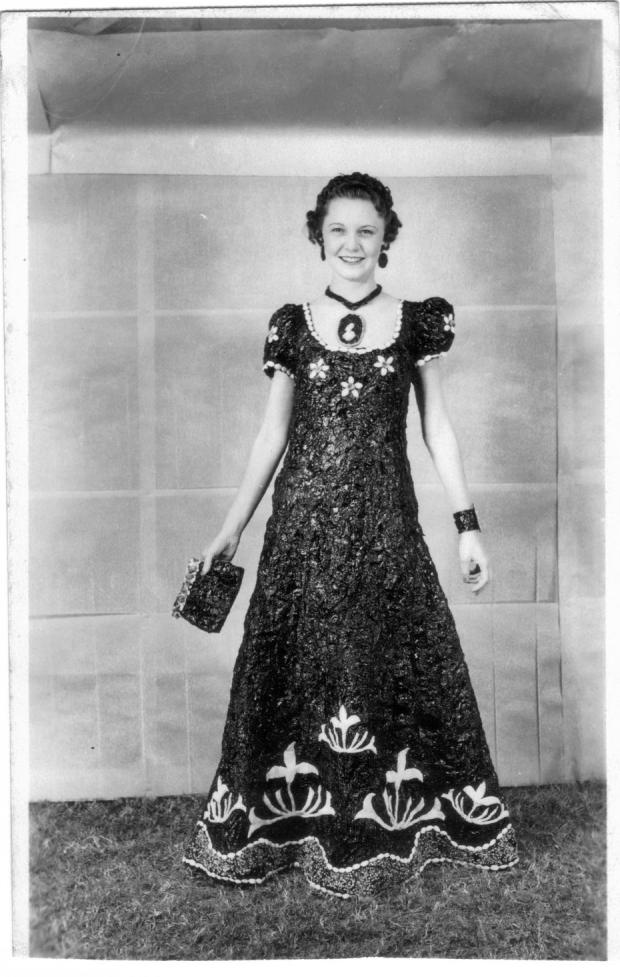 The information with this dress says that it was made of chili peppers and pumpkin seeds, and that it was on the cover of National Geographic magazine!  The problem is that though this picture is undated, the last picture in the collection is from 1952, and National Geographic did not put photos on its cover until 1959.   However they did do a story about the Rio Grande Valley in October of 1939, and maybe the dress appeared there.  I will be hunting for that issue, and hoping for a lot more details about agricultural costumes!
We have been facing some rough events in the world lately, but you know the people represented in this collection had massive troubles to face in their times too.  And like those of us that gather here, they found comfort and joy in sharing creativity.  I hope they brought you a smile today!
And thank you to the Weslaco Museum!