The Mystery of Charlemagne’s Missing Textiles

Here’s a little puzzle to start things off:

Some hints: it’s from 1836, and it is talking about a  fabric sample from the year 800.  Translation at the end of the post.

Yes, I have spent a week trying to translate old French documents.

It started when I picked up a book from 1936, The Romance of French Weaving by Paul Rodier.  It covers French weaving from the dawn of time until the time of Napoleon, and it is told in a folksy, story-tale fashion that makes for easy reading.  Since the author is comparing past weaving to his present day, I thought I would do a simple post, updating some of his information from resources available to us now.

The caption reads, “The chapel of the good Queen Blanche, still to be seen, Rue de Gobelins, Paris, and vats (now filled up) for dyeing.” Opposite of p. 74 in book.

Contrasted with this –the modern day appearance from Google Street View, Chapel of the Good Queen Blanche in the distance.

(If we could look behind the gate in that view, I think we would see that the building now extends over those vats.)

But it is never that easy, is it!

Rodier highlights the old buildings, documents, and textiles that were still available to be seen in his day, and naturally I would like to see them too.  Here is one– Rodier says is the cope or mantle of Charlemagne, given to him by the caliph of Baghdad, Harun-al-Rashid; made of silk brocade, with figures of eagles and griffins.

But when I went looking for it on the web, all I found of it was this illustration from 1871: 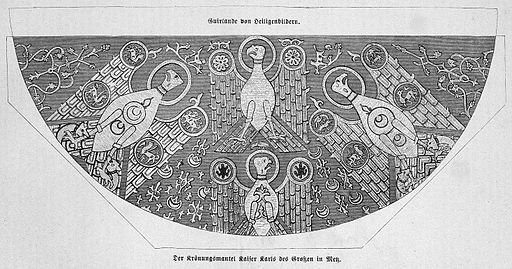 The caption reads, “The Coronation Mantle [word unknown] of Karl the Great in Metz.”

(And you will notice that this illustration shows the cope without the band of religious pictures that are on Rodier’s picture.)

(And from this point on, you don’t need to check out the links unless you get interested in this too and want to follow the trail of clues for yourself.)

And that is all I can find!  The Cathedral at Metz doesn’t have anything about it on their website, and if you had a piece of Charlemagne’s clothing, it seems to me you would mention it.  The big exhibitions in Aachen for the 1200th anniversary of Charlemagne’s death didn’t mention a mantle among their artifacts.

I can find a lot of references to the Cope or Mantle of Charlemagne, but they all refer to a completely different one, one that was woven for Roger II of Sicily in the year 1133/34 ( a few years after his coronation), and was not called the Cope of Charlemagne until about 1350 AD.  Here is an interesting video about that one —

and I am never going to turn up my nose at a textile video.  But what I really want to know is, what happened to the one in these pictures?  Is it still in the Treasury at Metz, but they just don’t talk about it?  Did they lose it in WWII?  Was it just incorrectly attributed all those years?  Did Rodier know that Roger II’s cope was also called the Cope of Charlemagne?  Or was he not interested in that one because it became part of the official coronation regalia of Germany, and he was more interested in promoting a local treasure?

So.  On to the second mystery.

Rodier also talks about a Bishop Theodulf from Charlemagne’s time, who placed samples of fabrics between the pages of his Bible, to protect the gold letters.

He left sixty-six of these pieces of cloth; thirteen have been either stolen or lost, but of those what are left there are several of pure silk in light colors — amaranth, purple-green-blue; there is a crêpe de Chine with a border of cashmere, a cut velvet on a diagonal ground.  Several others have the warp of silk and the weft of camel’s hair, or goat’s.  There is only one piece of cotton, a very fine piece, the colour of golden flax.  The designs in some of the borders are Persian, and brocaded.  (p. 39)

He makes it sound like the fifty-three samples from the year 900 made it to the 1930s, right?  Of course I want to see those!

Theodulf is well known, and his Bible is still with us.

A page from Theodulf’s Bible, from the Bibliotheque nationale de France

But the samples are not with it.  It was placed on view at the 1878 Paris Exposition, at which time scholars decided that the samples should be kept in a separate album for better study.

The University of Pennsylvania has a record of one digitized sample but it is not available to the public, and I think that actual sample is in Puy-en-Velay in France.

Fortunately, in 1836, M. Philippe Hedde had described all these samples, in a book with the lovely title of Essai paléographique sur un manuscrit enrichi de tissus du IXe siècle.  But, of the three copies of that book in libraries in England and France, none of them are digitized.  (An article about that book was written in 1993, but all I can find is the abstract.  All of the other back issues of that bulletin are for sale, but of course the one that I want is out of print.)

But!  In 1879, his brother Isidore Hedde wrote a 32-page letter to a journal, defending Philippe’s work.  It seems that some scholars were claiming that the Bible of Theodulf and its samples were not from the 9th century at all, but from 1511!  And obviously, if Philippe couldn’t recognize that, he was not much of a cloth expert.

So with a combination of Google Translate, a French-to-English dictionary, and my knowledge of textiles, I have been working on translating this letter to see if I can figure out where the samples went.

I really love the language of this letter.  There is a lot of “you did me the honor of informing me, ” and “I took the liberty of addressing you,”  and “I protest with all my strength your adoption of a conjecture you find plausible!”  Here’s a line I can’t wait to use: “So we may regret that a writer of your value could adopt a futile conjecture!”

Here is the pertinent information, from a footnote on p. 31 of Isidore’s article, to the best of my translation abilities:

Today, these fabrics, at least some of which were probably from an earlier time to the manuscript, added great palaeographic value, and assured the conservation of its interior ornaments, no longer exist in their original position. They were removed and placed in a separate album, by authorization of the hand of Monseigneur Le Breton, bishop of Puy, on the date of 13 December 1878, on the advice of very competent paleographers (Barthelmy and Leopold Delisle), as a result of the Exhibition. It would appear, they say, that this would have been decided, because of the poor condition of the fabrics. Currently unrecognizable, rolled on themselves, and threatening to destroy the drawings and characters inside the book. Note indeed a deplorable state of degradation over the entire surface of the leaves, increased by traces of wax, which we must attribute to the carelessness of officers responsible for showing this Bible to foreigners.

This is particularly unfortunate in that in 1839, Mr. Ph. Hedde was delighted by the perfect preservation of fabrics, which had kept the brilliance of their colors, and had guaranteed almost intact leaves and ornaments that were covered. Would not it better to put them in their original places, where the traces of stitching offer an easy way to restore? It would be desirable that the manuscript was deposited in the City Library, in the care of responsible Conservator.

Ah, all the lovely dependent clauses.

What I gather is that at that time, the samples had been removed from the Bible, but their whereabouts were still known.  And there the trail goes cold.  Rodier’s book doesn’t give any sources, so I can’t pick up more clues from him.

In a touching aside, Isidore says that his brother “had, throughout his life, collected samples of fabrics, ribbons, laces (all the kinds, of all materials and all countries). He had left, at the time of his death in Nimes; in 1858, a collection considerable of these various products, with notes in his hand, in a number of large volumes which unfortunately were scattered and lost.

“In 1847, Mr. Prosper Meynier, of the Chamber of Commerce of Lyon, which was near to Mr. Hedde, tried to get him to decide to give this collection to this establishment: despite my urgent entreaties, he did not do it. How this example serves as a lesson to future collectors!”

In the main body of his letter, Isidore reviews his brother’s notes on the samples, so at least I can find out their descriptions. I am having fun translating those notes.

So did you figure out the quote I started with?  “The warp is silk, the weft is goat hair, material furnished by the goat of Tibet that we know under the name of cashmere.”  Luxury is luxury, whatever century it is from!

← Mustang Grape Jelly 2015
Rules, Routines, and the Restraint of Initiative →

10 thoughts on “The Mystery of Charlemagne’s Missing Textiles”