What Do Christo, Sally Field, and Carl Icahn Have in Common?

Even art-apathetic* people know a little something about the artist Christo.

His large-scale landscape art projects like Running Fence, The Gates, and “that thing with the pink fabric floating all around those islands” remain in place for only a few weeks or months, but flutter around in our collective memory for decades. 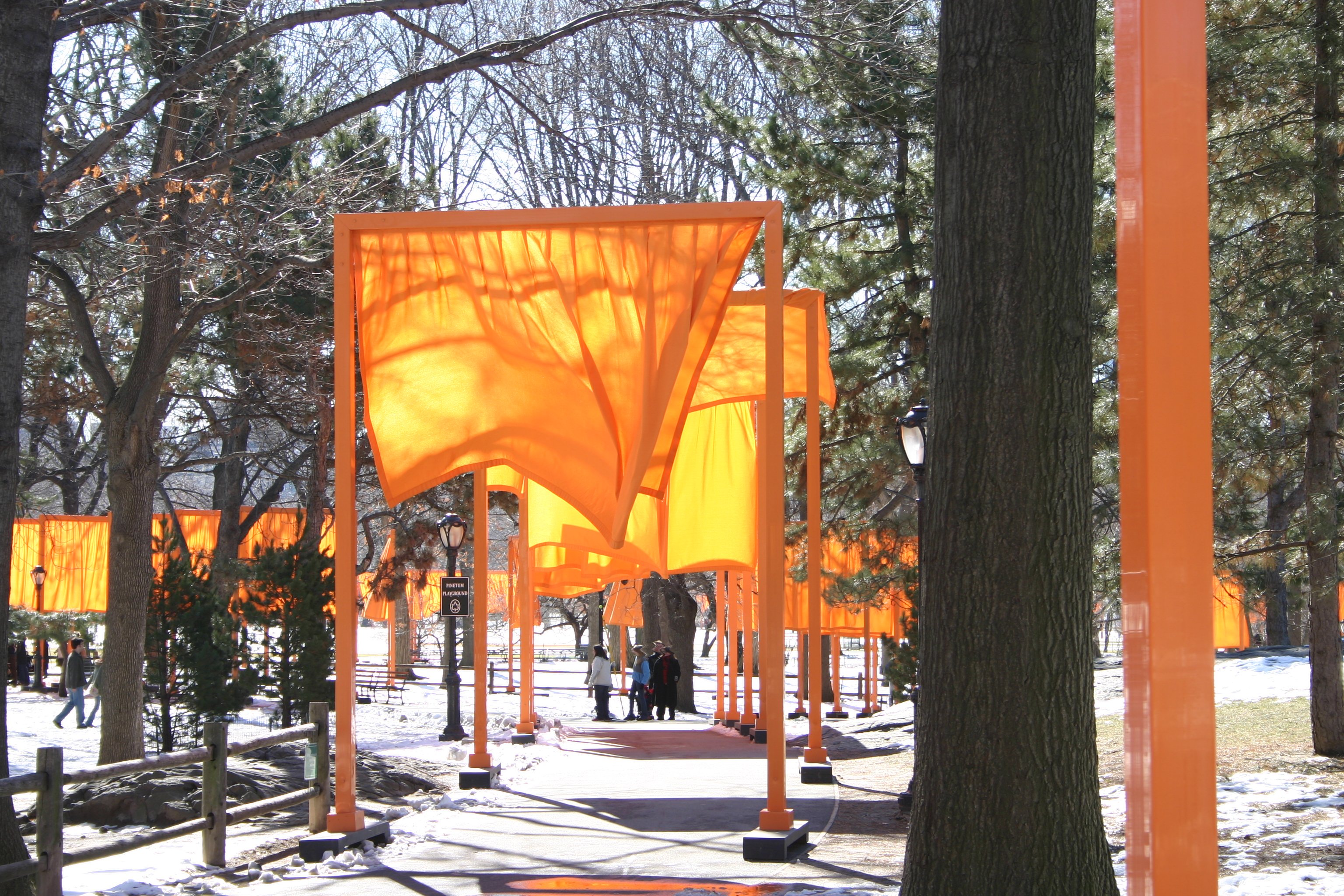 And although he began his artistic career in 1958, he still pops up in the news:

I picked up this book at the used book store, hoping to learn something about the fabrics used in these giant works of art.  Did the fabrics inspire the concept?  Or did the concept dictate the choice of fabrics?  Did they have interesting details close up?  Did they refer back to historic or traditional fabrics?  Were they woven to the artist’s specifications?

Christo and Jeanne-Claude in the Vogel Collection, 2002, National Gallery of Art.

I also wondered about the teams of workers behind these projects.  Had Christo met with the weavers?  Did they know about the projects?  What were their reactions to being involved in these art works?

One answer came early — each book section starts with a photo of a fabric sample, which are all quite uniform in color and weave.  I wouldn’t consider them artistic on their own.  But no information was given on fiber content, ends per inch, or source.

The introductory chapter gave me a lot of background information on Christo and Jeanne-Claude:

The Christos have been producing labor-intensive projects … since 1961.  They are temporary installations that exist before with the preparatory drawings by Christo and after in the form of documentary material such as the color photographs of the finished projects taken by Wolfgang Volz, the books, and the films.  They represent not only a monumental scale but also a monumental undertaking on the part of the artists, for each project requires the equivalent of constructing a complex work of architecture.  The years of planning, the permit process, the town meetings, and lobbying of politicians and landowners all factor into the creation of a Christo and Jeanne-Claude project.  Yet, the competed project remains the most important part of their work.

Owing to their unconventional format, Christo and Jeanne-Claude’s work and working methods are often misunderstood.  For example, it is often assumed that their projects are sponsored in order to defray the exorbitant costs, when actually the Christos fund every aspect themselves in order to maintain artistic control….As a rule, the revenues generated from the sale of Christo’s preparatory studies and early works provide the single source of funding for the project… [T]he couple share joint authorship of the projects.  Jeanne-Claude had participated in the public projects from the beginning, and in April 1994, they announced their decision to be listed as co-authors.  (2002, Molly Donovan, Christo and Jeanne-Claude in the Vogel Collection, p. 14)

The introduction also mentioned that Christo was born in Gabrovo, Bulgaria, which was a textile-manufacturing center, “noteworthy in view of his eventual choice of materials.”  But as far as Christo’s own thoughts on the fabric he has used, I could only find this mention:

Even when I did the early packages, I was looking to find the right fabric, the right material.  It was not the material hanging around the corner.  We were going to flea markets… At that time [1969] I was looking for material to wrap the Museum of Contemporary Art in Chicago; I tried to find a very dark tarpaulin and I went to a shop in Brooklyn.  There were many different types of tarpaulin.  I chose exactly the right tarpaulin….In the upcoming Over the River, we have hooks attached to fabric, but there are many types of hooks, many types of fabric, and we chose the right hooks and the right fabric. (p. 45)

And that was it. There was still more I wanted to know about the fabric and weavers, so I went hunting.

On the Christo and Jeanne-Claude website, I clicked around and found the 1975 environmental impact study for Running Fence.  (It’s a 414 page download, if you’re interested.) I found it fascinating! and I will go into it more in my next post.
Here is a quote from the Statement of Applicant’s Objectives:

…The physical reality of the Running Fence will be a beautiful one.  The fabric is a fragile material, like clothing or skin. And, like the structures the nomads built in the desert, it will have the special beauties of impermanence. The fabric is a light conductor for the sunlight, and it will give shape to the wind. It will go over the hills and into the sea, like a ribbon of light. (p. 22 of 414.)

There are maps and schematics —

— and finally, I found the details of the fabric used.

First of all, I found it interesting that it was nylon.  Running Fence went up in 1976 — I would think that if it went up now, some people would be opposed to this use of so much man-made fabric, and would want assurances it would not end up in a landfill.  But even back in 1975, that detail was considered, and plans for its removal were spelled out — “materials themselves will be delivered to the landowners or disposed of as surplus materials (to the trade).” (p. 66 of 414)

The company name J. P. Stevens didn’t ring any bells with me, but I wondered if Christo had chosen that manufacturer due to their reputation of fair labor practices, or because it was in a historic mill, or for some other symbolic reason.  Maybe he had visited the factory, or staged a public relations event, and perhaps the fabric company might have a mention in their archives.

Well, apparently there was no consideration of factors like those, but what I learned about J. P. Stevens Company made me forget Christo for a little while as I followed its history.

At the time of Running Fence, J. P. Stevens was the second-largest textile company in the US.  It had 77 plants, all but 4 of them in the South.  Workers at its plants in Roanoke Rapids, North Carolina, had voted to unionize in 1974, but as of 1979, they still didn’t have a contract.  Does this bring to mind a mental image of Sally Field up on a sewing table with a sign that says “UNION” held over her head?  It should, because the movie Norma Rae was based on the actions of a J. P. Stevens employee, Crystal Lee Sutton.

(The North Carolina mills were making sheets and towels, not the industrial fabric that Christo used, but I am curious to know if he was aware that all of this was going on at his supplier, or if it made a difference to him.)

In 1977, the Amalgamated Clothing and Textile Workers Union started a nationwide boycott of J. P. Stevens.  By 1980, the union celebrated getting the company to finally issue contracts, but by 1981 the manufacturer was having problems maintaining profitability, and “streamlining” began, cutting thousands of textile jobs.

J. P. Stevens was sold to WestPoint-Pepperell in 1988, and the merged company was bought by Carl Icahn in 2005, and he outbid another investor named Wilbur Ross, our current Commerce Secretary.

This was all so interesting to me that I thought I’d take a look at the Nylon 6,6 fiber that the fabric was woven from.  Nylon was invented in 1935 by a DuPont scientist, Wallace Carothers, and Nylon 6,6 is a type often used when stability and strength are needed.  In 2004, DuPont spun off their fiber divisions to the Koch Bros.  That company was named Invista, and it sued DuPont in 2008 for “unlawfully using Invista’s trade secrets to expand in the nylon chemicals business,”  being that DuPont “agreed not to compete against Invista or invest in competitors for an agreed-upon period, which has yet to expire.”

So, getting back to Christo and Jeanne-Claude’s fabric choices — before reading this book, I expected that the Christos would have put as much thought into fabric choice as they did into location, public planning, and documentation.  But, far from what I expected, their fabric choices seem incidental, not meaningful.   The fabrics were chosen to draw attention from a distance and to withstand wind stresses, and that is about it.

I also expected to find a sense of social responsibility for supply workers.  As the Christos were pioneers in environmental art, and used huge amounts of materials to execute their vision, it seemed it would naturally follow for them to be pioneers in ethical sourcing of materials.  They may have written about that elsewhere, but I didn’t see any evidence of it in this particular book.

In my next post, I will talk more about some of the environmental impact of their work, and about Christo’s art philosophy.

*similar terms my husband uses to describe his attitude toward art — “art averse,” “artophobic,” and “art-i-choke”.

11 thoughts on “What Do Christo, Sally Field, and Carl Icahn Have in Common?”