When Pink Was For Boys

More family textiles are coming my way, including some of my father-in-law’s baby clothes, from the late 1920s.

This romper has a rare note with it, saying who made it.

The construction is very interesting to me, because it was made in two distinct, finished pieces, but then sewn together as one.  The bottom of the waistband is hand-stitched to the top, and then a decorative “belt” snaps to the top, with buttons disguising the snaps. 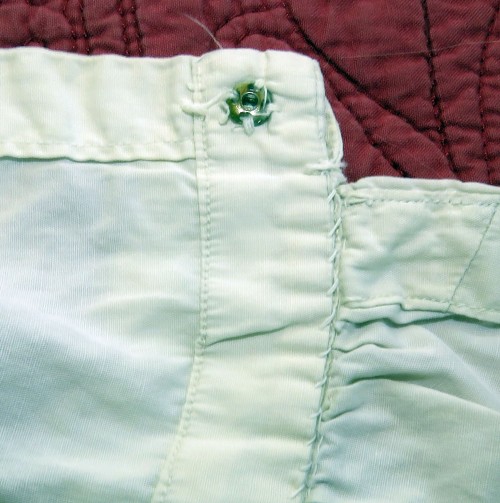 The fact that the buttons are pink would have thrown me, except that in old novels, I have read that pink was assigned to boys.

Pink buttons on a boy’s outfit.

Here are quotes from two novels by the same author, Mary Roberts Rinehart.  In the first, two characters have worked together to create a bathrobe for a boy in the hospital.

The bathrobe was finished.  Out of the little doctor’s chaos of pink flannel, Harmony had brought order.  The result, masculine and complete even to its tassels and cord of pink yarn, was ready to be presented.

In this second quote, I have thrown in more wording than strictly necessary to make the point about pink, because I love how indirectly she explains what the character is knitting and why, and how she feels it needful to hide the construction of a baby afghan from her uncle.

The end of December, 1914, found Sara Lee quite contented… Knitting, too; but not for soldiers.  She was, to be candid, knitting an afghan against an interesting event which involved a friend of hers.

Sara Lee rather deplored the event — in her own mind, of course, for in her small circle young unmarried women accepted the major events of life without question, and certainly without conversation.  She never allowed, for instance, her Uncle James, with whom she lived, to see her working at the afghan; and even her Aunt Harriet had supposed it to be a sweater until it assumed uncompromising proportions…

‘Well,’ [the doctor] said when Sara Lee opened the door, ‘it’s a boy.  Eight pounds.  Going to be red-headed too.’ He chuckled.

The doctor put down his hat and glanced at her.

‘Wanted a girl, to be named for you?’

No one is really sure what exactly motivated the color switch, or when it was made.  My own theory is that people like to adopt for girls what they perceive as masculine signs of power — the way that the boys’ names of Ashley, Madison, and Taylor have become common as girls’ names — and maybe the same thing happened to pink.

For a little more about the history of pink and blue, see this article from the Smithsonian.

30 thoughts on “When Pink Was For Boys”