I am part of an online art quilt group called The Endeavourers.  When our current theme, Spirals, was announced, I thought it was a good time to dig into my Kindle inventory and read a book I had bought a while ago, called Spirals in Time: The Secret Life and Curious Afterlife of Seashells, by Helen Scales.  I have written about the science and history parts of the book here on my nature blog, and in this post I am going to share some artistic resources I learned about through the book.

There is a whole chapter on sea silk, which is a fabric created from fibers that the Noble Pen Shell produces, to anchor itself in the waters of the Mediterranean onto rocks.  These molluscs are usually about a foot long (30 cm) but can grow longer, and these anchoring filaments, known as byssus, can have fibers that are 2.4 inches long (6 cm).  They are not particularly beautiful in their natural state, but a few people on Isola di Sant Antioco, an island off Sardinia, still know how to process the fibers into gleaming golden threads.  Author Scales traveled to the island and met four people who can still work with sea silk.  Since the number of pen shells has fallen precipitously, harvesting them is illegal, and three of the four can only get new fibers if a fisherman finds a dead shell and brings it to them.

The fourth, Chiara Vigo, was profiled in a story from the BBC.  It was called The Last Surviving Sea Silk Seamstress, and you can read it here.  Vigo supposedly knows a way to dive down and harvest fibers from living shells without harming them.  I read the BBC story last year and found it interesting, if told in a slightly breathless-with-amazement tone.   So I was interested to read Helen Scales’ account of the time she spent with Vigo, and her assessment of the claims of sustainability.  It goes on for pages, and Scales thoughtfully analyzes many different aspects of the sea-silk process.

She can’t legally be taking whole pen shells, and her website states that her annual sea-silk harvest is around 600 grams (about 20 ounces).  If she only trims their beards she must have to process thousands of shells every year (the full beards from 50 shells will yield only an ounce of sea-silk).  She would then have to leave them alone for long enough to recover, assuming they survived.  Maybe there are enough pen shells living in the water around Sant’Antioco to support a rotational harvest like this without impacting the population; but no one, except perhaps Chiara, really knows if this is the case…

Chiara is kindling a desire for sea-silk but she is also fiercely protective of its source along the shores of Sant’Antioco…The rarity of sea-silk fibres and the difficulty of obtaining them in a challenge Chiara faces, but at the same time it is the key to her fame and success.  She clearly needs to protect the source of these delicate fibres together with the museum and the livelihood that rely on them. (from Chapter Six, somewhere around pp. 161- 167, but you know how hard it is to figure out your location in a Kindle book.)

If you are interested in sea-silk, Chiara Vigo has the Museo di Bisso website where you can learn more, and there is also a Project Sea-Silk that aims to inventory sea-silk objects already in museum collections.  Pinna nobilis is on the right in the illustration below.

Alright, on to lighter subjects.  Scales mentioned this huge 20-volume book called Conchologia Iconica, online at the Biodiversity Heritage Library, and it is a treasure.  In the center of the page below is one of my new favorites for its name alone, Cloth-of-Gold Cone Snail, Conus textile.  (Although I also learned from Scales’ book that many cone snails have toxins they can inject, so I would not pick one of these up without further research.) 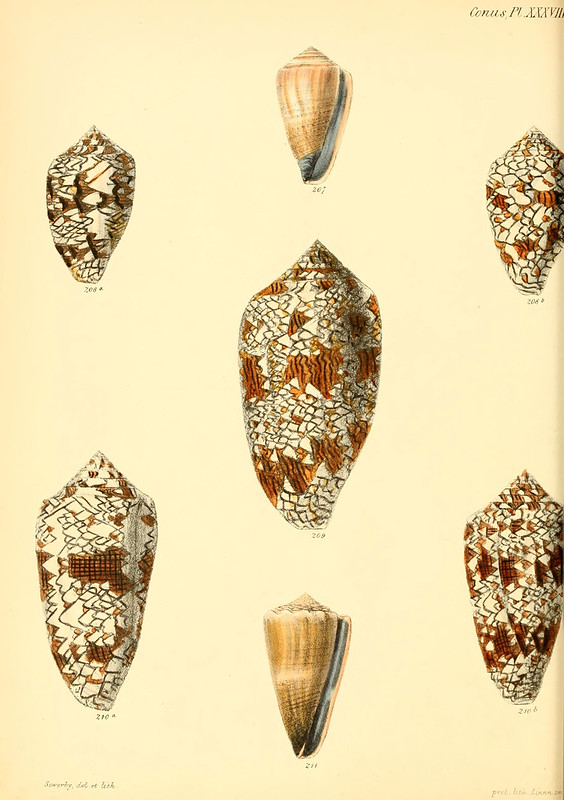 And another page, just for wishes and sighs:

By Internet Archive Book Images [No restrictions], via Wikimedia Commons

As I mentioned, I was reading this book partly for ideas for an upcoming quilt art project on spirals.  I never knew there were so many variations of spirals, and so many ways they could be embellished with either surface color patterns, 3-D crenelations and spikes, or both!

And then, as if nature’s decoration of shells wasn’t enough, Scales also pointed out shells that were used as a base for artistic wonders.  They were mounted in elaborate gold and silver settings, and sometimes etched with pictures of sea creatures.  The one below is from the Victoria and Albert Museum.  ( They have more that you can view online, along with history notes, but in complying with their terms of use, I can only use one.) 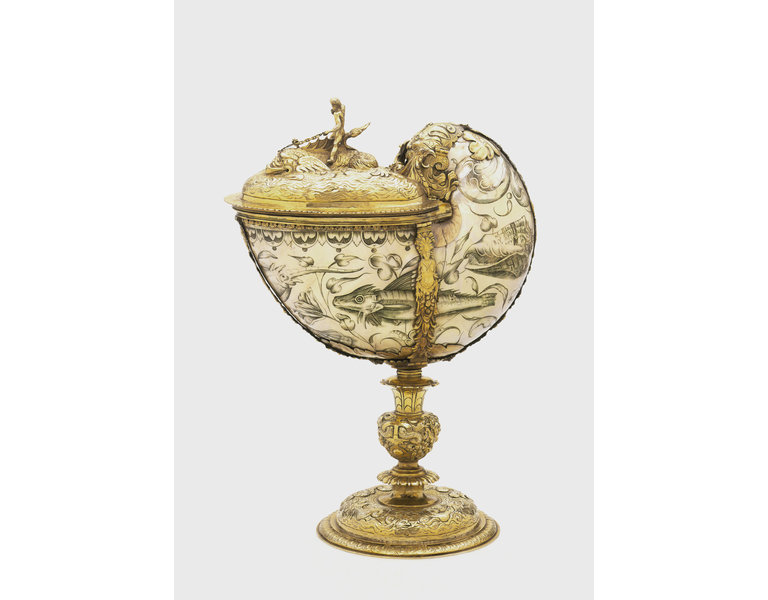 My own preference is for the natural beauty of shells, without all those ornate additions, but I do think the idea of a decorations within a spiral shape is interesting.

I enjoyed dipping into this book for a few pages at a time, and then taking my time to process everything I learned.  I skipped over some of the very scientific parts, and I wished for lots more illustrations and diagrams, but I certainly got a lot out of it!

← The Richness of Greek Embroidery
Basting, Bingeing, and Books →