Quite Possibly, the World’s Bulkiest Quilt

I started this string quilt three years ago!  At the time, I asked for setting options, and most people liked the idea of narrow sashing around the string blocks.

I thought that would be a good look too, but then I realized that because the blocks were string-pieced onto a foundation of muslin, they were already one layer thicker than a usual block.  I worried about the discrepancy between one-layer thick sashing, and two-layer thick blocks.

So the blocks sat there.  And over the years in my memory, the stack of blocks grew until I had at least 100.  And the day came when they were the next project to work on, to just get them together somehow, so that they would stop sitting on their tray, looking at me.

Well, I thought, I’ll just group all the squares in the middle, and use wide borders all the way around.

At one time I had also had a plan for which backing fabric to use, but I didn’t write it down.  And when I pulled out my assortment of backing fabrics, this one jumped out at me. 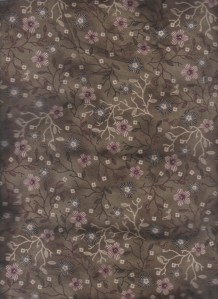 I bought this years ago for $2 a yard.  In the shop, it looked gray, but when I got it home, it was definitely brownish.   The very neutral tones seemed to be a good match for the browns and pinks in the shirting fabric strings.  It is almost like a polished cotton, a little heavier than my usual quilt backs, but it really seemed to go well with the shirting patterns, and I didn’t think it would ever go with any other quilt top.  So into this project it went.

I planned to use a queen-size wool batting.  I have used Hobbs Tuscan washable wool in the past, but for some reason, this time I had ordered Quilters Dream wool.  When I opened it up, I realized it was twice as thick and lofty as Hobbs.  And the more it relaxed in our humidity, the more it expanded.

It is literally a half inch thick, and I can count five layers.  Hobbs has two distinct layers that are easy to separate if you want an even thinner layer of wool.  The Quilters Dream wool layers seem more interwoven, and I was afraid that if I tried to separate them, I would get a big shredded mess.  (Although, trying to separate layers in a scrap just now, it went fine.)

So, are you starting to see where this is going?  Extra fabric in the top, extra heavy fabric for the back, extra fluffy wool in the middle?

I basted the batting to the backing with spray and pins.  It was the moment of decision.  I did not have to commit the string blocks to this lofty batting, I could just use some flannel and another backing for them, and come up with a new top for the ever-expanding wool.

If I did that, the uncovered wool batting would sit there for years, gathering thread scraps and dog hair all over itself.

I don’t usually complete tops before constructing the quilt. I place the center two rows (or columns) on top of the entire batting and backing, and stitch one seam down in the middle of the quilt.  This is the row that takes the most concentration, but then I can just flip each row open, stitch another to it, etc., and it all ends up looking like the best stitch-in-the-ditch ever. 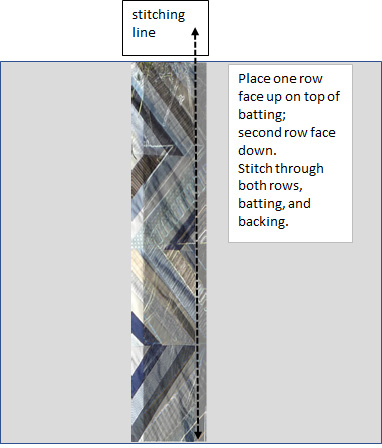 Step 1: Place both rows in the middle, one facing up, one facing down, and stitch through all layers.

Open out the two rows.

Step 2: Place the third row face down onto row two, and stitch through all layers. 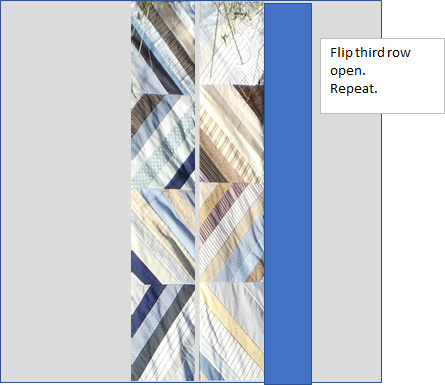 For this quilt, I thought that I would also do the quilting of each row as I went, before doing the stitch-and-flip of the next row, to keep the puffiness under control better.

I sewed the two center rows down, and tried one row of quilting.  But the diagonal lines in the blocks meant I had to keep swinging the quilt from side to side.  I could barely move it.

I decided to just stitch and flip the rows, and then hand quilt later.  I had set one of the rows down on top of some gray chambray, and I liked how that framed the shirting materials, so I added 6-inch strips between two string rows.

And then I immediately thought how much better it would have looked if I had added very thin strings to the gray chambray bars. 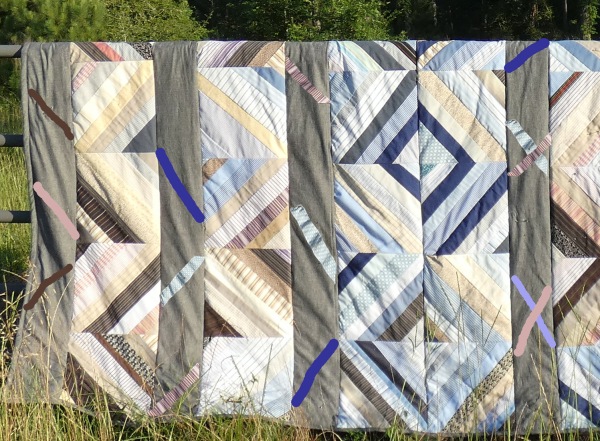 I added some thin strings to the gray bars with Photoshop. If I ever do another quilt like this, I will add them in real life.

But I was not going to unstitch, or fuse on top and then stitch the edges, so I did not even attempt it.

So this is where we are now.

The backing folded over.

It is machine-stitched at 6- or 11-inch intervals, and it is bound.  It definitely needs more quilting, but at least it is all together, and nothing can fray.  I am planning to do diagonal rows across both the string blocks and the gray bars.

And then, we will have to move to Alaska in order to use it.

18 thoughts on “Quite Possibly, the World’s Bulkiest Quilt”