Locked Down in History — Unraveling “The Queen’s Embroiderer”

I came across a book excerpt that described a French embroiderer in the court of Louis XIV – his techniques, materials, and customers¹.  I quickly bought the book, The Queen’s Embroiderer by Joan DeJean.

I should have paid more attention to the subtitle  —  A True Story of Paris, Lovers, Swindlers, and the First Stock Market Crisis — because this is not a needlework book; it is the story of exceptionally bad parenting exacerbated by economic uncertainty.  After the first chapter there is very little mention of embroidery.  But reading it taught me about some horrendous conditions in the 1700s, that made our times look good in comparison.

Louis had two priorities — to live surrounded by unimaginable luxury, and to increase the size of his kingdom by waging war around all of his borders.

Even though France was relatively well off when Louis came to power; with burgeoning agriculture, a unified government,  and trade in luxury items, it could not support both of his priorities.  Louis’ solution: pass over the existing noble class, create new officials loyal directly to him, and charge them with transferring as much wealth as possible from the people into his treasury.

Not surprisingly, these officials were not concerned with enriching France as a whole, just the king and then themselves.  Individuals could pay to receive an official position.  Salaries were low; they were viewed more as interest on an investment, plus there were benefits such as freedom from paying taxes.  One position was “tax farming”; officials predicted each year how much tax their district should produce, and paid that amount up front to the king.  Then they set about collecting the taxes in the district, and whatever they got above the predicted amount was theirs to keep.

At the same time, France went through weather cycles of exceptional drought alternating with nonstop rain, resulting in periodic years of famine.  When it was at war with all its neighbors, products could not be exported to bring in money, and food could not be imported.  And every so often there was a small pox epidemic, or even bubonic plague.

Against this chaotic background, the author DeJean follows two families, the Magoulets and the Chevrots.  The Magoulets, Jean I and his son Jean II, were embroiderers, but they were eager to jump into other endeavors if they saw a quick livre to be made. Antoine Chevrot was more of a traditionalist — he went into great debt to pay for one of those official positions, and planned for his sons to follow his path, whether or not they wanted to. Both families were deceptive, vindictive, and litigious; both lived way above their means, and were pursued by debtors — thus leaving a very detailed paper trail that still exists in the French National Archives.

In one of the first episodes of unlawful behavior, embroiderer Jean Magoulet I’s first wife died in 1694 or ’95, and he simply disregarded the law:

Upon a wife’s death, a father with children under the age of legal majority, twenty-five, was required by law to have an inventory of the family’s possessions drawn up, since at that moment, the couples’ property was divided into two equal parts: one remained his, while the other belong to the couple’s children. In addition, the wife’s dowry became upon her death the property of the children.  Until they were of age, their father managed the fund for them, but as each of them turned twenty-five or married, their father had an obligation to turn over their share of the dowry and to provide an accounting of how the funds had been managed.  By the time of [his wife] Simone’s death Jean Magoulet’s risky investments had wiped out the vast profits from his embroidery workshop.  He dispensed with his legal obligation to have a probate inventory established. (p. 83 of 377)

His son, Jean II, would follow this pattern and take it to extremes.

During this time, DeJean says, the government engaged in “uncontrolled economic experimentation,” for example, with using paper money.

In September 1701, the monarchy once again began printing mint bills and encouraging its subjects to exchange coin for the new bills.  The state planned to reissue the coins thus obtained at a new value; it also planned during the minting process to cut small pieces of each coin, thereby constituting a stock of precious metal.  Until 1702, bills were issued only to the amount of gold and silver on reserve; subsequently, the mints were authorized to print without regard for deposit.  By December 1703, 7 million of the notes were in circulation; by February 1708, that number had grown to 136 million…. [T]he crown’s debt stood at 482 million livres, while the royal treasury’s reserves were down to 20 million.

On February 1, 1711, all the money bills in circulation were pronounced worthless.

In 1715 Louis XIV died, and his successor was underage.  The regent, Philippe d’Orleans, entrusted financial matters to John Law, an economist from Scotland.

On May 4, 1716, the French government launched still another experiment with paper money.  This time, the notes were named billets de l’etat, state bills, to stress their official state sponsorship….By April 1717, a royal edict specified that state bills could be used “just like coin” to pay one’s taxes and for all official transactions…. a new trading company was created… and it was soon put in John Law’s hands.  The state-backed paper money and shares in Law’s trading company had become synonymous.

… this behemoth enjoyed an absolute monopoly on France’s overseas trade.

French newspapers were soon announcing that “prodigious quantities of silver” had begun to arrive in France straight from those Louisiana mines. (p. 147)

People were able to buy shares in this government trading monopoly.  Supported by the false belief that Louisiana was full of silver, shares increased in value from 500 livres to 10,100 livres within five months.

The French government needed to the Louisiana colony to succeed wildly, to provide a real value to back these inflated shares.  But few French people had interest in emigrating to Louisiana to build up the colony.  So Law issued a policy of deporting women forcibly, taking them from prison.

By then, Law regulated all government finance and expenditure; he was in charge of the French national debt and the mints that struck gold and silver coins.  He headed the Royal Bank; he decided how much money would be printed and how much stock would be issued.  He ran the company that presided over France’s overseas trade and the development of its colonies from Canada to Africa and the Caribbean, as well as collecting most taxes.  (p. 150)

In 1719, the financial administrator position that Antoine Chevrot had gone into heavy debt to purchase, suddenly disappeared :

With no notice, all seventy annuities controllers were informed that their posts had been “suppressed”; their offices were “to be immediately liquidated” and their income was to cease: Law planned to renegotiate the financing of these positions in order to make them more profitable for the state. (p. 153)

It was at this point that the two families collided.  Antoine Chevrot’s son, Louis, wanted to marry Louise Magoulet, Jean II’s daughter.  Both fathers were opposed — Antoine because he wanted someone higher class for his son; Jean because he did not want to hand over any of his deceased wife’s estate to any of his children.

Jean Magoulet saw a solution to his problems — the forced deportation policy.  He accused his 17-year-old daughter of prostitution and theft of 4000 livres.

Times being what they were — crowds jostling in the street outside the stock exchange each day to watch the rising shares, pickpockets lifting wallets stuffed full of that light new paper money — no one had the time or inclination to investigate Magoulet’s claims. Louise was arrested and thrown in prison, where she had Louis Chevrot’s baby.  A few weeks later, she and 155 other women were chained together by the waist in groups of 16, and put on carts to be transported to Le Havre, there to be shipped to Louisiana.  The country was in drought and it is doubtful the prisoners got much food; some died along the way.

This event found its way into the novel Manon Lescaut and the operas based on the novel.  Normally I would not issue a spoiler here and I would tell you that if you want to know what happened to Louise Magoulet, you should read the book yourself, but I found this book so convoluted, that I am just going to tell you that she managed to escape being transported to Louisiana. 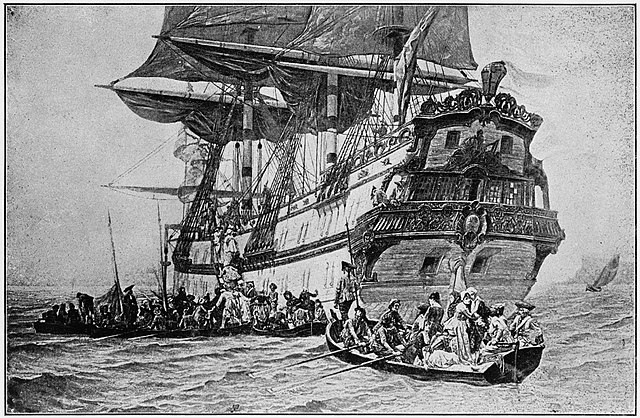 In the next few months, the French stock market crashed, the deportation scheme was publicized and protested against, never to be repeated.  However, five years later, Jean Magoulet again had Louise arrested and petitioned to have her deported! And there is evidence he planned to do the same with her younger sister.  This time there was an investigation into Louise’s character and enough witnesses came forward on her behalf, that she was released from prison.

Now.  I have read this book all the way through two times, and gone through it many more times checking the supporting details, and I still have problems following the main story.  LeJean obviously read every paper in the French National Archives about the Magoulet and Chevrot families, but she included great detail on every witness who signed each paper and every residence that was inventoried. To me, those details blurred the narrative.

A secondary thread to the story is that Jean Magoulet II took on a second identity as Clément Magoulet with another mistress and a second address just a few streets away from his primary residence, that he sometimes lied and said his daughter was 10 years older than she was, etc.  Even with rereading, I was never absolutely sure that they couldn’t just have been two completely different people.  Experts have helped edit this book, so I believe LeJean must be correct in her assumptions; but I couldn’t follow her deductions easily.

My biggest criticism of the writing is that the author constantly imputed negative motives to these people who lived 300 years ago — “This was the first incontrovertible evidence of Jean’s megalomania,” “The Queen’s Embroiderer had decided to beat the Sun King at his own game,” “Clément was a human shape-shifter who, each time he presented himself, took on a different persona,” etc.  I felt the tone should be more objective.

Still, I found the background history of French law and the stock market crash fascinating.  Although I could see some parallels to our own political situation, I was really shocked at how much power was put into the hands of one person, and at how much power fathers had over their offspring, even into adulthood.  I cannot imagine what it must have been like to have the government put forth new monetary systems and then totally cancel them within a few years.

When I tried to research this era further, I was only able to find brief summaries in other history books.  I think LeJean’s colorful narrative of the era is worth reading.

I am linking to the trade card image of Jean Magoulet.  LeJean used it in her book, but the terms and conditions of the collection were it is held at Waddesdon Manor are intimidating so I will not reproduce it here.

source of the featured image