A Jar of Buttons 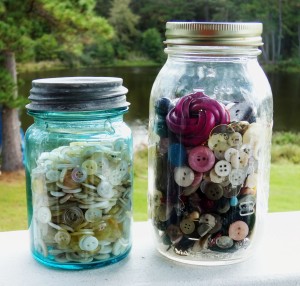 A Jar of Buttons

This is a core sample
from the floor of the Sea of Mending,

a cylinder packed with shells
that over many years

and settled together
beneath waves of perseverance,

an ocean upon which
generations of women set forth,

under the sails of gingham curtains,
and, seated side by side

on decks sometimes salted by tears,
made small but important repairs.

I found this beautiful poem in The Poets Laureate Anthology. To me, it captures what I love best about the textile arts, and that is the feeling of being connected to and honoring ordinary women, across the world and through the centuries.  It’s the feeling I was trying to capture when I wrote the poem about quilts, Old Sisters Together.  (That is not a great poem, form-wise, but it’s the kind of poem my grandmother would have loved, so it makes me happy.)

I love to keep buttons, threads, notions, and fabric scraps in glass jars where I can see them every day.  This morning, inspired by this poem, I took a few minutes to play with photographing the buttons.

I bought these button cards years ago.

The way that the buttons are wired so systematically onto the cards, has made me think they were commercial samples, but I really don’t know. I do love the look of all the wires as well as the buttons. 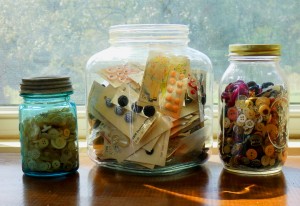 The cards make a nice background for the jars. 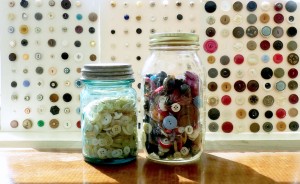 This one doesn’t need a caption but if I try to put it in the post without one, WordPress does funny things.

So many memories and dreams in just a little jar — in childhood, sitting and arranging them in patterns on the kitchen table on a rainy day, or noticing tiny shell buttons on a new doll dress; as a teen-ager, picking through the sale bin at the dimestore; as an adult, inheriting Aunt Millie’s button collection with the purchase date and price noted carefully on the card.  They never seem to get used up, just joined by more button friends!

← Tales Told by the Hemp-Dresser