I only got two (count them, two) projects done in February.

The first one was the blue and green log cabin lap quilt that was almost done by the end of January.  Here it is with its binding.  It has gone on to the VA hospital.

Binding makes it look so much nicer.

The next one is the penguin crib quilt that I started to show my basic quilt procedure.  I added a strip of yellow squares, and then end panels of the backing fabric, machine quilted it, and bound it.

I was using Hobbs Tuscany Silk batting.  How do you choose batting? you ask.  When I went to the International Quilt Festival on its last day, Hobbs was sold out of everything except for crib-size silk, and they were discounting,  so I decided to try it.  That is the kind of high-level critical thinking I apply to my choices. (I bought about four other kinds of batting from other vendors there too, but I haven’t tried them yet.)

This particular batting is too flat for me; I like lofty quilts.  I depend on the puffiness of the batting to help camouflage any stitching irregularities, and I just like squishy quilts.  The low loft matters in this quilt because I didn’t quilt it all over in the same pattern; I tried different stitches to complement different blocks.  It was good practice, but I don’t think it was effective.

I used a squared-off spiral stitch in the log cabin blocks.  I left some parts unquilted for contrast but now I don’t like that so much.  But I don’t think I would like every inch covered with spirals either, so it’s going to stay like it is. 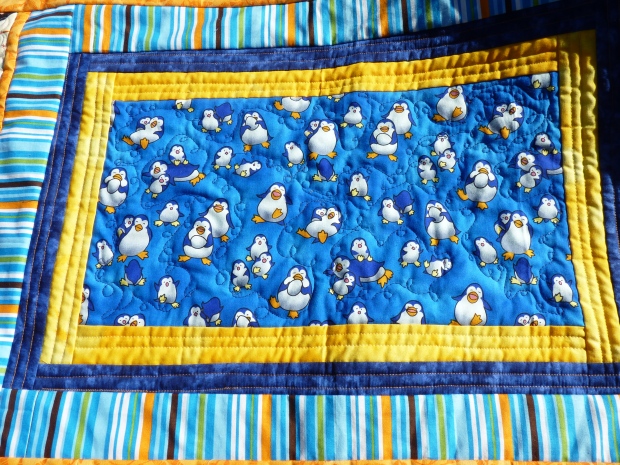 I think of this stitch as a butterfly trail, a little loop-the-loop.

I was going for a mussel-shell pattern – it really flattened the block. 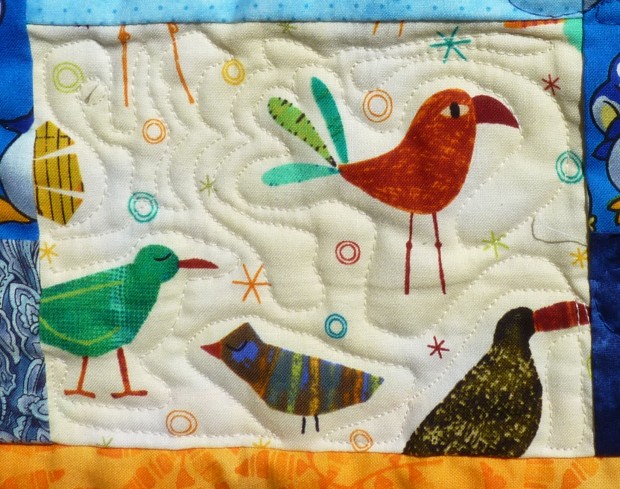 This was my favorite, but you need widely spaced motifs for it to work. I don’t think I could maneuver this stitch on a small-scale pattern.

I probably should have done an overall pattern, but I just have so much trouble making myself sew through the faces on the little animals in the fabrics!  Silly but true.

Up until now I have focused most on the colors and composition of the piecing – in the future I will try to consider the quilting pattern as I put the quilt together.

As I was putting together this post, I looked up Hobbs on the web, and they are in Waco, Texas!!  They also have unbleached cotton batting and organic cotton batting!  Looks like I will have to do some purchasing to support my homies!

15 thoughts on “Finishing Up February”