Last week I got to tag along on my husband’s business trip to Düsseldorf, Germany.  We had one day available for a side trip, so I picked a place I have wanted to see ever since I took an art history class in college, and saw a picture pretty much like this one — 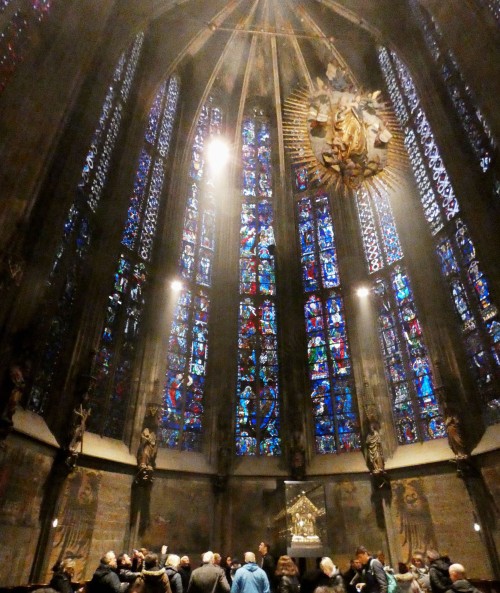 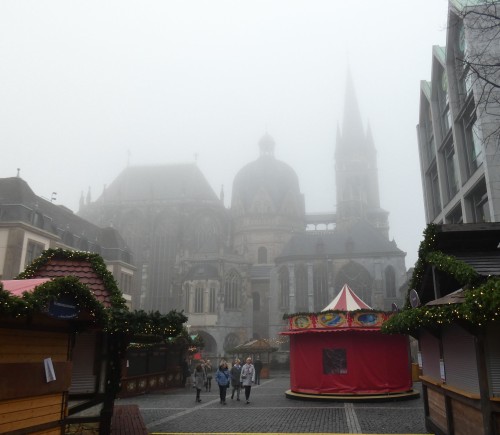 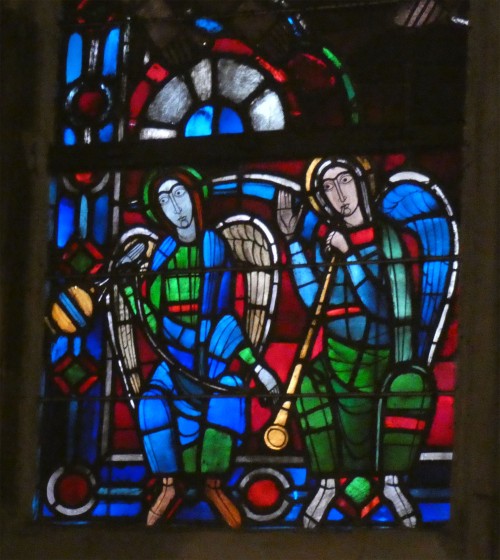 Stained glass angels in the Choir. Most of the glass was destroyed during WWII, and replaced in the 1950s with modern geometric patterns.

We took a guided tour, but I am not going to go into the history of the Cathedral.  There is a wonderful virtual tour and timeline online.

Instead I am going to show you some amazing textiles that are not available online, from an exhibit at the Cathedral Treasury — the one that houses this famous reliquary bust of Charlemagne.

(Notes on the photos:  All of these objects are in heavy glass cases, in very low light, so my pictures are not very sharp.  I took pictures of the caption cards, and translated them in Google Translate when I got home.)

First of all we have this little “Taschenreliquiare” or relics pocket.  I was very lucky to see this, because it was only on display because a more famous object, a golden book cover, was out on loan. 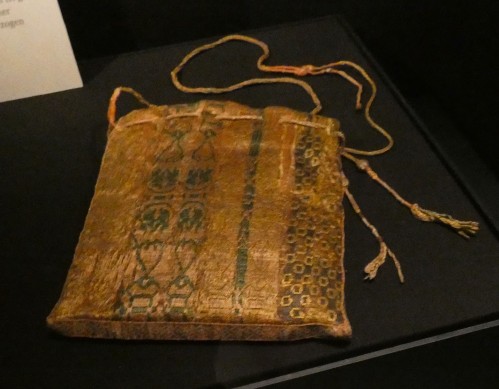 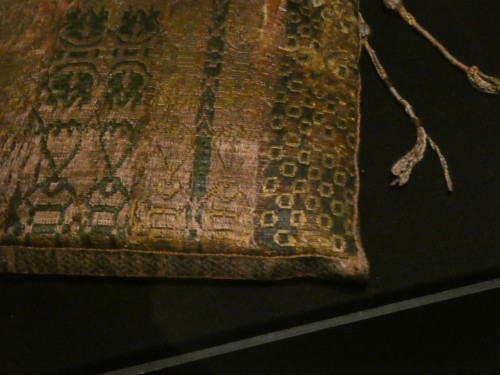 Relics Pocket
End of the 13th century or beginning of the 14th century
The almost square bag is a particularly well-preserved example of high-quality textile reliquaries, as they are rarely found today. There are hardly any signs of wear or color wear.
Pocket reliquaries are often used for the storage of cloth relics, presumably so this reliquary bag. Particularly striking is the green-yellow-pink-purple pattern of the silk fabric with dotted bands and plant motifs. The seams are surrounded by a gold band, which complements and completes the embroidery.
The green-white patterned straps and the drawstrings are still missing. It is easy to see when the drawstrings are pulled in one direction through the holes in the fabric.

Of course on this trip I was hoping to find out whatever happened to the mysterious “Cope of Charlemagne” I had read about.  I was unable to get any more information, but I did see this cope instead.  The photograph I took of the caption card is too blurry to read, but I think it says that this cope is from the 18th or 19th century. 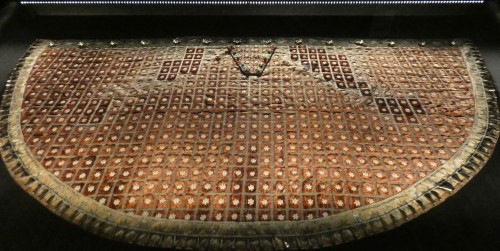 The main exhibition was “Mary’s Wardrobe,” a display of dresses made to clothe a statue of Mary and Baby Jesus that stands in the cathedral.  This type of statue is called a Gnadenbild, which Google translates variously as “picture of grace” and “miraculous image.”  Here is the Treasury’s introduction:

Maria’s Wardrobe
The Miraculous Image is a carved and colorfully painted Marian figure with baby Jesus from the 14th and 17th centuries. It stands to the right of the main altar in Aachen Cathedral.

In the basement of the cathedral treasury, our exhibition presents a total of 14 pairs of dresses for mother and child, which were donated to the Picture of Grace over time. With such donations, thanks were expressed or solicitation of the Mother of God requested.

Many of the dresses are worn by the Picture of Grace throughout the year, changing according to color and festivity. Others, on the other hand, are too sensitive for constant use and are therefore permanently housed in the textile magazine. They are exceptionally shown in this special exhibition, such as the robes lying in the showcase next to the staircase and the red dress set made of a warm petticoat on the left side of the large showcase. 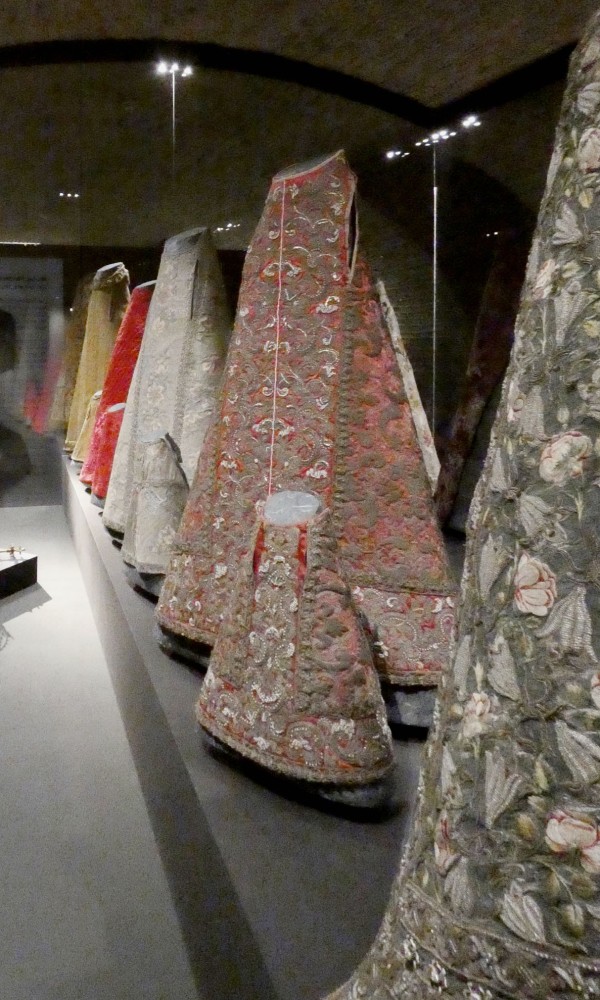 Row of dresses for the Picture of Grace, Aachen Cathedral Treasury.

The extremely precious pair of dresses that the Spanish regent Isabella Clara Eugenia donated in 1629 is famous. It is embroidered with more than 70,000 river pearls, a number of diamonds and large amounts of gold thread. The Picture of Grace wears this gown only for ten days every seven years during the sanctuary journeys. 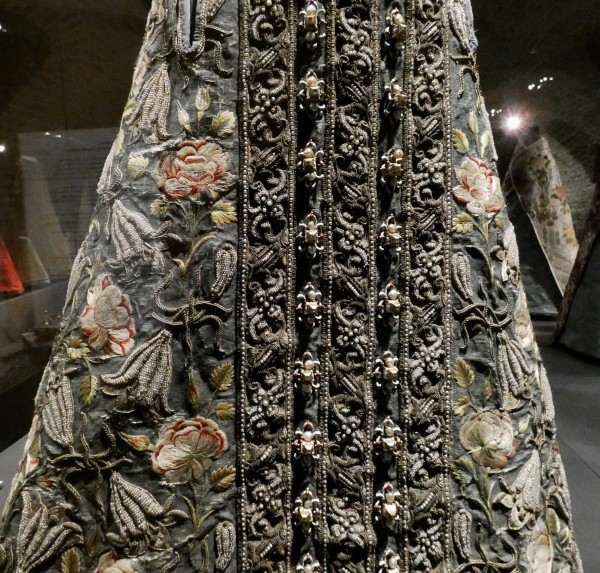 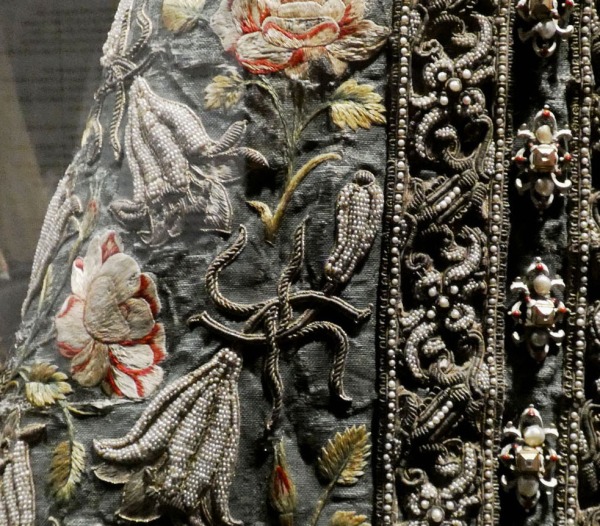 Isabella-Clara-Eugenia dress
Silver sheets embroidered with botanical roses, lilies in beadwork and trimming of diamonds in enameled frames,
Milan, 1629
The dress reflects the contemporary fashion of the then high nobility. Donation of Isabella Clara Eugenia, Regent of the Netherlands for the Spanish throne and, moreover, engaged in the Counter-Reformation. 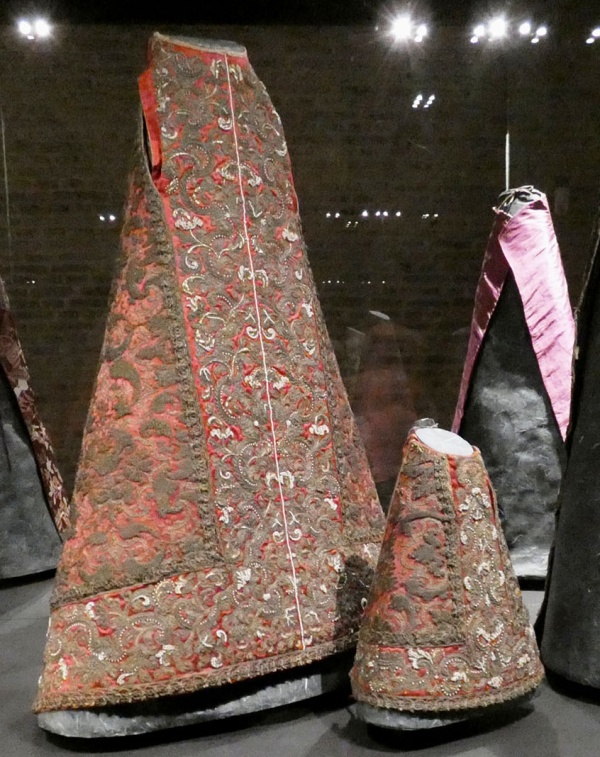 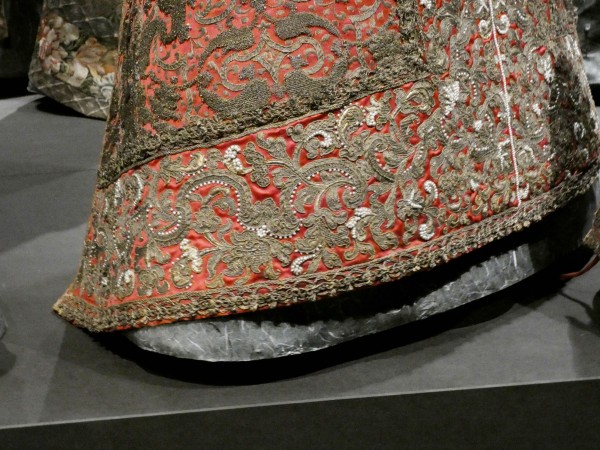 The dress is a gift from the mother of Emperor Joseph I on the occasion of his enthronement. The dress of the Miraculous Image has been customized to the donation of a double ornament to Mary’s Church. A commemorative plaque for these vestments is in the Hungary Chapel of the Cathedral. Empress Eleonora is said to have embroidered the clothes herself. 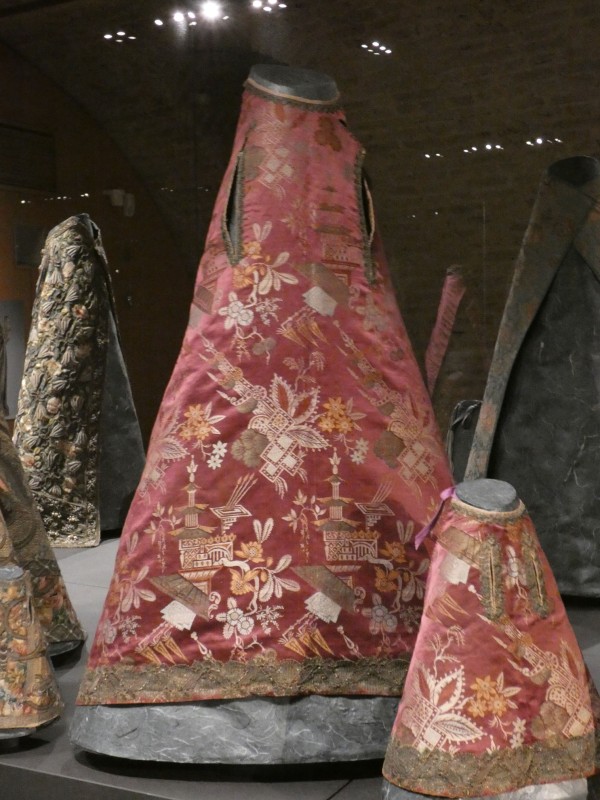 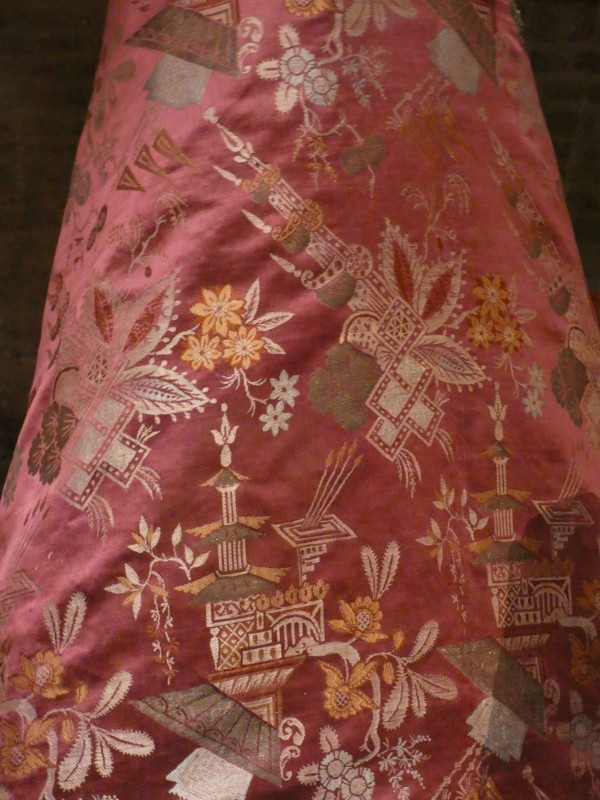 Amsterdam dress
Violet silk lampas with a broad metal trim at the bottom hem, Amsterdam, around 1705.

The extraordinary weaving of this silk reveals its origins in an Amsterdam production center, which had conquered a small part of the French market with exotic patterns. 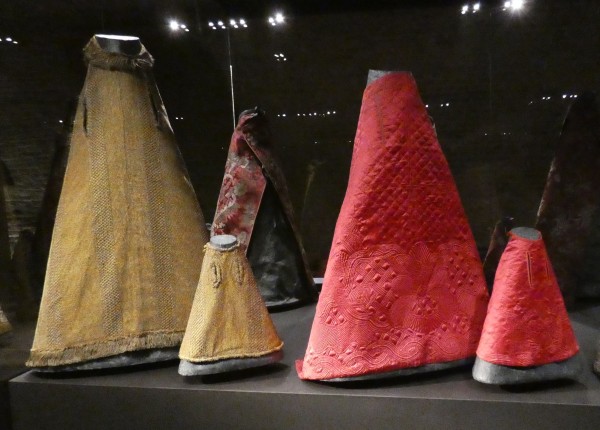 The sprang dresses and red quilted dresses. From the Aachen Cathedral Treasury. 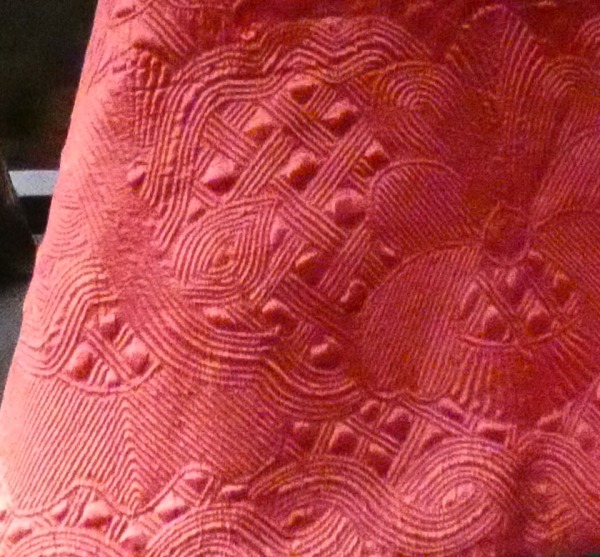 Red quilted dress
Red silk taffeta with quilted stylized floral pattern in rhombus grid, Aachen (?), around 1740
The dress was made from a warm underskirt. In the cold season, lined silk gowns peeking out from under the over gowns, were worn in the highest circles. 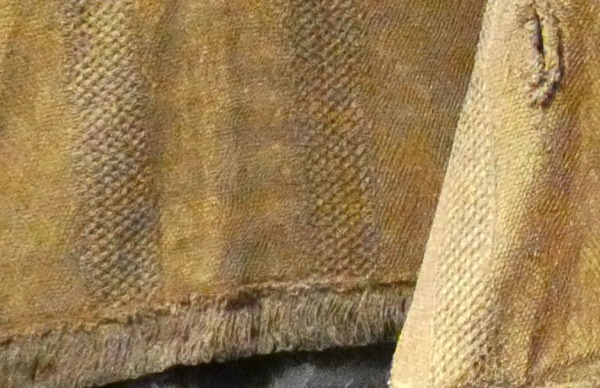 Sprang dress,
Yellow silk satin with gold net in sprang technique, Aachen (?), 1842
In the industrialized age of the 19th century, the ladies of the bourgeoisie had a lot of free time. To fill this time, needlework came into fashion. The dress of the Picture of Grace could be an example of this, because is made in the little-known sprang technique, also called “Egyptian patchwork”. It was made to match the golden Moiré regalia.

I have mixed emotions about displays like this.  I can understand wanting to give your best to God, but this extremely conspicuous consumption seems to go overboard to me.  However, it was a treat to see the incredibly skilled work of past centuries!