Following the Trail of An Old Ax-head

Back in the fall, as I was walking around our place in the Hill Country, I came across an ax-head sticking out of the ground.

Old ax-head, in the ground.

Of course I wondered how long it had been there, but I thought it would be pretty easy to find out.  Ranching-wise, our county has a short history.  The first white settlers got there about 1876, and the property that we have was sold for little ranchettes about 2000.  So that would give a window of only about 125 years it could possibly be from.

So back at home, I started searching online.  I thought there would be some nice chart of ax manufacturers trademarks, but no.  I have still not found information on this particular logo, but the search results brought up a name that matched the letters I could read on the ax-head — a J. E. Pilcher who worked for the Simmons Hardware Company of St. Louis.

When I read the words “hardware company,” I was thinking of a small corner-store, but the Simmons Hardware Company was not a retail store, it was a huge wholesaler, established in 1874 — 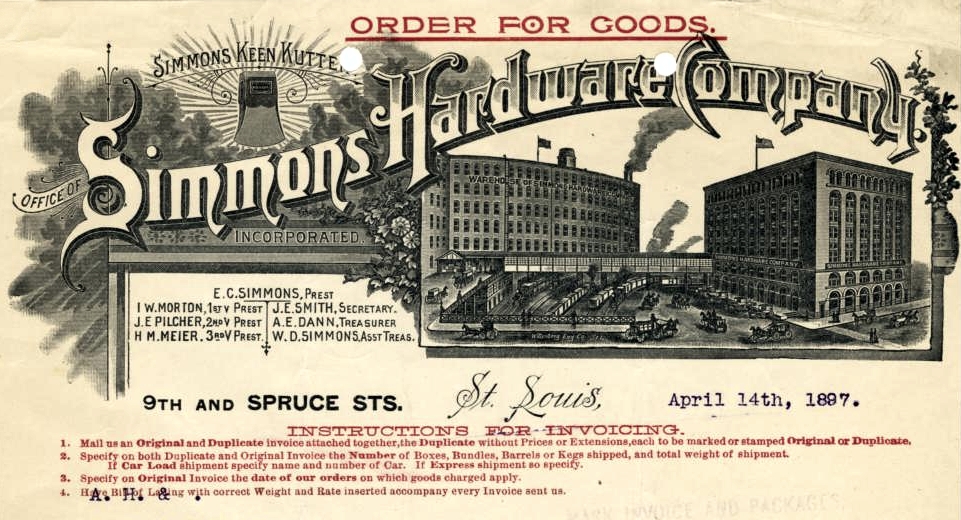 Reportedly Mr. Simmons would name products for some of his favorite employees.  One line was J. E. Pilcher’s Cant-B-Beat handsaws.

However, ax-wise, the Simmons Company sold “Keen Kutter” axes, and those have a large and distinctive logo.  More information about those is here at Collector’s Weekly  and here is another history, with good illustrations.

So perhaps Mr. Pilcher had his own company before he went to work for Mr. Simmons; I have not been able to find out.

We will come back to Mr. Pilcher in a minute, but at this point I got seriously side-tracked into the history of the Simmons Hardware Company.  We know a lot about their business practices and innovations, because one of their employees, Norvell Saunders, wrote a book called Forty Years of Hardware.  Saunders began working for Simmons in the 1880s, as a traveling salesman with a horse and buggy, in Kansas and Colorado.  I have never been the entrepreneurial type, so I wouldn’t have thought I would find a book on hardware sales appealing, but Saunders’ writing style drew me in.  He recorded the realities of traveling in newly settled territories, and dealing with all types of people, in a light and self-deprecating tone.  One of my favorite incidents was when he went into a brand-new town:

I remember driving from Wakeeny down to a town… twenty-five miles south.  When I arrived in this town, as there were no fences, I drove up to a new store building.  Without getting out of my buggy, I inquired of the gentleman who was shingling the roof where I could find Mr. Smith, who was going into the hardware business.  “I’m Smith,” answered he.  Then he sat on the edge of the roof and looked at me good and hard.  “How long have you been traveling in this territory?” he inquired.  I told him three years. “Well,” said he, “I want a $5000 stock of hardware.  Drive right back to Wakeeny, inquire about me at the bank, and send me the goods as quick as possible, but don’t get out of the buggy.” I thought this was a peculiar way to order the goods, but immediately returned without lunch to Wakeeny and found at the bank that Mr. Smith had plenty of money on hand for the stock.  I wrote up the order and sent it in.  Sixty days later I called on Mr. Smith and he was doing a wonderful hardware business in the new town.  When we became better acquainted I inquired why he instructed me on my first trip not to get out of the buggy, but to immediately drive back to Wakeeny.  He looked at me quizzically  and remarked: “I supposed you thought I was a d.f. for buying goods that way, but I knew if you ever got out of that buggy, you would sell hardware to everybody in town, and I thought it was worth a lot to me to be the first man to have a stock.  Say, son, there were three other men waiting for some hardware man to place their hardware orders.  Your hardware got here first and I sold most of it before any other hardware arrived.”

J.E. Pilcher appears in this book a few times, most fully in an account about cutlery sales.  Simmons had many cutlery products, but the traveling salesmen felt that showing samples to store owners was too time-consuming for the amount of profit to be made, and they concentrated on other products.  Once when Saunders was back in St. Louis headquarters, Mr. Simmons asked why his cutlery sales were so low.  Saunders defended himself by saying that the cutlery prices were just not competitive in his area; if he knew the true cost and had discretion in discounting prices, he could sell a lot more.  How much more?  Simmons asked.  Why double at least! brazened Saunders.

Simmons then pulled Saunders into J.E. Pilcher’s office, and directed Pilcher to create a special price catalog just for Saunders.  Pilcher objected strenuously to going to all this effort, but Simmons overrode him, and when Saunders left St. Louis to return to his sales territory, he carried a little red book of costs.  He soon realized that he now had no excuses, and made more of an effort to sell cutlery.

Several years afterward… J.E. Pilcher confided to me the fact that the little scene between himself and Mr. Simmons about that actual cost book had been carefully rehearsed beforehand.  “I suppose,” said he, “you felt very fine at having the president of the company overrule me and decide to give you a price book.  What you did not see, you long-eared production of Missouri, was the fact that you were committing yourself to double your sales on cutlery!”

In 1904, Simmons Hardware created an incredible display at the Palace of Manufactures at the Louisiana Purchase Exposition, also known as the St. Louis World’s Fair: A description of the Simmons exhibit, from page 3430 of an 11-volume book, Louisiana and the Fair: an exposition of the world, its people, and their achievements.

It was called the “Moving Picture of Hardware,” but I have not been able to find any video clips of it.

In 1915, they created a similar display for the Panama-Pacific International Exposition in San Francisco.  They published a booklet with the details of how they put it together.

One of the diagrams detailing the exhibit construction.

There was a river made of chain, and a waterfall made of revolving auger bits.  The sun’s rays were made from pruning saws and pointing trowels that revolved.  The entire State Seal of California was recreated too!  It must have been amazing to see.

From these displays, I went even further off-track into a 1911 book about retail window displays, The American Artisan Window Display Manual.  People would send in pictures of their displays, with details as to how they constructed them.

This display of baseball equipment includes Romeo and Juliet off to the left; not an association I would have ever considered.

A Thanksgiving display from 1911, showing the woman of the house preparing the feast.

I think my favorite display idea was “Ladies Furnishings”, in which 12 “hats” were created from hardware store items.  One was made from “a number 3 galvanized washtub, four lap robes, a washboard for a feather, and a duck decoy for a bird.”  Unfortunately that picture isn’t good, but I give the display idea major points for creativity.

“Ladies Furnishings,” hats made from hardware in a display window.

I would love to know more about the particular ax-head that I found.  I imagine a ranch hand was out chopping cedar, and the ax-head flew off the handle, and he just could never find it.  I have walked over the exact spot where I found it many times; I don’t know why I never noticed it before.  But I am glad it led me down this track of business history and the art of phenomenal displays!

23 thoughts on “Following the Trail of An Old Ax-head”