The other day I was reading Nana Cathy’s post about her monthly photo scavenger hunt.   I feel like I’ve had a little vacation when I follow along on these walks.  She had a photo of Castle Howard and said it might be familiar from  Brideshead Revisited.

I’ve never seen that series so I searched for it on Amazon.  But one of the other search results caught my eye –  The Story of the Costume Drama.  In five parts!   I love to watch those shows about the castles and stately homes that serve as sets for these dramas – they show historical photographs of the house, and how they adjusted the rooms for the series, and what the abandoned parts of the house look like now, and so on.  So when I saw this title, images flashed through my mind.   I expected interviews with costume designers, shots of rare fabrics stacked to the ceiling in out-of-the-way shops, dedicated technicians stitching pearls onto skirts for queens, directors laughing about costume malfunctions…  I couldn’t believe no one had ever done such a series before and I couldn’t wait to watch it!

Unfortunately I misinterpreted what the series is about.  The first episode, The Greatest Stories Ever Told, was an overview of all kinds of costume dramas that have aired from about 1970 onward.  Most of the ones they chose to highlight were on ITV, a television network in the UK.  The episode seemed to me like a 45-minute commercial for ITV’s achievements.  Also, for each series, they showed the most controversial moment, which resulted in the episode being a string of assaults, violence, and screaming fights.  I watch costume dramas to relax – I found this list of Dramatic Moments to be far from relaxing.

I wised up a little and skipped episodes two and three- The Stars, and Affairs of the Heart.  I’m not that interested in actors talking about themselves, and the narrator had already gushed several times about Colin Firth and his dive into the pond in Pride and Prejudice, so I thought I could safely skip those episodes.

Episode four – Picture Perfect – was finally what I was looking for.  It showed some of the locations that have been used in costume dramas, and some of the computer effects that have enhanced reality to help tell the story.  There was finally about ten minutes to discuss costuming and make-up!

This is from a historical park, not a real costume drama. We had a great location, but could have used a knowledgeable costumer.

I had always thought that all these productions would hire their own costume staff, but I learned that many of them use established costuming companies such as Angels: The Costumier.   Angels has eight miles of costumes hanging in their warehouse, and they offer tours!  I am willing to find out about an available date for a tour, and then plan a trip to London  around it!

I watched episode five – A Call to Arms – because I was hoping they would talk about how they research the uniforms of the different countries over the centuries, but no.  All I learned was that the uniforms of the 1700s and 1800s British navy made people stand up straight. 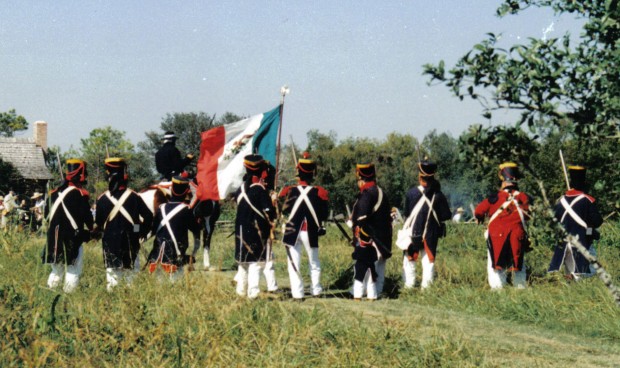 Mexican soldier re-enactors.  I think a show about uniform research could be fascinating!  PBS!  Are you listening?  Just how many times can we watch Josh Groban?

So I am still waiting for a fabulous series about costume designers.  But I did learn about some costume drama series I had never heard of before, so at least I have hopes of watching some enjoyable series while I wait for Season Four of Downton Abbey.