Eben Holden, A Tale of the North Country is a coming-of-age story set in the Lake Champlain area in the 1800s.  The story starts when the narrator, Willy, is 6 years old and recently orphaned.  Rather than let him be turned over to a “dissolute uncle,” the loyal hired man, Eben Holden, takes off with him and heads west.

The first five chapters are filled with their adventures on the road as they evade robbers, panthers, and the authorities.  Eventually they end up in a beautiful valley, and are taken in by the hard-working Brower family.

I can see this slender, blue-eyed woman as I write.  She is walking up and down beside her spinning-wheel.  I can hear the dreary buz-z-z-z of the spindle as she feeds it with the fleecy ropes.  That loud crescendo echoes in the still house of memory.  I can hear her singing as she steps forward and slows the wheel and swings the cradle with her foot:

‘On the other side of Jordan,
In the sweet fields of Eden,
Where the tree of Life is blooming,
There is rest for you.’

She lays her hand to the spokes again and the roar of the spindle drowns her voice.

All day, from the breakfast hour to supper time, I have heard the dismal sound of the spinning as she walked the floor, content to sing of rest but never taking it.

from Eben Holden, a Tale of the North Country, Chapter 13

So, as in the post on The Wide, Wide World, the spinning wheel being described here is a great wheel.  I will repeat the photo I used in that post. 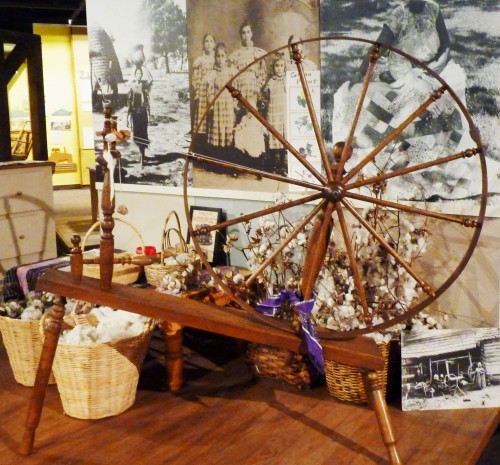 The exact year of this scene is not given, but from later events in the book, I would estimate it is supposed to show about the year 185o.  The author, Irving Bacheller, was born in 1859, but his character Willy is about 20 at the onset of the American Civil War in 1861, making Willy’s childhood memories earlier than Bacheller’s own.

Eben Holden was published in 1900, and was the fourth best selling novel that year, and the fifth in 1901.  Bacheller wrote in the preface:

Early in the last century the hardy woodchoppers began to come west, out of Vermont.  They founded their homes in the Adirondack wildernesses and cleared their rough acres with the axe and the charcoal pit.  After years of toil in a rigorous climate they left their sons little besides a stumpy farm and a coon-skin overcoat.  Far from the centers of life their amusements, their humours, their religion, their folk lore, their views of things had in them the flavour of the timber lands, the simplicity of childhood.  Every son was nurtured in the love of honour and of industry, and the hope of being president….

The characters were mostly men and women I have known and who left with me a love of my kind that even a wide experience with knavery and misfortune has never dissipated.

So his image of Elizabeth Brower spinning fits right in with his purpose in celebrating the pioneer spirit.   “Fleecy ropes” gives the impression she was spinning wool.  I think it is important to note, however, that alongside hand-spinning by any such sturdy and self-sufficient pioneers, industry was taking off.  Already by 1820, New York State was producing 1.4 million pounds of cotton on 33,000 mechanized spindles; and by 1850 there were over 1000 cotton mills in the US, processing almost 3 million pounds of cotton annually.*  Here is an excellent summary of the changes in the US textile industry during the 1800s.

Getting back to the book itself, my favorite parts were those that explained how things were done, for example, finding one’s way by capturing bees and then releasing them to watch their flight path, and surviving a blizzard when caught out with a horse and buggy.  But most of the book is just Uncle Eben relating colorful tales about fish, skunks, and practical jokes. And his speeches are written in dialect that gets old quick.  Here’s one example:

As with The Wide, Wide World, I skimmed a lot.

There is not much else textile-related in the book, but I do love this image:

From the top of a high hill we could see above the far forest, the red rim of the setting sun, big with winding from the skein of the day, that was now flying off the tree-tops in the west.

*This information comes from the US Census, and it is reported in a wonderful book, A Centennial History of Fall River, Mass: Comprising a Record of Corporate Progress from 1656 to 1876, by Henry A. Earl.

← Glimpses of Textiles in Old Novels
Laura I. Baldt and Clothing for Women →

16 thoughts on “Glimpses of Textiles in Old Novels, Part Two”